The Segye Ilbo reports that the cops may soon be using a new form of lie detector. 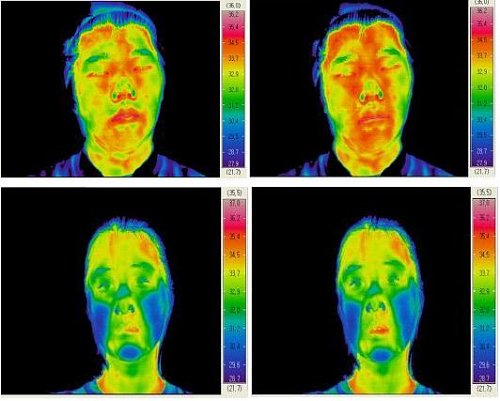 A method for detecting lies used as a “joke” in movies and TV shows is now being used in criminal investigations.

The forensic science unit of the Supreme Prosecutor’s Office (대검찰청 과학수사기획관실) announced on February 21 it plans to introduce the use lie detectors that work by estimating facial temperature through infrared light. Lee Jang-han, head of the research team at Chungang University that examined the validity of the system, found that the system was very effective at lie detection. The research team found that when a person tells a lie the sympathetic nervous system undergoes a sudden change, causing a surge in blood flow and an increase in temperature around the face and eyes.

The research team divided a group of 44 male and female college students aged 18 to 29 into groups of guilty and not-guilty, placing the guilty group in a scenario of stealing a wallet from the school’s computer room and the non-guilty group into a scenaria of sending an e-mail in the computer room, then asking them questions both related and unrelated to the crime while they sat in front of the lie detector.

A member of the prosecutor’s office spoke of high hopes for the system. “We plan to investigate people suspected of fraud and so on, and the facial temperature detection system should have a higher degree of reliability.”