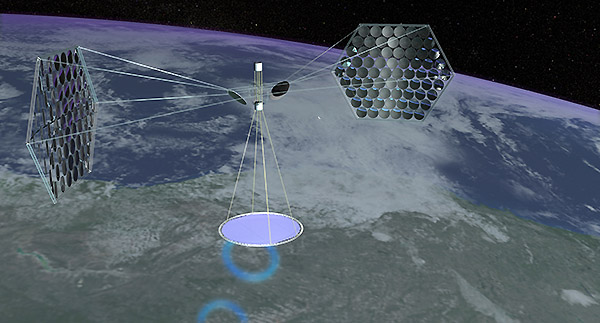 Chinese scientists are studying the possibility of building a space power station which would orbit the earth and accumulate a massive amount of solar energy. The energy would then be transmitted back to the Earth either in the form of microwaves or lasers. And no, this is not from the latest sci-fi movie. It is for real. On March 30, Xinhua reported that China is mulling the construction of the largest spacecraft ever built, which would surpass both Apollo and the International Space Station.

Xinhua reported the opinion of Duan Baoyan, a member of the Chinese Academy of Engineering, according to whom space-based solar panels can generate “10 times as much electricity as ground-based panels per unit area”.

In spite of the would-be station’s epic proportions, the idea of getting solar energy from panels positioned in space is far from new. It was pioneered by US scientist Peter Glaser, who researched this topic as early as in 1968. Years later, Mr. Glaser stated that accumulating solar energy “can be accomplished on Earth and in space to ensure that the aspirations of all people for a better life can be met without endangering the quality of life on Earth, in this century and in the more distant future.”

The US has been working on this possibility since the 1970s, while Japan began its own research in 1998, when Tokyo began developing a Space Solar Power System. In 2009, Japanese authorities tasked a research group which included 16 companies to come up with the technology needed to transfer electricity through microwaves.

For all these efforts, the creation of an operational solar farm remains beyond reach. In 2000, John C. Mankins , a manager with the Advanced Concepts Studies Office of Space Flight, told the US House Science Committee that the technologies needed for a full-scale in-space platform producing 1-2 gigawatts of power could be demonstrated at a prototype level by 2025-2035. “Very large-scale, in-space SSP platforms in the greater than 10-gigawatt power class,” will only become viable by 2050, according to Mr. Mankins.

Besides the huge gains it could deliver in terms of clean energy, China’s latest project is relevant because it provides yet more proof that Beijing is trying to step up its role in space-related technologies, a sector in which Beijing is already investing heavily.

After becoming the third country to independently send a human into space in 2003, China’s efforts to become a space power have been relentless, culminating in December 2013 with the launch of Yutu, a robotic rover that is currently exploring the surface of the moon. The robot has suffered a series of technical problems and its ability to operate is now impaired, but the debacle has not prevented Beijing from pursuing even more ambitious goals. Authorities are currently planning to send another rover to Mars in 2020 and create a manned space station by 2022.

This increasing fondness of space missions is motivated by Beijing’s desire to catch up with other countries – notably the United States – in the commercial and military spheres. Or, to put it simply, to acquire the great power status that Chinese leadership covets so much.

The budget is trailing the country’s ambitions: as of 2011, Xinhua reported that Beijing expenditure for its space program had been 20 billion yuan ($3.2 billion) between 1992 and 2005, while between 2005 and 2011 the government had already invested 15 billion yuan ($2.4 billion). The following year, the same agency quoted Wang Zhaoyao, an official with China’s manned space program office, as saying that Beijing had invested 39 billion yuan ($6.3 billion) in its aerospace program, meaning that in the seven years between 2015 and 2012 China had spent almost as much as between 1992 and 2005.

These numbers are a fraction of the United States’ budget, which in 2015 will total over $17 billion, but China is making good use of it. According to ‘China Dream, Space Dream,’ a report prepared this year for the U.S.-China Economic and Security Review Commission, “if the current trajectory of China’s space program continues, by 2030 China will have a new line of advanced launch vehicles, a robust, space-based C4ISR network made up of imagery satellites with resolutions well below one meter, and more capable electronic intelligence communication satellites linked together by data-relay satellites, in addition to a global satellite-navigation system that may gradually approach current GPS standards.”

The paper concludes that the strategy is aimed at becoming China’s capabilities in order to become “militarily, diplomatically, commercially, and economically” as competitive as the United States.