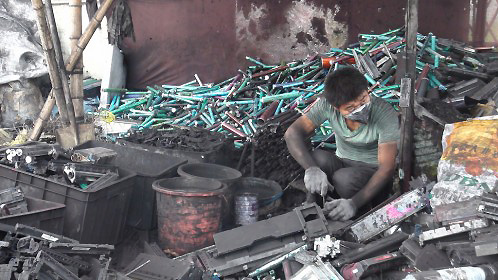 As the most populous country on the planet, and one that produces a staggering amount of electronic products, it is natural that China also creates the largest amount of e-waste. Yet the relative poverty of the PRC when compared to the developed world means that China does not yet have the same kind of universal consumer culture as Western Europe, Japan or North America. So naturally, on a per capita basis, China ranks quite low in terms of electronic waste production, alongside poorer South and Southeast Asian countries.

It is also the wealthy countries that are driving the lion’s share of China’s electronics production.

The people of developing countries are victims of a cruel system

According to a new report by the United Nations University, together the US and China produce 32% of the world’s e-waste, followed by Japan, Germany and India. However, the per capita leaders are mainly wealthy European nations, the top 5 being Norway, Iceland, Switzerland, Denmark and the United Kingdom.

China not only produces and exports many of the products that turn into e-waste, it also imports the e-waste itself, often illegally. When toxic waste is processed in unregulated, unsafe ways, substances like lead, mercury, arsenic and cadmium can enter the groundwater and air, poisoning local populations.

E-waste from the US in a dump in Guiyu, China. Pic: Basel Action Network (Flickr CC)

The problem of toxic electronic waste has grown alongside the growth of the tech industry, creating serious health and environmental problems, especially in poor countries. The phenomenal market penetration of mobile phones, laptops tablets, flat-screen televisions and other electronic devices has meant that methods of recycling and managing the waste are lagging far behind.

While we usually hear about the above products contributing to e-waste, by volume most of it is kitchen, bathroom and laundry equipment — nearly 60%.

A growing problem of missed potential

The UNU report shows global e-waste levels are increasing by 2 million tons a year, with only 16% recycled or reused. There are metals in that e-waste that are not only toxic, but also valuable. The report also revealed that among the 48.1 million tons of electronic waste thrown away during 2014, is an estimated US$10.5 billion worth of gold. The total value of recyclable e-waste produced in 2014 stands at around US$52 billion US.

E-waste in China, Africa and Latin America — much of it shipped there by US companies — is killing people. So perhaps instead of encouraging the often-dangerous and environmentally destructive practice of mining gold and other metals for electronic devices, the tech industry should be mining landfills or rather extracting both the dangerous and valuable materials from the e-waste before it ends up in a landfill.

While recycling and reuse may not be the cheapest solution in the short term, continuing to poison people and the environment is without a doubt the most expensive long-term course of action.