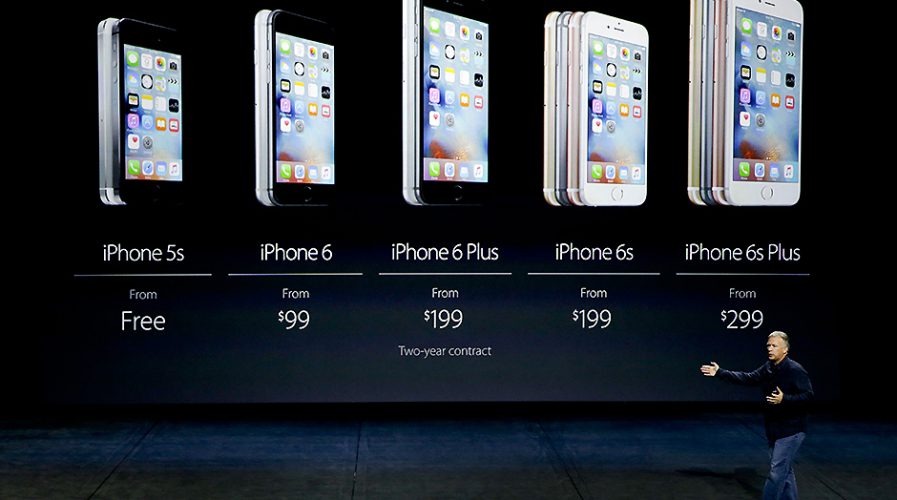 Phil Schiller, Apple’s senior vice president of worldwide marketing, talks about the pricing of the new iPhone 6s and iPhone 6s Plus during the Apple event at the Bill Graham Civic Auditorium in San Francisco, Wednesday, Sept. 9, 2015. (AP Photo/Eric Risberg)

The new iPhone 6s will go on sale on Sept. 25, with advance orders starting this Saturday, Apple announced at an event in San Francisco Wednesday.

That’s a week later than Apple’s typical playbook. Usually, new iPhones go on sale on the second Friday after their announcements.

The markets getting it right away are the U.S., Australia, Canada, China, France, Germany, Hong Kong, Japan, New Zealand, Puerto Rico, Singapore and the U.K.

The base models of the new iPhones will come with 16 gigabytes of storage, even as Samsung and other phone makers are now offering 32 gigabytes to start.

Most smartphone users are accustomed to “multi-touch” — the ability for phones to recognize touches from multiple fingers, enabling such capabilities as pinching to zoom.

Now comes 3D Touch. Pressing down hard on the new iPhones will launch additional capabilities. For example, you can get quick access to tasks such as taking a selfie or getting directions home. From a message, 3D Touch will give you a preview of a Web link without launching the browser.

Apple introduced this concept with some Mac laptops in March. It’s called Force Touch on other devices. Press for a few seconds on a document icon, and a preview pops out. Press on an address in an email, and a map opens up. On some video apps, the pressure determines how quickly you forward or rewind.

Apple Watch also has Force Touch. Press on the Workout app, for instance, to pause or end a run.

The new iPhones will have sharper cameras.

Apple says that the main camera on the iPhone 6s and 6s Plus will have a resolution of 12 megapixels. It’s the first increase since 2011, when the iPhone 4s got 8 megapixels, compared with 5 megapixels before.

But many high-end Android phones have long had more. Samsung phones, for instance, have 16 megapixels, while an upcoming Sony phone will have 23 megapixels.

And video recording will be improved to the Ultra HD, or 4k, resolution found on Samsung and Sony phones.

Apple says it will make a larger-screen iPad tablet aimed at business users.

The iPad Pro, as it’s called, will take advantage of new multitasking features coming to existing iPads. A software update will enable iPads to run two apps side by side, something previously limited to Samsung and Windows tablets.

With a larger screen on the new iPad Pro, apps running side by side will have more room to breathe.

The new iPad will have a 12.9-inch screen, compared with 9.7 inches for the current full-size iPad. It will have four speakers and options for a physical keyboard and a stylus, called Apple Pencil. Despite the larger size, Apple says it’s about the same weight as the original iPad.

Samsung made a tablet aimed at professionals last year. It had screens as large as 12.2 inches and also came with a stylus. More recently, though, Samsung has been shrinking the screens on its tablets.

The new iPad also marks Apple’s latest attempt to steal corporate customers away from Microsoft, whose personal computers have been business staple for decades. Microsoft makes a tablet designed for the needs of office workers called the Surface Pro 3 that sells at prices starting at $800. With a 12-inch display screen, the Surface Pro 3 is slightly smaller than Apple’s new tablet.

Although there has been a lot of speculation that Apple would do make a larger iPad, an announcement wasn’t expected until October. A release date and price wasn’t immediately known.

The new Apple TV was also unveiled at the event.  Apple’s set-top box is catching up with such rivals as Roku and Amazon’s Fire TV with the ability to install new apps on the device and to search for video with voice controls.

Apple has long insisted on controlling apps available on the device’s home screen. In doing so, it can ensure that menus and keyboards look and feel the same, whether you’re on Netflix or PBS.

But there have been many services unavailable on the home screen. To watch on the TV, viewers have had to launch those apps on an iPhone or iPad first and use a feature called AirPlay to get video on the TV through the home Wi-Fi network. Complicated.

Having app choices directly on the home screen make things simpler. To make sure everything runs smoothly, Apple created a new version of its mobile operating system called “tvOS.”

The app store also allows for non-video services, such as games and music.

A new remote has a Siri microphone button for voice commands such as “show me some comedies.”

Apple’s new Apple TV set-top box will start at $149 and will be available in late October.

The company will continue selling the existing model for $69, a price that had dropped from $99 in March.

The main Roku 3 and Amazon Fire TV devices cost about $100, though cheaper versions with fewer features are available — as low as $39 for the Amazon Fire TV Stick. Google also sells a Chromecast device for $35.

Maynard Um of Wells Fargo Securities has said that to justify a higher price, “Apple will have to provide significant innovation and functionality.”

The new Apple TV has new capabilities such as voice controls and non-video apps, including games and shopping. Even video apps will have more capabilities, including baseball stats and the ability to watch two games at once side by side.

It remains to be seen whether consumers will consider those capabilities to be enough.