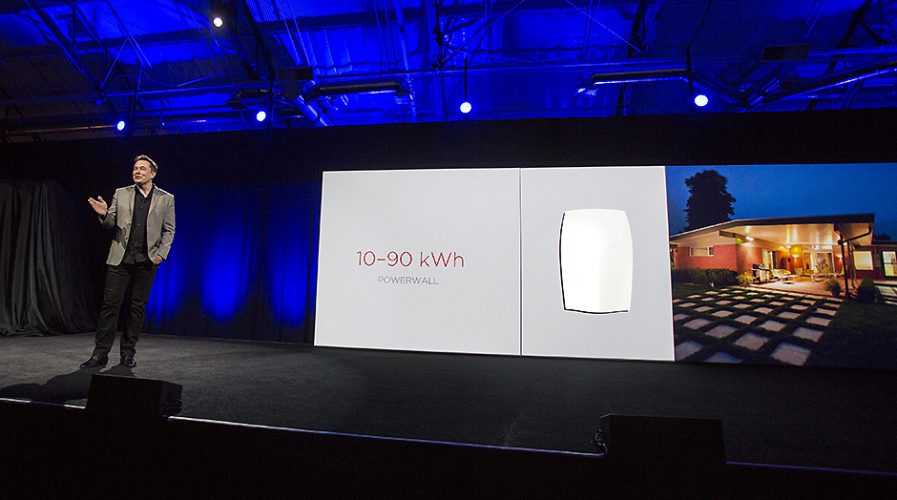 How significant is Tesla’s new solar battery and why is it debuting in Australia?

Though best known for fully electric sports cars and luxury vehicles, Tesla Motors’ home battery — or “Powerwall” — may be what cements the Palo Alto, California-based firm as a the leading player in domestic energy storage.

Is Tesla’s Powerwall a true game-changer?

Heralded as an “absolute game-changer” by the jury at the 2015 INDEX Awards — given by a high-profile non-profit organization that honors sustainable design — the Powerwall aims to revolutionize home energy.

By utilizing an array of rooftop solar panels, Tesla’s 7kWH lithium-ion home battery promises to charge during the daytime in order to power homes in the evening. A 10kWh model, which is more geared toward supplying electricity during power cuts and even providing independence from the utility grid, will also be available. The attractive and futuristic wall-mounted battery is set to be available in Australia by the end of the year.

The ability to adequately store energy from renewable sources, such as wind and solar power, is necessary for making sustainable energy a true alternative to fossil fuels. So far, as far as reliability goes, renewable energy has fallen short of adequately replacing established fossil fuel-powered grids.

Australia is a high-profile country, but relatively small in terms of population, meaning it is not home to a huge market. Furthermore, Australia’s government has been anything but environmentally friendly or pro-renewable energy in very recent years.

However, Australia’s solar sector is strong and solar panels are widely seen as a good thing. A lack of government support for solar on an industrial level seems to have allowed it to flourish in private homes, which is where Tesla’s battery comes in.

In spite of the fact the solar industry has been encouraged by a rebate design to pigeon-hole itself into small, dinky household solar systems while ignoring commercial, we’re now extremely good at rolling out small household systems with some of the lowest prices in the world. Also, this support structure for solar has meant we’ve rolled out solar where it most valuable and suitable: next to customers rather than in large fields hundreds of kilometres away.

Poor regulation leading to steep energy prices has unintentionally led to many homes and small businesses adopting solar. Besides, Australia’s wealth of sunshine is a vast natural resource. The country is ideal for photovoltaic (PV) solar panel power generation. The fact that so many homes already have PV panels installed makes it a great place for a major launch of compatible battery storage systems.

There are other companies with similar products to Tesla’s Powerwall, such as Australia’s own Redflow and Californian competitors Simpliphi. Established international electronic giants GE and Siemens also plan to enter the growing market for PV storage, while Samsung and Panasonic are already players in the game of residential energy storage. Japan’s Panasonic currently supplies lithium ion batteries to Tesla Motors and is now set to enter the home battery market in Europe. It may even manage to launch ahead of Tesla in Germany, the UK and France.

Tesla’s arrival is important because they have such a high profile. The Tesla product isn’t unique by any stretch, but it’s the Apple brand of the battery storage industry, they have the sex appeal that others don’t.

—Prof Anthony Vassallo, a sustainable energy expert at the University of Sydney (via the Guardian)

Tesla’s trump card might be its relatively new, outsider status in the global technology industry. Unlike multinationals like Panasonic and GE, Tesla has a stylish, niche image. It is more like a high-end boutique, while its main competition consists of giant superstores — think Apple circa 2000 vs. Microsoft and IBM. Tesla also has a comparable charismatic face in the shape of its founder and CEO, inventor Elon Musk.

Tesla may be able to make that jump from designer brand to mass market, as Apple did with the iPod and then iPhone (notably without lowering prices). The advantage of Tesla is that it is already on top, yet its standing cooperation agreement with Panasonic may result in Tesla maintaining a more high-end customer base with Panasonic and others supplying mass-market products.

Perhaps Australia is the best testing ground for the Tesla Powerwall. Success can rely largely on the private market with little government assistance to “taint” results for investors and critics of renewable energy’s viability. With lots of sun, and solar panels already in place, Australia is an interesting starting point for what could be a global revolution in home energy supply and storage. If energy independence from not only fossil fuel, but also the grid, could be achieved for a sizeable portion of the country, it would send a powerful message to the rest of the world, especially countries like India, which is clamoring for such a solution to its energy needs.