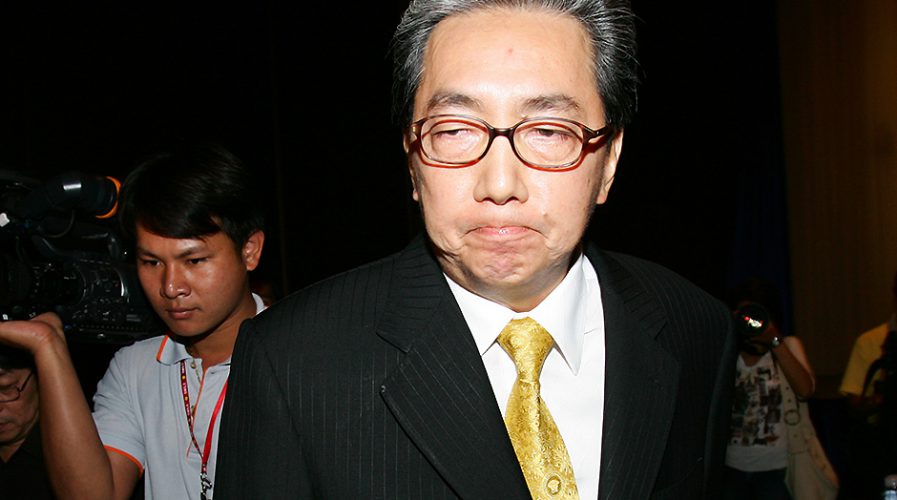 Despite denials, Thailand’s online surveillance plans are alive and well

“We will not talk about this any more. If we say we won’t do it, we won’t do it,” said Thai Deputy Prime Minister Somkid Jatusripitak at an economic forum in Bangkok last week. His decisive words were in response to the ongoing controversy over the Thai military government’s plans to introduce an online single gateway.

Last month, Thai internet users discovered a cabinet resolution surveying the implementation of a single online gateway ”to be used as a device to control inappropriate websites and flow of news and information from overseas through the internet system.” Subsequent resolutions ordered the Ministry of Information and Communication Technology (MICT) and related agencies to speed up their preliminary work.

If realized, Thailand’s internet traffic would be bottlenecked through a single gateway, making it possible for officials to filter and block undesirable content. This is in line with the military junta’s ongoing efforts to monitor and censor dissenting voices, both in real life and online, ever since it launched a military coup in May 2014.

Amidst widespread criticism and a coordinated mass-click-and-refresh bombardment that briefly knocked several government websites offline, Thai officials were scrambling to calm public opinion, only then to contradict themselves justifying why the junta wants to have a single gateway in the first place. The explanations varied from economic reasons, cybersecurity concerns and ultimately ending at Thai junta leader and Prime Minister General Prayuth Chan-ocha being initially ”worried” about the ”youth addiction to online games and access to inappropriate media”.

A week later, the government was hoping that the debate had died down. However, despite repeated statements insisting that it won’t pursue the single gateway plan anymore, not everyone is convinced by their declaration. And it seems there is more trouble coming the junta’s way:

Online activists have announced they will launch attacks against the government beginning Thursday after the prime minister said the project to route all internet traffic through a single point of control is still alive.

The coalition of anonymous internet users known as Citizens Against Single Gateway last night warned private sector operations with IT systems linked to government servers to transfer them to safe places before the assault on government systems begins at 10am on Thursday.

Those behind a crippling attack earlier this month, the Thailand F5 Cyber Army, issued the announcement yesterday after Prime Minister and junta chairman Prayuth Chan-ocha said agencies are still studying the project (…).

The little detail that the government is “still studying” the single gateway plan is enough reason for opponents to distrust the Thai military government. But there are several more signs that justifies the continuous skepticism by many online users.

CAT TELECOM has announced that it will proceed with the plan to build a national Internet gateway, which it claims would help make Thailand a digital hub in Asean.

The aim of the project is not to control the flow of information into the country over the Internet as some fear, said CAT acting chief executive officer Colonel Sanpachai Huvanandana. He said a working committee for the project would be set up. Whether that committee is under the Information and Communications Technology Ministry or under the Digital Economy Committee is up to the ICT minister.

The national Internet gateway is one of two priorities for making Thailand a digital hub for the region by expanding capacity and reducing costs. The other is to have large content providers such as Facebook, Google and YouTube establish servers in Thailand.

The other part of the plan to have internet tech giants like Google and Facebook setting up shop in Thailand (the latter already did) seems ambitious to say the least, given a potentially significant infrastructural disadvantage and previous persistent, but unsuccessful attempts by the military government seeking cooperation of these companies to censor posts deemed insulting to the monarchy and also identify their authors.

At the same time it is being reported that General Thaweep Netrniyom, the secretary-general of the Office of the National Security Council (NSC), could be appointed the head of the aforementioned CAT Telecom. It would be the first time that somebody from the NSC would take up that position at the state-owned telecommunication company and unsurprisingly his focus is expected be on cyber security – just as CAT’s current CEO (a Colonel nonetheless) announced they are still not giving up on the single online gateway.

However, as mentioned before, that is not the only measure by the military junta to control the flow of online information in Thailand. It already has blocked more than 200 websites deemed a threat to national security (source), ordered internet providers to censor on sight, reportedly also procured software to intercept encrypted SSL-connections and additional hacking and surveillance software, it is also in process of passing its so-called cyber laws, a set of bills aimed officially at “preparing Thailand for the digital economy”. But it also includes passages that enables widespread online surveillance, prosecution against intermediaries (e.g. website owners) and more legal uncertainty, benefitting the state more than Thai online users.

Most recently, Defense Minister General Prawit Wongsuwan announced on Tuesday the creation of a new ”Army Cyber Center” specifically to ”protect” the Thai monarchy and to ”keep track of information on media and social media and to sort them out systematically,” essentially underlining their priorities. In August this year, two people were sentenced to a record 28 and 30 years in prison respectively for allegedly posting Facebook messages deemed insulting to the monarchy.