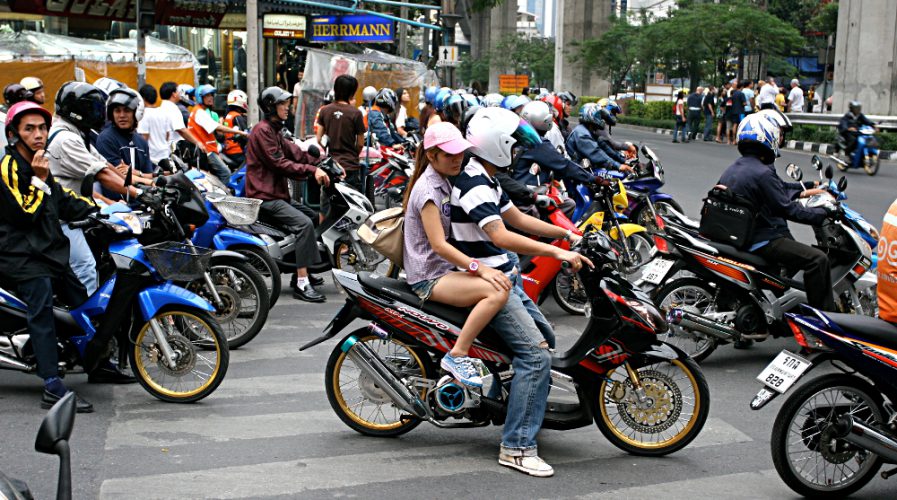 Moto-taxis are a popular form of public transportation in Bangkok. Pic: Wikimedia Commons.

MOTORCYCLE ride-hailing service UberMoto ground to a halt today with the temporary suspension of operations in Thailand. This appears to be an about turn after its earlier defiance of the government’s order for it to shut down.

The company announced that it would put the brakes on operations at around noon today, pending an outcome of discussions with the government. The company did not mention whether it would resume operations in the near future.

“Despite strong support from Thai riders and drivers, we have decided to temporarily suspend our Bangkok pilot, starting at noon while we work on creating modern regulations for app-based motorbike services with the Government,” it said in a statement on its website today.

Authorities have pointed out that they were not opposed to technological advancements for public transportation, but both UberMoto’s operators and their privately-owned motorcycles lacked proper registration.

uberMOTO service will be temporarily suspended while we work with the Government. uberX and BLACK will operate as usual. t.ubercom/motoTH

Despite the suspension the company said it was pleased to work with the Thai government, which expressed its openness to discussing new rules that would enable services like UberMOTO for passengers to operate.

“We’re grateful for their support when it comes to using motorbikes as couriers and to deliver food. This means we will be able to launch delivery services like UberRUSH and UberEATS as soon as possible,” it said, urging its customers to stay tuned to the developments.

Since rolling out operations in March this year, UberMoto drivers have gotten into several run-ins with regular motorcycle taxi riders, prompting a so-called “moto taxi turf war” on the streets of Bangkok.

Uber, which launched its ridesharing app in Thailand about two years ago, thanked its Thai riders and drivers for their “extraordinary” support.

It also announced that UberX and UberBLACK will continue to operate as usual — offering everyone a “safe, affordable, convenient ride in minutes all at the push of a button.”