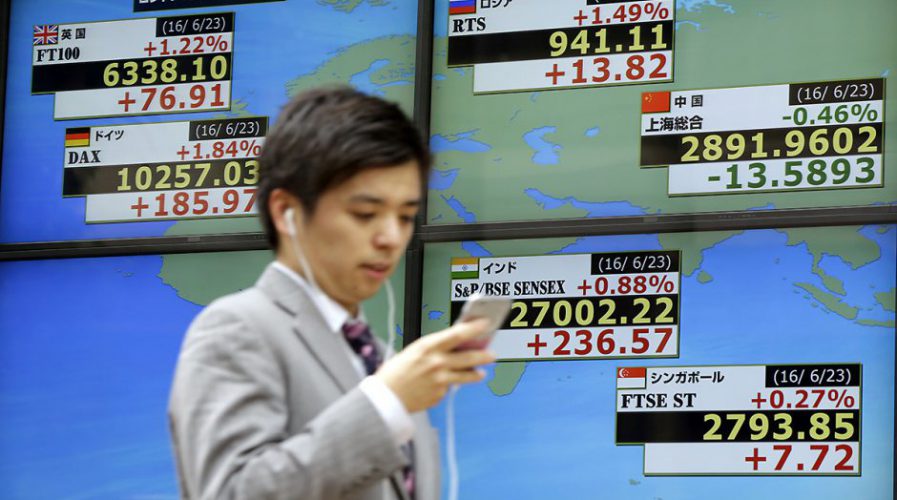 A man walks past an electronic board showing world stock exchange rates including Britain’s, top left, at a securities firm in Tokyo, Friday. Pic: AP.

Bloomberg has reported that the Asian stock market is steeling itself for the biggest shake-up it’s experienced in 10 months following Britain’s shock vote to quit the European Union in yesterday’s Brexit referendum.

As of just after 4pm in Hong Kong, the MSCI Asia Pacific Index had fallen 4.1 percent to 124.69, while Australia’s S&P Index futures dropped 3.3 percent.

The Hang Seng Index, also in Hong Kong, dropped 2.9 percent, while South Korea’s Kospi fell the most since May 2012.

While the British pound wavers uncertainly in the aftermath of Brexit, central banks in Asia have mobilized to avoid breakdowns in the financial-market liquidity, with Japan’s Finance Minister Taro Aso emphasizing that the central banks of six major developed nations have “currency-swap lines” to provide liquidity.

The “Leave” vote has culminated in Prime Minister David Cameron’s announcement that he will resign by October. In his address in front of 10 Downing Street, he said: “I will do everything I can as Prime Minister to steady the ship over the coming weeks and months but I do not think it would be right for me to try to be the captain that steers our country to its next destination.”

Britain voted “Leave” by 52 perecent, with 1,269,501 more votes than “Remain”. The Bank of England and the European Central Bank have pledged to shield the markets in the referendum’s wake, with the ECB promising to provide extra liquidity to protect the financial world.

THE British pound sterling is steadily falling as the BBC and ITV have called a Leave victory at the time of writing, with just 38 results left to declare.

The British currency fell to a 31-year low of $1.35 hours after hitting a 2016 peak of $1.50. Some news outlets reported that the currency was on track for its biggest ever daily decline.

Reuters reported that trading was halted for 10 minutes for Japan’s Nikkei futures as equity markets plunged ahead of official confirmation of the Brexit.

Uncertainty over the outcome Friday of Britain’s vote on European Union membership is keeping world currency markets on edge.

The pound fell in value against all the Asian currencies early Friday, dropping from 5.8 to 5.6 Malaysian ringgit in less than an hour.

Meanwhile, the yen strengthened as investors sought safety in the safe haven currency. The dollar slipped to 104.73 yen from 104.80 after earlier falling as low as 103 yen.

Stocks across the region were also volatile on Friday with Tokyo stocks and U.S. futures plunging as early U.K. vote results on whether Britain should stay in the European Union showed a tight race.

However, the momentum swung towards the ‘Leave’ camp as the morning wore on, which is set to win with 52 percent at the time of writing, according to Sky News Political Editor Faisal Islam.

At the time of writing, the BBC have called a Leave victory, as well as ITV.

We're calling it – We're out