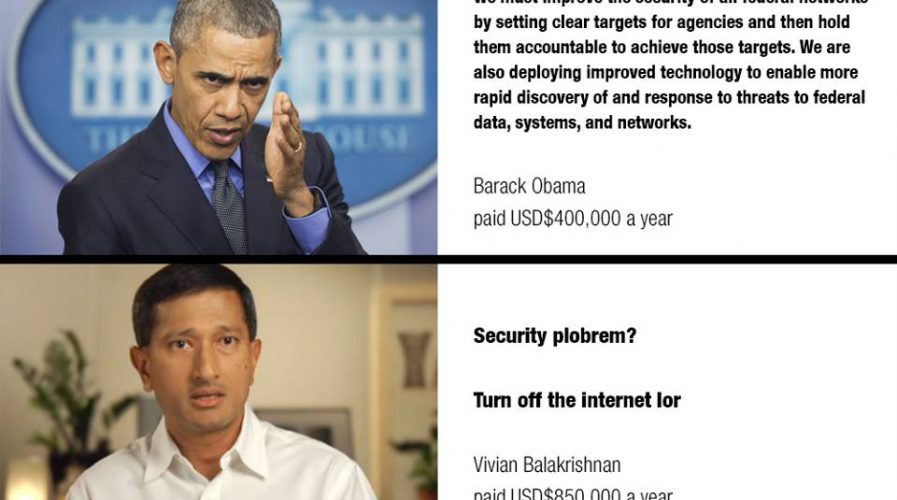 Singaporeans mock government’s move to cut off internet at work

SINGAPOREAN netizens have ridiculed the government’s decision to cut off use of the internet by civil servants at work in a bid to bolster security.

In the pledge, Obama said: “We must improve the security of all federal networks by setting clear targets for agencies and then hold them accountable to achieve those targets. We are also deploying improved technology to enable more rapid discovery of and response to threats to federal data, systems, and networks.”

SEE ALSO: Singapore: Public servants will be barred from using internet at work next year

On the other hand, Vivian was mocked for the seemingly ‘simplistic’ approach to securing government networks.

A user going by the name Dare Chia on Facebook is believed to have been the source of the image, also compared the salaries of the U.S. president and Singapore minister. Obama apparently earns US$400,000 a year while Vivian was said to earn double the amount at US$850,000.

In sharing the post, a netizen named Benjamin Ho weighed in on the “regressive” move.

“This is what I have been thinking about… Instead of looking for a solution or create programmes to safe guard, our govt does the silly way… No internet means security will be safe? They are suppose to be smart! Well I guess only book smart but street dumb,” he said.

Another netizen Kannan Kumar remarked sarcastically that the move was, “A summary of approaching a problem and solving it with precision.”

Once the changes are implemented, public servants will only be able to surf the internet using personal phones or tablets that do not have access to the Singapore government’s email systems.

Anyone who needs the internet for work will be given dedicated internet terminals. The move is aimed at plugging any potential leaks that may arise from shared emails or shared documents when employees use their work emails.