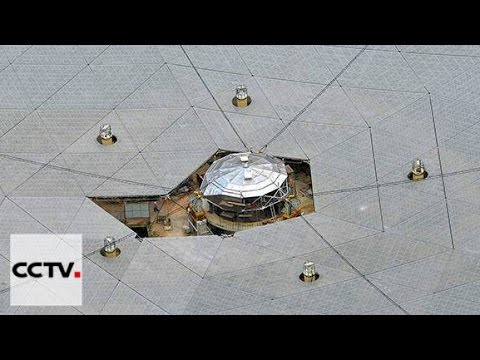 THE world’s largest radio telescope has been finished – after five years and over US$179 million (1.2 billion yuan). The Five Hundred Meter Aperture Spherical Telescope (FAST) was built with the very specific intention of finding alien life.

The telescope, which comprises 4,450 triangular panels, had its last panel fitted on Sunday morning in the southwestern province of Guizhou, according to state-owned media agency Xinhua.

Zheng Xiaonian, deputy head of the National Astronomical Observation under the Chinese Academy of Sciences, told Xinhua that scientists will now begin debugging and trial observations with the telescope.
He said: “The project has the potential to search for more strange objects to better understand the origin of the universe and boost the global hunt for extraterrestrial life.”

He added that the FAST would be a global leader for the next one or two decades. It is expected to begin operations in September.

An editorial in the South China Morning Post wrote: “If we are ever to make contact with aliens, China may play a key role through the largest radio telescope, designed to search for signs of life in distant worlds…”

FAST’s sheer size surpasses that of the now-second largest radio telescope in the world, the Arecibo Observatory in Puerto Rico, which measures 300-meters wide.

According to the Verge, one of the scientists involved in the building of the mammoth telescope said that its dish is big enough to hold five bottles worth of wine for each of the Earth’s seven billion inhabitants.