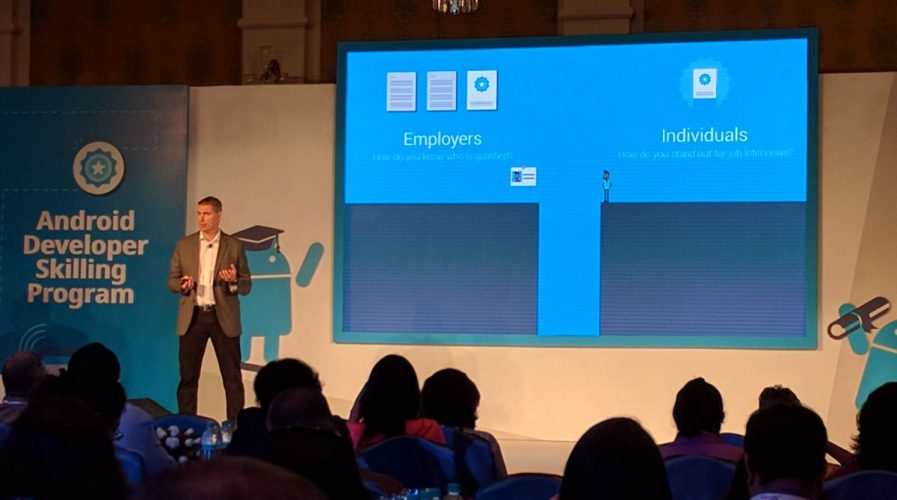 Peter Lubbers, senior program manager for Google developer training, at the launch for the Android Skilling Program in India. Image via @GoogleIndia on Twitter

GOOGLE has announced plans to train two million India developers on its Android mobile operating system over the next three years.

The search giant’s Android Developer Fundamentals, launched at an event in Delhi on Monday, marks an attempt to tap India’s growing digital workforce and establish itself in a major future market, which Google believes will be primarily mobile-based.

“India will have four million software developers by 2018, becoming the largest population of developers in the world. But today, less than 25 percent of these developers are trained to develop and build for the mobile platform,” Peter Lubbers, senior program manager for Google developer training, wrote in a blog post.

“There is a huge opportunity for India to become a global leader in mobile app development and we want to contribute and bridge the skills gap that exists today.”

The instructor-led course will be integrated into the Computer Science curricula for universities within the year and will also be available at training institutes of the National Skill Development Corporation of India, through various authorized training partners and the Mobile Computing e-learning course from the National Programme on Technology Enhanced Learning (NPTEL).

Course materials will be open-sourced to give those unable to attend training access and students will be able to sit an Associate Android Developer Certification exam online for US$96 (6,500 Indian Rupees), which Google says is mapped to the skills needed for entry-level Android Developer jobs.

Google isn’t the only company to have made moves into the Indian market. In May Apple announced it would open a development accelerator to support iOS app developers in Bangalore.

“By fighting for these developers, Apple and Google are showing how serious they are about the Indian market,” Ankit Jain, assistant vice president product at website and app market analytics provider SimilarWeb, wrote in an e-mail to Bloomberg.