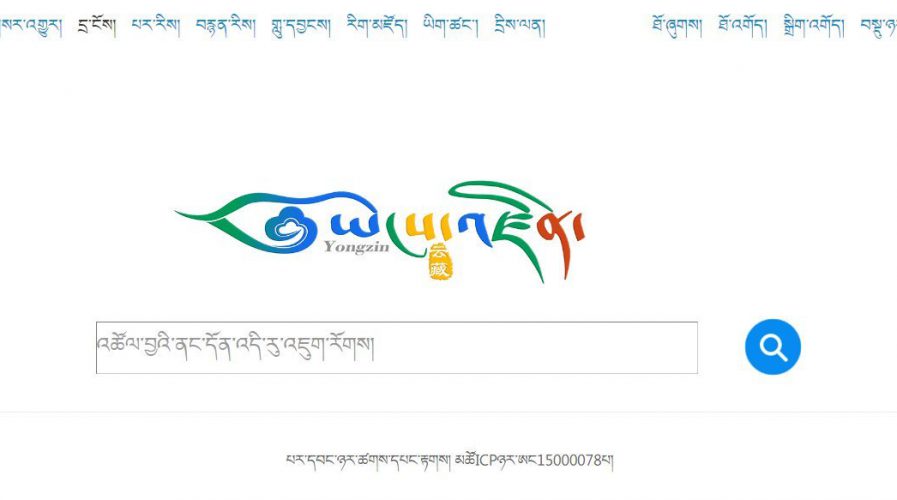 DESPITE strict control over information access in Tibetan regions, China has launched the first-ever search engine solely in the Tibetan language, called Yongzin.

The search engine reportedly aims to serve as a “unified portal for all major Tibetan-language websites in China, reports state-owned news website, China Daily. It is the result of a project that started in 2013, which was supported by the Chinese government and cost about US$8.7 million (57 million yuan).

‘Yongzin’ translates to ‘master’ or ‘teacher’ in Tibetan. The search engine includes different local dialects such as Amdo, Kamba, and U-Tsang, and is expected to attract around 1.2 million users in its initial stage.

Tselo, the director of the Tibetan Language Work Committee of the Hainan Tibet Autonomous Prefecture in Qinghai, was quoted saying: “The search engine will meet the growing needs of the Tibetan-speaking population and facilitate the building of Tibetan digital archives and the expansion of databases in the Tibetan language.”

The project relied heavily on Tibetans, with 80 percent of the 150 people hired being of Tibetan ethnicity, according to the project’s technical director, Dora.

He said: “Popular search engines such as Yahoo and Google enable searches in Tibetan, but they mainly support searching with single characters.”

News of the search portal is relatively surprising, considering how strictly China monitors and censors information within Tibet and Qinghai, where censorship rates stand at 53 percent and 52 percent respectively, compared to 12 percent in Beijing and 11.4 percent in Shanghai.

SEE ALSO: Despite being blocked, Twitter estimates it has about 10 million users in China

In an era where information seems so freely available and accessible, it could not be further from the experience of Tibetans who live under highly-controlled circumstances.

There is a possibility that Yongzin will be used by the Chinese government to monitor what Tibetans want information on, and it will probably be subjected to the same amount of heavy self-censorship.

The bans, issued specifically to monks in the Amdho region of north-eastern Tibet, reportedly declared that sharing information on social media is an illegal act of “leaking state secrets” and “engaging in separatist activities”.