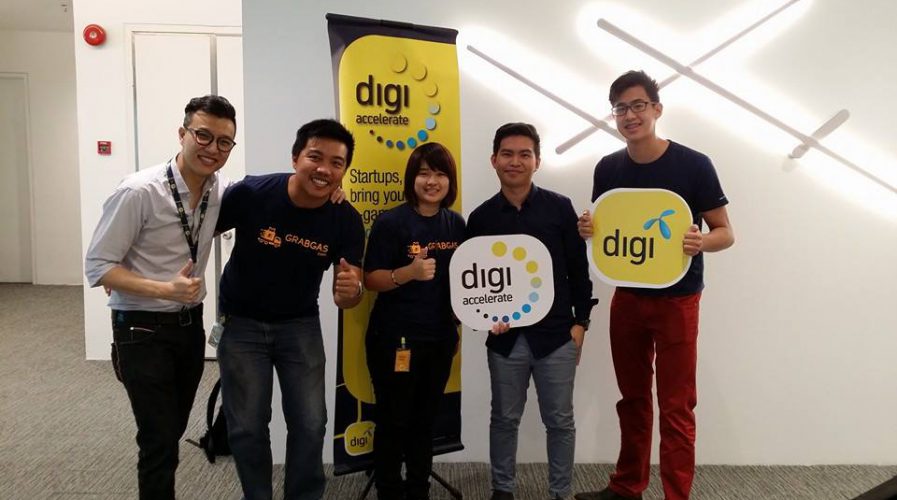 The GrabGas team qualified for the Digi Accelerate Program after former CTO Julian Ee completed their tech. Image via GrabGas via Facebook

When a former CTO published a blog post detailing how a Malaysian startup used him to build their product from scratch on a false promise, the entire startup community was up in arms. In response, Digi Telecommunications, who earlier this month announced a US$61,880 (RM250,000) investment in the startup along with two others, said it will carry out a comprehensive review into the matter.

Last week, Julian Ee blogged about how GrabGas, a Malaysian cooking gas delivery startup, invited him to be a “shareholder” and to get their platform up and running. In two months, Ee said he had delivered a website, content management system (CMS), API endpoints, and app.

However, about five months after joining GrabGas, Ee was told that he was in fact an “early employee” rather than a shareholder, and claimed the startup used his technical expertise for free.

Ee wrote: “Essentially when they said ‘join us as one of the shareholders’, what they actually meant was that they wanted me to work for them (a startup with no traction, revenue, funding, or tech), as an early employee, for free (no salary) for an indeterminate period of time, all the while building their entire tech/product from scratch, and helping them to secure Petron and Digi Accelerate (3 business guys with no tech guy and no resources is not going to qualify).”

To back his claims, Ee included screenshots of conversations between him and GrabGas founders Jeson Lee, Sean Hoo, and Gabriel Lim over Facebook Messenger and WhatsApp. The screenshots show Lee saying: “We are more than glad to have you as one of the shareholder[s].”

But later conversations show the trio freezing Ee out after GrabGas qualified for the Digi Accelerate Program, and Ee requested an introduction to the program mentors. Hoo tells him: “Sorry to say that after discussing with the team we are not able to link you up with mentors, and for the reasons we don’t feel comfortable revealing it [sic].”

“Digi Accelerate is intended to nurture and grow new businesses, and we saw the potential in and opportunity to help GrabGas develop their business.

“Having said that, we have a strict zero tolerance policy on proper business conduct by our partners, vendors and all parties within our value chain, and expect them to uphold the integrity of their way of work and dealings with us. In this respect, we will perform a comprehensive review with regards to this matter to ensure these standards are met and adhered to.”

GrabGas also confirmed the incident through a Facebook post addressing Ee’s blog post. They wrote: “We have had some challenges in coming to an agreement in our negotiations with Julian, and we hope to continue dialogue to find a solution if Julian is agreeable.

“The issue at hand is a matter between GrabGas and Julian, where all other parties mentioned or implied in the blogpost played no part in this issue.”

Other entrepreneurs and developers have weighed in on the saga, with many condemning GrabGas for their practices:

Is #GrabGas saga the mark of young M'sian entrepreneurs' integrity and character? Is this a homegrown cancer?

Not to mention the drama also a VCs killer! No investor going to get close the startup. Nor hiring. #BadPR #GrabPopcorn #GrabGas

Some others took pleasure in watching the saga unfold:

He made no indication about whether he would be taking any action against GrabGas or that they were currently searching for a solution, but thanked everyone who supported him.

Hello Guys and Girls, Fellow Entrepreneurs and Members of the Startup Community.First and foremost, Thank you very…