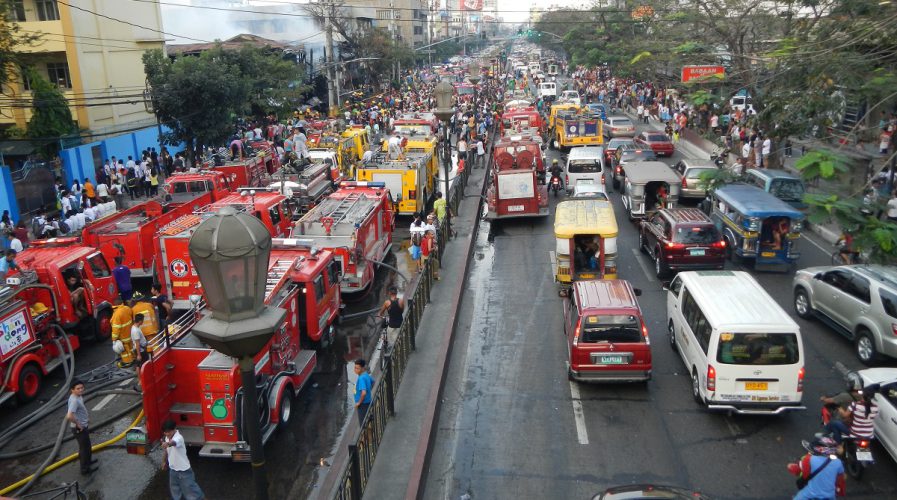 Metro Manila has the world’s worst traffic, according to studies and surveys. Pic: Wikimedia Commons

Manila traffic: How can tech solve ‘carmageddon’ and stop billions in daily losses?

WEDNESDAY was just another ordinary day for commuters in the eastern sectors of Metro Manila, along with the surrounding cities and municipalities of Antipolo and Cainta in Rizal. With light traffic, the 6.7-kilometer urban stretch of Marcos Highway usually takes 15 minutes to traverse.

But then, a disastrous combination of road accidents, an ongoing railway construction project, poor coordination among local government units, and an excessively large volume of vehicles contributed to what has been described as ‘carmageddon’, where people got stuck in traffic jams for three or four hours.

This day-long rush hour lasted from early morning until early evening. The bottleneck extended to another six-kilometer stretch up Sumulong Highway, in the suburban hills of Antipolo – usually a comfortable, scenic route.

The worst traffic in the world

Metro Manila has actually been cited in a Waze survey as the city with the worst traffic, and with the longest average commute times.

EVACUATE. It's the only sane solution. #carmageddon has no emergency solution. @rom @jesterinexile @RosarioLocsin pic.twitter.com/ERbwoPeW3H

With a population of 12.8 million people, it seems that infrastructure in Manila has barely caught up with urban growth and a fast population density rise. According to Professor Arsenio Balisacan, former socioeconomic planning secretary, the cost of Metro Manila traffic jams amounts to a staggering US$51 million (PhP 30 billion) on a daily basis. This includes the cost of lost productivity, lost business opportunities, and the expense associated with higher fuel consumption and vehicle maintenance.

Perhaps technology can provide a short- to medium-term solution for urban cities’ traffic woes. In 2012, I wrote about how local startup Tripid was trying to optimize private car trips through carpooling. This was a time before Uber and Grab became popular in Asian cities, and ride-sharing was only beginning to get recognized in other parts of the globe.

When I spoke to Tripid CEO Michael Ngo Dee, he stressed how tech can help improve the traffic situation, but that it was only incremental. After all, when people carpool, it reduces the number of cars on the road. But when a ride-sharing app like Uber encourages even more people to buy new cars to get into the business, this somehow introduces a counterpoint to the problem it’s trying to solve in the first place.

In some ways, the rise of ride-sharing apps might even have contributed to the traffic congestion by acquiring new cars en masse and paying hired drivers a commission, like taxis. This, in effect, defeats the purpose of establishing a ride-sharing platform that intends to use existing resources, as well as the purpose of sharing private rides, since the owners of fleets who hire the cars end up as glorified taxi operators.

In an interview with Top Gear Philippines, a former Metro Manila Development Authority director estimates that apps like Uber and Grab may have contributed an additional 10,000 to 15,000 new vehicles into Manila’s roads. This doesn’t sound like much compared to the 2.5 million new cars registered in 2015 alone, but these cars still add to the congestion.

Urban planning is the way to go

Proper urban planning is, perhaps, the best long-term way to address traffic in any metropolitan area. However, Prof. Balisacan himself admitted that government investments in infrastructure are unable to keep up, due to funding and time constraints. So even with the planned expansion of the metro’s light railway transit, deployment of a bus rapid transit (BRT), and an ongoing vehicular reduction scheme (vehicles are banned one day in the week), congestion continues to plague the city.

SEE ALSO: What is a ‘Smart City’ and where does Asia rank among the world’s best?

Case in point: even the train systems in Manila are so congested that one has to queue for at least an hour just to take a 12-minute end-to-end train ride. Transit managers have tried to ease queue congestion by introducing touch cards that riders buy on an ad-hoc basis. The improvement was brought about by a technology-oriented solution, albeit with limited applications.

Urban planning is effective before a city’s population even starts ballooning. It’s the most effective when starting fresh – just like how China builds cities before anyone inhabits it, or how Pakistan transferred its capital from Karachi to Islamabad to ease congestion (among other economic and security reasons).

What can we do?

For now, a combination of technology solutions can help ease the negative effects of traffic congestion on the economy and on productivity.

Telecommute. For example, I am personally a big advocate of remote working and freelancing arrangements, having done so for over a decade. With cloud-based collaboration and workflow management solutions, businesses can save on infrastructure and transportation expenses. Employees won’t have to waste hours commuting to the office, and achieve better work-life balance. Freelancing also opens up opportunities for both employers and workers outside of city and national borders.

Carpool. Hailing an Uber or Grab car is only the start. Uber’s introduction of their carpooling option, Uber Pool, is an excellent way to optimize an under-utilized resource: the extra number of seats in one’s car. This is particularly useful in urban areas, although I’d like to see more workers commuting to and from the suburbs using it more often.

Maximize existing resources. Here’s where apps also play a part. The likes of Deliveree and Grab Express provide an alternative to traditional logistics providers for small e-commerce entrepreneurs. Such services maximize vehicles that are already on the streets by turning drivers into ad hoc couriers.

Use data smartly. Individuals can use apps like Waze and Google Maps to help plan their routes, potentially saving time, fuel and energy in the process. A simple rule of thumb: when you think braving traffic will only be a waste of time, consider postponing your meeting or errands. You can simply teleconference or do online transactions instead.

Urban planning can only go so far, especially with an already-established metropolis. Meanwhile, technology offers short- and medium-term solutions. Short of an upheaval that will shift the country’s capital from Manila to a ghost metropolis, solving the city’s traffic woes will require a mix of social, technological and infrastructural changes. Perhaps most important of these is a change in discipline and mindset among citizens, which involves better social responsibility.