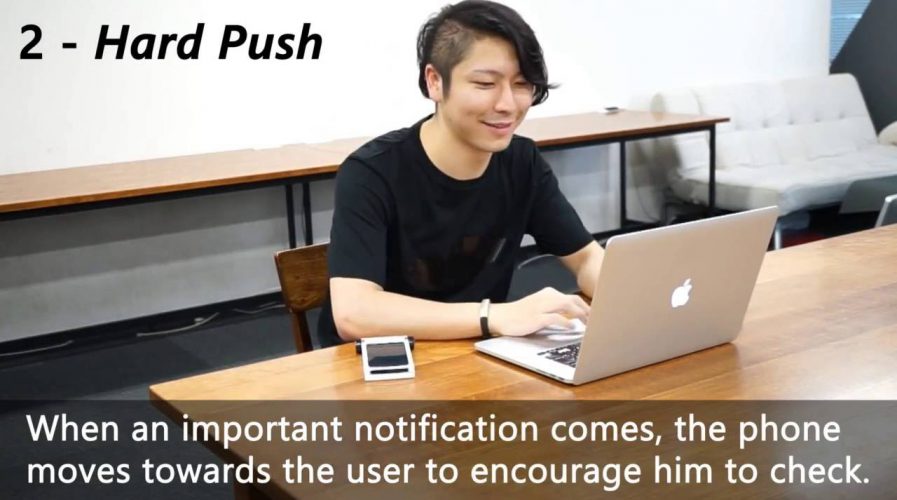 RESEARCHERS in Tokyo have created a phone case that almost gives your phone a mind of its own – it can run away to stop you from hitting snooze, bring you a parcel, and nudge you when an important notification comes in.

The nifty case is the brainchild of researchers Takefumi Hiraki, Koya Narumi, Koji Yatani, and Yoshihiro Kawahara of the University of Tokyo. The video posted by Hiraki demonstrates the case’s tricks, which was created to explore “the interaction for smartphones with kinetic capabilities”.

The 3D-printed prototype is fitted with a circuit board that has micro-controllers, a USB-serial converter, motors, motor drivers, rotary encoders, and – crucially – a set of wheels.

The video shows how the case controls the phone’s movements. It doesn’t just go back and forth, it can also rotate to the side and with motor actuation, it can even push loads across a surface.

The ‘Runaway Snooze’ feature works with an alarm app that is enhanced by motion. The case senses when the user is reaching for the phone after an alarm goes off, and moves away from the hand, forcing the user to wake up (cruel, but useful).

‘Hard Push’ is activated when an “important notification” comes in, and moves towards the user to nudge them into picking up the phone. Handy for people who don’t pay much attention to their phones after setting it down.

Another great feature is that the case allows the phone to measure the width, height, and depth of a space using ‘Scale Trace’, which is the only feature that needs to be carried out manually.

The prototype may come with some faults, as pointed out by Motherboard, such as maneuvering across uneven surfaces or falling off high platforms – hopefully the Tokyo team comes up with ways to address these concerns.

The wheel case is due to appear in the 29th ACM User Interface Software and Technology (UIST) Symposium in October, which will be held in Tokyo.