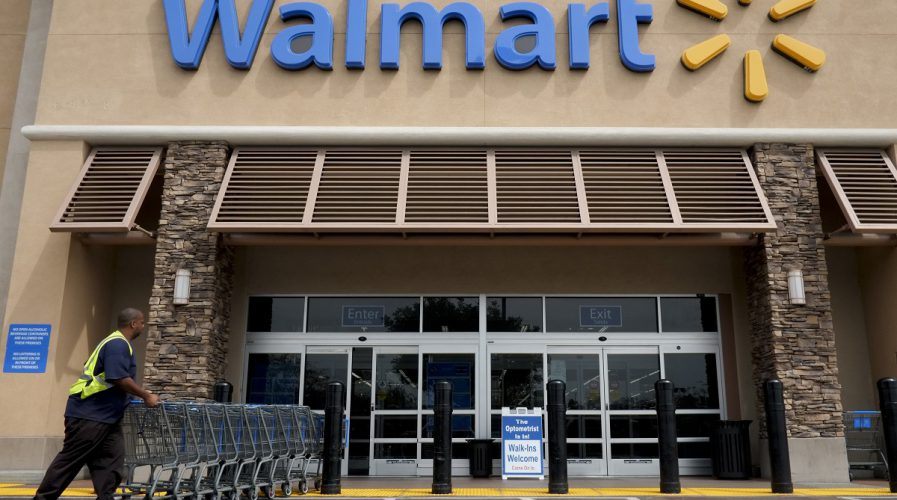 A worker pushes shopping carts in front of a Wal-Mart store. Wal-Mart got kicked out of Amazon’s websites, preventing them from competing with Amazon’s listings. Pic: AP

RETAIL giant Walmart is looking to take on its online nemesis Amazon in India by exploring an equity partnership in with local e-commerce leader Flipkart, according to reports.

The news will be welcomed by the Indian company as it gears up for a major battle for sales with Amazon around the Diwali festival season next month. An alliance could give Flipkart access to Walmart’s global supply chain making in return for a foothold in the Indian e-commerce market that would have taken the American firm years to build.

Early talks have already taken place and a further meeting is due to take place this week, sources told the Economic Times. The scale of the deal is currently unknown though it would be a minority stake.

One of the sources said a “strategic deal” similar to the US$1.5 billion Walmart paid in June for a 5 percent stake in Chinese e-commerce firm JD.com is likely.

Now this will be interesting
Walmart, Flipkart may gang up on Amazon https://t.co/ai08C8bdFJ via @EconomicTimes #ecommerce #war #Whowillwin

The alliance would make sense as Amazon is challenging both companies retail supremacy in their home countries. In August, Walmart purchased e-commerce firm Jet for US$3.3 billion to take on Amazon online and if Flipkart goes ahead this war could spill over into India.

Walmart already has a bricks and mortar presence in India with 21 Best Price wholesale stores across the country, but a joint venture with Bharti Enterprises for consumer facing stores fell through after a corruption inquiry into its Mexico operations prompted an in-depth probe into its India operations that stalled all plans.