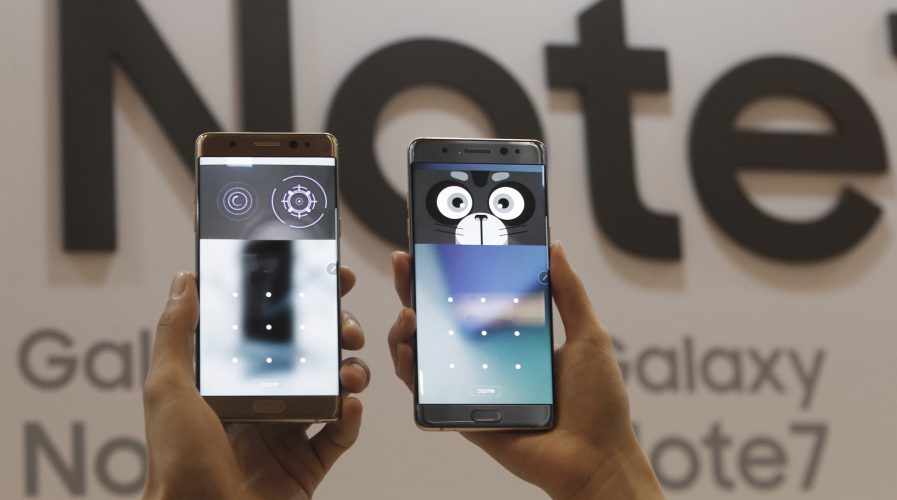 Models display the iris scanner features of the Samsung Galaxy Note 7 smartphones during its launch event at the company’s headquarter in Seoul. Pic: AP

SAMSUNG is expected to announce a recall for the first time of its Galaxy Note 7 smartphones due to several reports of the devices exploding.

According to the Yanhop News Agency, an unnamed company official said the recall will be announced in under a week. He was quoted saying: “The most important thing is the safety of our customers and we don’t want to disappoint our loyal customers.”

The company will also announce results of its investigations into the explosive incidents along with countermeasures.

The South Korean electronics giant has met with some stumbling blocks in quality control testing and recently put shipments of the Galaxy Note 7 to the nation’s top three mobile carriers to a pause, reports Reuters.

This could be a major setback for Samsung’s position in the smartphone ecosystem, especially when main rival Apple is set to reveal the new iPhone 7 next week.

Everything We Know About The Apple iPhone 7 https://t.co/ckFAAssQmn #iPhone7 #appleiPhone7

“A decline in Samsung’s average selling prices and profits appeared inevitable given the current problems with the Galaxy Note 7,” he said.

Another major blow happened after a user posted images of a burnt Galaxy Note 7 on a South Korean website. The phone allegedly exploded while charging. Other similar incidents have also been reported by South Korean media.

According to a report by Hyundai Securities, the device’s issues could be related to modules or parts and this matter should be rectified in a few weeks.

Samsung said that the Galaxy Note 7 is far exceeding demand, resulting in product shortage and causing the postponed launch in some markets. But it is actively finding ways to increase production and meet demand.

On the other hand, the Galaxy S7 and Galaxy S7 edge which launched in March were a huge success and increased profits in the first half of this year.