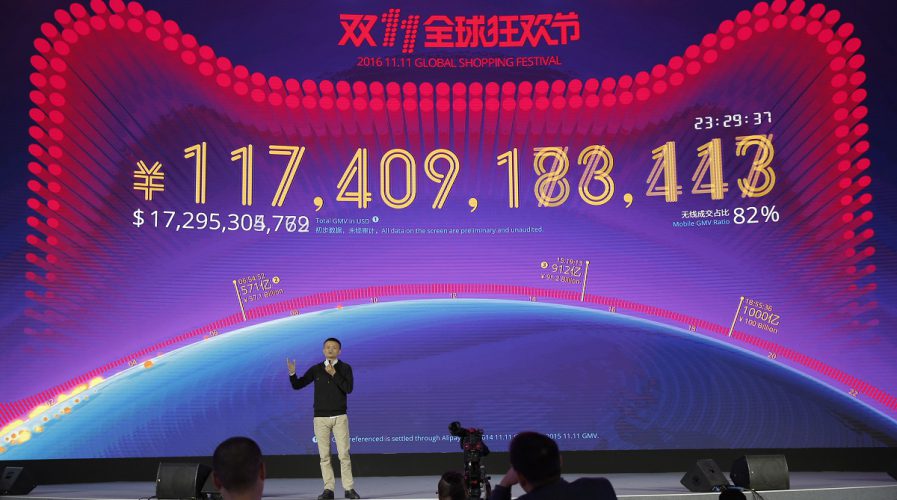 SINGLES’ Day, the world’s most epic shopping event of the year, has come and gone. Unsurprisingly, Alibaba shattered last year’s sales records of US$14.3 billion by selling US$14.69 billion worth of merchandise by 3pm on November 11. To put this into perspective, Black Friday in the U.S. reached just US$4.5 billion in sales last year.

Held annually, this year’s event was quite the flashy affair – as Alibaba ran a four-hour show in Shenzhen with the likes of Scarlett Johansson, David Beckham, and Kobe Bryant all making appearances. Jack Ma even got up on stage to perform magic tricks.

Alibaba’s mobile wallet app, Alipay, also saw a huge uptake in transactions that day – exactly 1.05 billion transactions went through the app which is up 48 percent from last year.

Regulators were quick to put a damper on Alibaba’s impressive sales reports though, as the SEC launched an investigation into its accounting practices this year. The reason for the probe? It takes issue with the way Alibaba is measuring Singles’ Day as per its GMV – the metric used to measure the total value of what was sold in Alibaba’s stores.

As reported by TechCrunch, since Alibaba charges its merchants for advertising instead of taking a cut of sales, the GMV figures are “somewhat of a distraction from the actual revenue [Alibaba] is pulling in.” The total sales reached US$17.79 billion by the end of the day, although figures don’t include shoppers returning merchandise, which could be as high as 30 percent.

Beyond Alibaba’s regulatory scuffles, a particularly interesting takeaway was the heavy use of mobile on on Singles’ Day. By 1pm, it was reported that 84 percent of all sales was transacted over a smartphone. This is compared to the shopping habits of those in the US, where only 35 percent  of sales happen via mobile on big shopping dates.

Alibaba has also been enlisting the help of VR to let Chinese shoppers buy from the likes of Macy’s, one of the largest department stores in the US. By next year – there’s no doubt in our minds that technology that’s considered newfangled today, will be fairly commonplace in the shopping experience.

#VirtualReality is here at #double11 where I virtually shopped @Macys all the way from #shenzhen pic.twitter.com/rlKfZvJn28