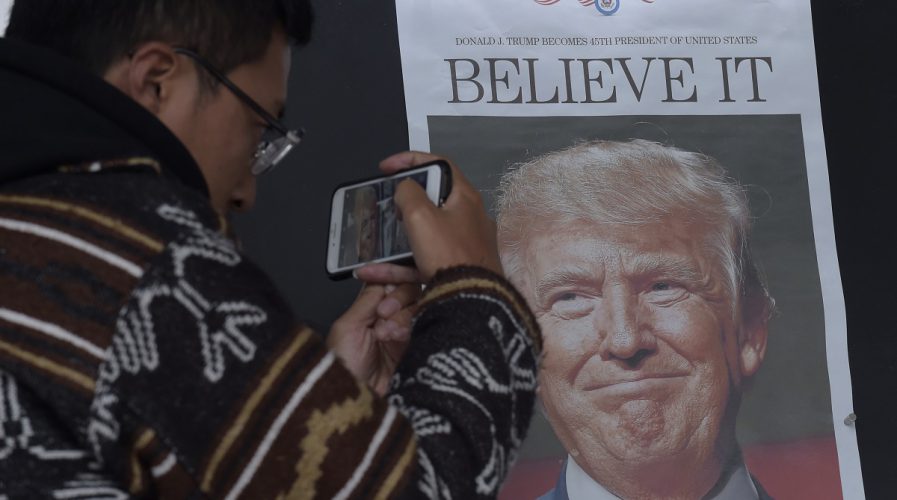 The election of US President Donald Trump has sparked a wave of protectionist sentiment that has hurt Chinese interests in the US. Pic: AP

Eye for an eye: China to take ‘tit-for-tat’ road if Trump engages in trade war

CHINA has warned that it would make life difficult for the U.S. if president-elect Donald Trump were to start a trade war against it, in an op-ed published in very vocal state-owned newspaper, the Global Times.

It wrote that the Chinese government would not hesitate to “take countermeasures” should Trump declare China as a currency manipulator. The president-elect has spent much of his campaign in the past year criticizing the U.S.-China relationship – in May, he said during a rally: “We can’t continue to allow China to rape our country, and that’d what they’re doing.”

Trump has repeatedly maintained that China manipulates it currency in order to make exports more competitive on the global market, and consistently claimed that the country is “killing” the U.S. when it comes to trade. His unsubstantiated claims have been met with derision from China before.

One of his promises was to impose steep tariffs on Chinese imports, but the Global Times dismissed this as “campaign rhetoric”. It wrote: “The greatest authority a U.S. president has is to impose tariffs of up to 15 percent for 150 days on all imported goods and the limit can only be broken on the condition that the country is declared to be in a state of emergency.”

The newspaper pointed to a time when the U.S. trade and commerce authorities announced a 35 percent import tariff on Chinese tired under the Obama administration, and said China’s retaliation resulted in losses for both countries.

“China will take a tit-for-tat appraoch then,” it wrote. “A batch of Boeing orders will be replaced by Airbus. U.S. auto and iPhone sales in China will suffer a setback, and U.S. soybean and maize imports will be halted.

China foreign ministry sounds cautious on Trump: "China-US trade cooperation has benefitted US people instead of hurting their interests"

Top China exports to the US, US to China pic.twitter.com/331G2y8Tjf

“China can also limit the number of Chinese students studying in the U.S.,” the Global Times added, in a muscle flex sure to intimidate American universities that benefit from millions of dollars plowed into their institutions by rich Chinese students.

China’s President Xi Jinping spoke on the phone with Trump on Monday to congratulate him on his win, and to express his willingness to work together. Xi was quoted by Global Times as saying: “I attach great importance to China-U.S. relations and am ready to work with the U.S. side to carry forward bilateral ties and to better benefit the two peoples and the rest of the world.”

While it looks like Trump has cooled off his anti-China rhetoric for now, it’s early days yet and no telling what his volatile nature will bring to the presidency. However, China is unlikely to play nice if he were to attempt strong-arming them into his will – and plenty of businesses from both countries will suffer as a result.