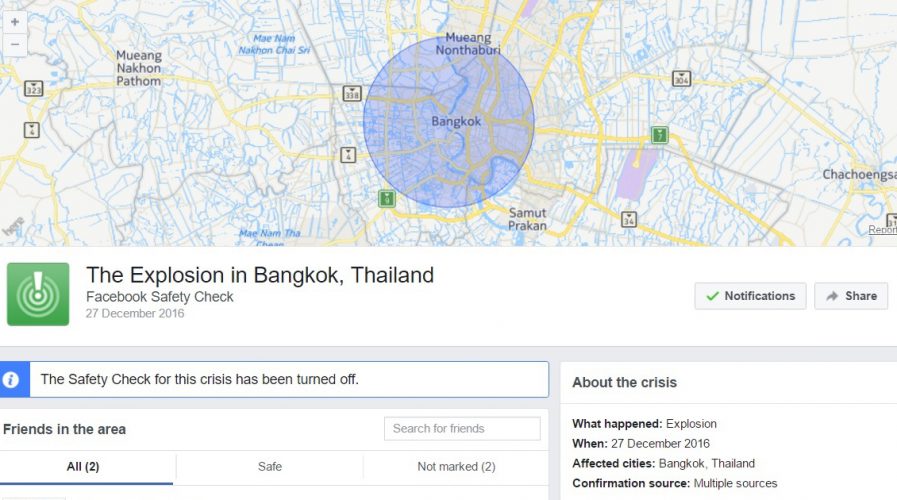 BLAMED for causing panic over a bombing in Bangkok that never took place, Facebook Thailand has defended its Safety Check tool, saying the feature was activated because local media reports had confirmed an explosion in the capital.

According to Bangkok Post, Facebook explained in a statement Wednesday that a “third-party entity” had enabled its Safety Check feature in the area late Tuesday. The social media giant reportedly cited four news reports published Tuesday morning to support its claim that the incident had been confirmed by local press.

“Safety Check was activated on December 27 in Thailand following an explosion. As with all Safety Check activations, Facebook relies on a trusted third party to first confirm the incident and then on the community to use the tool and share with friends and family,” a spokesperson was quoted as saying.

But Bangkok Post pointed out that the reports Facebook referred to were all about a one-man protest that had taken place earlier in the day involving “giant firecrackers”. None of the media outlets had reported an “explosion”.

During the incident, the man reportedly climbed a roof near the Government House in an attempt to make a point about his land ownership issue. Khaosod English reported that the man waved around what he claimed to be a large bomb but police later said it was merely an item shaped like a bomb.

The "source" of the @Facebook Safety Check for Bangkok: A fake news site that scrapped stuff from elsewhere…! pic.twitter.com/i6Q2k8XBxP

Bangkok Post said Facebook in its statement also went on to explain the functions of its Safety Check feature, which is intended for users to report a crisis in a particular area and to inform their loved ones that they are safe.

Facebook said it used to control activations for the tool before, but it decided in November to allow members of the community to do it themselves in order to improve on speed and responsiveness.

“With every activation, we are continuing to learn how to make Safety Check better for communities in need and continue listening to feedback to make the tool more useful and relevant in future,” the Facebook spokesperson said.

In the Tuesday incident, Facebook users in Thailand were alerted by the Safety Check feature to an explosion that had supposedly taken place in Bangkok.

The alert titled “The Explosion in Bangkok” caused confusion when it also promoted a link to a Dec 26 report in bangkokinformer.com that referenced a BBC breaking news video about an explosion in Bangkok. However, the video in question was taken in 2015 during the Erawan shrine blast. The website is currently undergoing scheduled maintenance and cannot be accessed at the time of writing.

The "source" of the @Facebook Safety Check for Bangkok: A fake news site that scrapped stuff from elsewhere…! pic.twitter.com/i6Q2k8XBxP

This incident is not the first occurrence where the social media platform’s algorithm had failed to distinguish between reliable and false news sources.

The Verge, a technology news and media network, highlighted that back in March this year, the social media network had mistakenly asked users in the UK, U.S. and other countries if they were affected by a bombing in Lahore, Pakistan. Facebook had blamed the confusion on a “bug” and apologised to those who had received the notification.

** This article first appeared in our sister publication Asian Correspondent