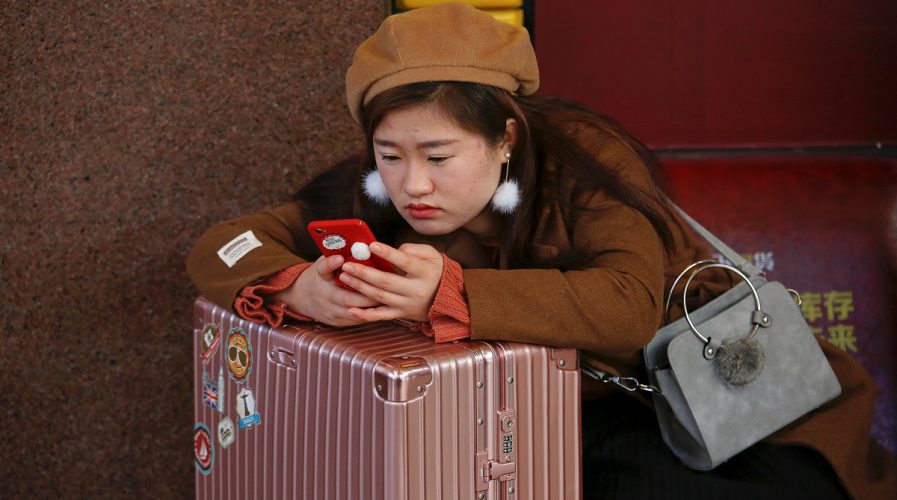 A passenger checks her phone at a waiting hall of the Beijing Railway Station in central Beijing. Pic: Reuters

AS China gears up for Lunar New Year, when hundreds of millions of people head home, popular software charging extra to improve the odds of getting coveted rail tickets has been criticized by state media and some users as being akin to modern-day touting.

Plugged by app developers as a way to simplify purchasing, the use of the “ticket snatching” software has ballooned in recent years as more people buy on mobile devices.

“High demand for rail tickets during the New Year season cannot be an excuse for snatching apps to rob consumers, disturb public order and even push up the price,” People’s Daily, the official newspaper of the ruling Communist Party, said in a commentary earlier this month.

Chinese citizens will rack up 3 billion trips during Chinese New Year as the economy grinds to a halt https://t.co/J1hithhcvF pic.twitter.com/eZokhVC9in

The Chinese authorities say they want to ensure equal access to rail tickets for all during Lunar New Year, which starts on Jan. 28 this year; about three billion trips will be made in the world’s biggest mass migration.

The number of buyers outstrips seats available on trains, and leads to long queues and jostling for position when tickets go on sale.

When purchasing moved online, “snatching” software sprang up from travel and techcompanies hoping to increase users’ chances of making it to the front of the virtual queue.

Shuang Xu, who works for a travel company in Beijing, started looking for tickets to her home city of Chongqing two weeks before she planned to leave for the New Year, but the official train booking website, www.12306.cn, kept crashing.

Xu paid 60 yuan extra to buy two high-speed train tickets, worth 1,535 yuan, from the capital to the southwestern city.

“I had no choice but to try other ways,” she said.

In 2017, almost half of all train tickets are expected to be sold via mobile apps compared to 27 percent in 2016, according to a report by Zhixing Railway Tickets, a booking app company bought by online travel agent Ctrip in 2015.

Software provided by the likes of Ctrip.com International Ltd and search engines including Qihoo 360 Technology Co gives users a better chance, though no guarantee, of securing a spot on China’s trains.

More than 50 Chinese travel and tech companies have rolled out ticket snatching software in recent years, acquiring rival apps to help ensure a piece of the growing market for digital ticket booking services.

Fireworks for the Chinese New Year over the Hudson River #NYC #yearoftherooster ??? pic.twitter.com/vvdWXOJ4JK

Ctrip, China’s biggest online travel company, has acquired a number of rival companies with ticket-selling apps, which combined make the company the largest provider of the mobile app software.

Most apps, including those by Ctrip, only charge users if they successfully secure tickets, although critics say bundled insurance and other add-ons create price competition regardless of the policy.

Ctrip declined to be interviewed for this article.

“We have never charged any kind of fee from our users in any way,” said Wang Yinhua, chief ticket snatching engineer at 360 Browser, a popular web browser developed by Qihoo 360.

He added: “Before the age of online ticket purchases, people had no choice but to queue up through the night at railway stations and ticket windows.”

Yet the software bears some similarity to ticket touts, according to Zhao Zhanling, a legal adviser to the Internet Society of China, which is a non-governmental body backed by the Ministry of Industry and Information Technology.

How to survive #ChineseNewYear: pic.twitter.com/oWCadr5px4

One traveller wrote on the Twitter-like Sina Weibo messaging service: “I didn’t see the difference between snatching apps and scalpers.”

Touting is illegal in China, and companies cannot charge more than 5 yuan on top of a train ticket’s set price as a service charge. But snatching software is seen as entrusting a third party to buy the ticket on your behalf, so it does not break the rules.