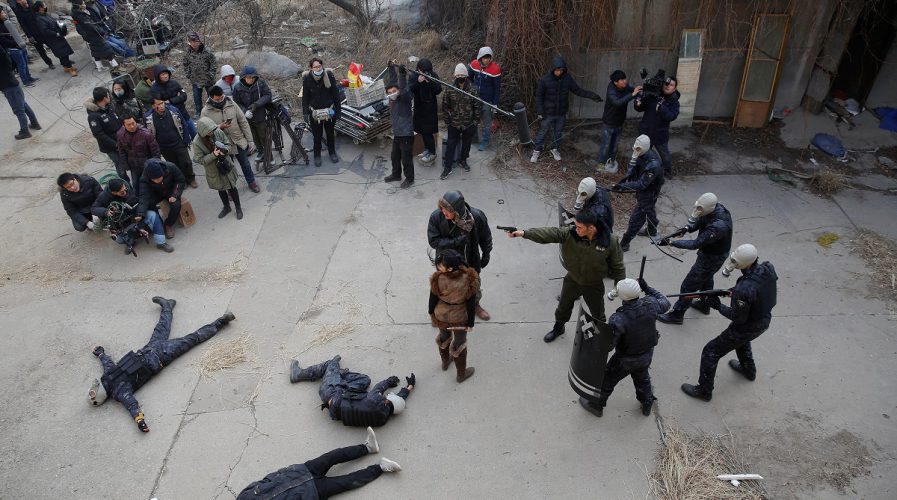 Crew and actors film a scene of the post-apocalyptic movie Zombie Era at an abandoned factory complex in Langfang, Hebei province. Pic: Reuters

THE heroine races across the factory floor to plunge a knife into the chest of a zombie assailant.

“Excellent!” yells director Shen Chenyan, and another scene is in the can for the post-apocalyptic thriller “Zombie Era”, the latest domestically-produced movie destined for a growing online audience in China.

Demand for video streaming of movies and TV shows has opened the door to a new generation of directors like 27-year-old Shen.

The former cinematographer, who oversees 100 cast members and crew on the Zombie Era set in an abandoned factory near the capital Beijing, said he would have waited years for the chance to direct a traditional cinema release.

“The quality and quantity of online movies are going up, so it’s a great opportunity to try out a few of my own thoughts and to fulfill my intention of becoming a film director.”

Although China is the world’s second largest movie market, the outlook for cinema operators is cloudy after its box-office ended 2016 with its smallest growth in a decade, up just 3.7 percent on the year, at 45.7 billion yuan (US$6.6 billion).

A slowing economy and fewer foreign blockbusters were among the factors blamed for softer ticket sales last year, compared to a jump of nearly 50 percent in 2015.

“I watch more movies online,” said Wen, a 32-year-old nurse in Beijing, who said he rarely goes to a cinema these days.

“You can save more money watching movies online and my work takes up too much of my time.”

For years online movie makers have largely flown under the radar in China’s tightly-regulated film industry.

“When online movies first got started you could do whatever you wanted,” said Liu Yongqi, producer of ’30 Days to Cultivate Love’, a comedy about a man who believes he has terminal testicular cancer and wants a child before he dies.

Film makers will be required to submit scripts for approval and get a license to distribute, screen or transmit through the internet and telecoms or radio and television networks.

More oversight to weed out excessively lurid or gory content may not be such a bad thing, however, say some in the industry.

“People who produce the best work are still able to make do with what we have,” said Liu Zhaohui, co-founder of Beijing Qishouyouyu Culture Media, which backed 100 online films in 2016. “That is to say, they can dance with handcuffs on.” – Reuters