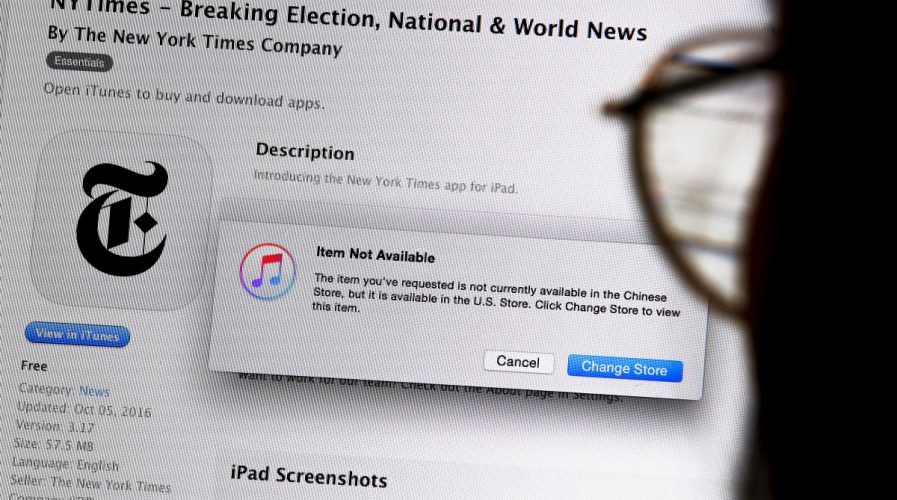 An illustration shows a person looking at a computer screen in Beijing showing an Apple iTunes store message saying that the New York Times app is not available in the Chinese store. Pic: Reuters

AN influential Chinese state-run tabloid has chided the New York Times over its reporting practices after Apple Inc removed the newspaper’s app from its China app store at the request of the Chinese government.

The Global Times editorial, released on Friday, said the New York Times had in the past four years been “trying to wield influence in China’s internal affairs” by doing investigative stories on sensitive subjects. It did not give specific examples.

“China is sincere in opening itself up but the prerequisite is to ensure its political security,” said the editoral in the Global Times, an influential tabloid published by the ruling Communist Party’s official People’s Daily. “The Western media should not question China if it is to close its doors by scrutinizing one particular issue.”

The Global Times said Apple “cares most about business, so it is willing to respect Chinese laws”, adding that Apple faced tough competition from local brands in Greater China.

The New York Times pointed to a recent investigative report on government subsidies offered to Apple supplier Foxconn, also known as Hon Hai Precison Industry Co, as a possible reason for the ban.

In an report on the app’s removal, the New York Times cited their own spokeswoman as saying the app was removed shortly after a journalist made requests to government authorities, Foxconn and Apple seeking comment for the story.

The New York Times called on Apple to reconsider the ban, and said the block was part of a wider attempt to prevent readers from accessing the U.S. publication.

The newspaper is one of many foreign publications that is blocked within the country by China’s cyberauthority. But the apps from other blocked news sites, including the Wall Street Journal and the Financial Times, remain available on the China app store as of Friday.

The internet regulator has yet to respond to Reuters’ queries on the matter.

“The development of the internet in China must respect China’s laws and regulations, in principle,” foreign ministry spokesman Geng Shuang said on Thursday in response to a question about the apps. – Reuters