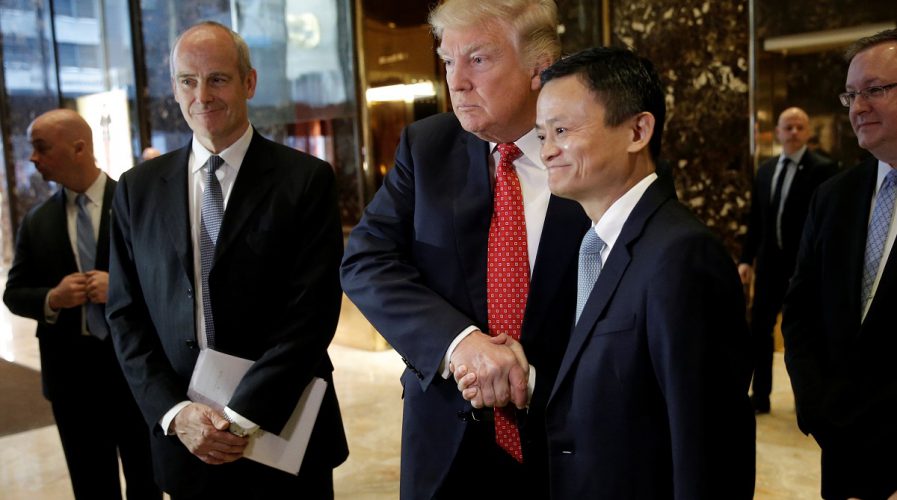 IN what has been chalked up as another ‘win’ for U.S. President-elect Donald Trump, Alibaba’s Jack Ma met with the incumbent president on Monday to discuss plans to generate a million jobs in the U.S. through his e-commerce platform.

Ma, who is Asia’s richest man, met with Trump at the Trump Tower. Alibaba Group announced the meeting on Twitter, saying the plan was to help “small [businesses] sell to China”.

Brion Tingler, head of external affairs at Alibaba, was quoted in a statement to CNNMoney: “Jack plans to share how Alibaba will create 1 million U.S. jobs by enabling 1 million small businesses to sell American goods to China and Asian consumers on the Alibaba platform.”

After the meeting, Trump told press members gathered at the Trump Tower that Ma is a “great, great entrepreneur, and one of the best in the world”, and that the meeting was “great”.

“It’s jobs. You just saw what happened with Fiat where they’re going to build a massive plant… in Michigan,” he was quoted saying. “And we’re very happy. And Jack and I are going to do some great things.”

Ma told Reuters: “We mainly talked about small business and young people and American agriculture products to China. And we also think, that the China and U.S. relationship should be strengthened, should be more friendly.”

Ma’s friendly approach to Trump’s administration appears to be at odds with how the president-elect has been dealing with China relations recently. He has repeatedly criticized trade policies between the two countries, drawing ire and threats from China to suspend trade if Trump attempts to put sanctions in place.

China has also bristled at Trump’s apparent lack of respect for the one-China policy, following a phone call by Taiwan’s president Tsai Ing-wen congratulating Trump on his ascent to the White House.

State-run tabloid Global Times warned of “revenge” if Trump reneges on the one-China policy. “There is no room for bargaining,” said the newspaper.

Despite the diplomatic tension, Alibaba’s Ma appears optimistic about relations with Trump’s administration from a business perspective. He said in an interview with CNNMoney last year that Trump would “never neglect the relationship between China and America”.

Job creation was one of Trump’s main campaign promises. In December, the head of Japan’s SoftBank pledged to invest US$50 billion in U.S. businesses and to generate 50,000 new jobs in the U.S.

Masayoshi Son is placing his confidence in “deregulation” under a Trump administration. Trump claimed that the deal would have never happened if it weren’t for his win.