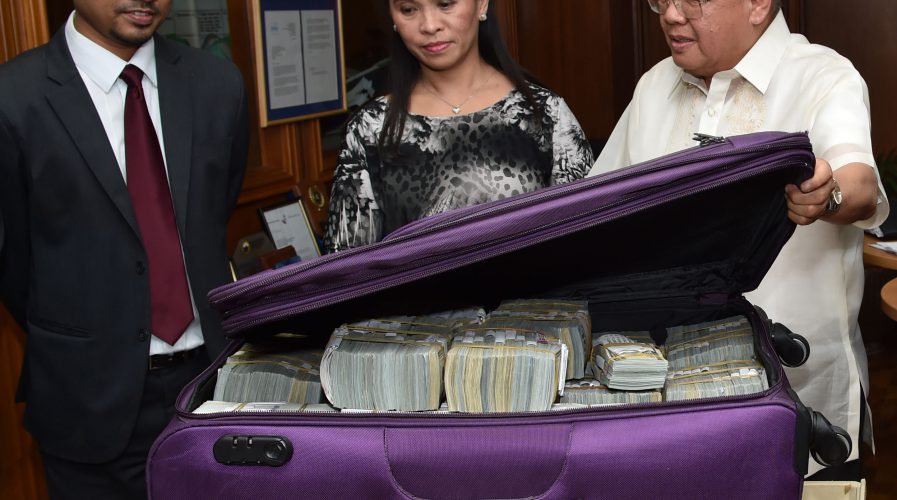 Officials opening a bag of US dollars that formed a small portion of the funds stolen from Bangladesh’s central bank by hackers and laundered in Manila’s casinos. Source: AP

THE heist of US$81 million from the Bangladesh central bank’s account at the New York Federal Reserve last year was “state-sponsored,” an FBI officer in the Philippines, who has been involved in the investigations, said on Wednesday.

Lamont Siller, the legal attache at the US embassy, did not elaborate, but his comments in a speech in Manila are a strong signal authorities in the United States are close to naming who carried out one of the world’s biggest cyber heists.

“We all know the Bangladesh Bank heist, this is just one example of a state-sponsored attack on the banking sector,” Siller told a cybersecurity forum.

An official briefed on the probe told Reuters in Washington last week the FBI believes North Korea was responsible for the heist. The official did not give details.

The Wall Street Journal reported US prosecutors were building potential cases that would accuse North Korea of directing the heist, and would charge alleged Chinese middlemen.

The FBI has been leading an international investigation into the February 2016 heist, in which hackers breached Bangladesh Bank’s systems and used the SWIFT messaging network to order the transfer of nearly US$1 billion from its account at the New York Federal Reserve.

The US central bank rejected most of the requests, but filled some of them, resulting in US$81 million being transferred to bank accounts in the Philippines. The money was quickly withdrawn and later disappeared in the country’s huge casino industry.

There have been no arrests in the case.

A Chinese casino owner in the Philippines told Senate inquiry he took millions of dollars from two Chinese high-rollers in February. He said the two men were responsible for transferring the stolen money from Dhaka to Manila.

Philippine investigators have filed criminal charges against several people and a remittance company for money laundering in connection with the heist at the country’s Department of Justice (DOJ).

None of these cases have yet been filed in court, however.

Siller said the FBI was working closely with the Philippines government “to ensure those responsible for the attack do not go unpunished.”

“So for us in the FBI, it is never over. We are going to bring these people to justice so we can show others, that you maybe be able to muster such attacks, even state-sponsored, but you will not get away with it in the end.” – Reuters