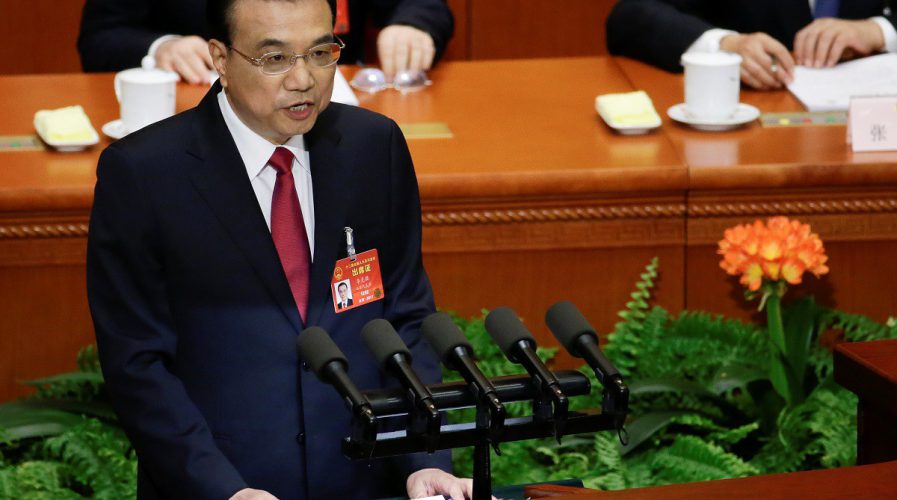 China’s Premier Li Keqiang delivers a government work report during the opening session of the National People’s Congress (NPC) at the Great Hall of the People in Beijing. Pic: Reuters

CHINA stocks rose on Monday morning as investors piled into technology shares after Premier Li Keqiang identified innovation as a key part of the economy’s restructuring at the annual opening of the country’s parliament.

Bullish sentiment spilled over into Hong Kong, where stocks were firm despite expectations of an increase in U.S. interest rates late next week and rising geopolitical tensions in Asia Pacific.

China’s blue-chip CIS300 index rose 0.5 percent, to 3,443.48 points at the end of the morning session, while the Shanghai Composite Index gained 0.4 percent, to 3,230.10 points. A flood of news from the opening of the National People’s Congress (NPC) meeting over the weekend was interpreted by investors as positive.

More foreign talent is welcome to #China for innovation work and business, and the govt will step up support: Li https://t.co/OtyXt93Nfl pic.twitter.com/7LqQ67TpNc

China has cut its growth target in 2017 to around 6.5 percent, from a range of 6.5-7 percent last year, as Beijing pushes through painful reforms to address a rapid build-up in debt, and erects a “firewall” against financial risks.

Investors, who had already anticipated lower growth targets, chose to focus on Beijing’s commitment to proactive fiscal policy, the priority on innovation, and plans to further cut excessive capacity in sectors such as coal and steel.

“Slower growth has already been priced in by the market. But the government’s emphasis on innovation is sending a positive message,” said Wu Kan, head of equity trading at investment firm Shanshan Finance.

He added that investors also cheered Beijing’s apparent shift toward promoting healthy equity market to finance the corporate sector, in a move away from the troubled debt market.

SEE ALSO: Renewed interest in Tesla as sales in China triple to over $1bn

Stocks related to Artificial Intelligence (AI) soared after the sector was identified by Li as key to upgrading the economy.

Coal stocks were also among the biggest gainers, as China vowed new cuts in steel and coal capacity.

The tech sector gained 1.2 percent in the city, apparently getting a boost from China’s NPC meeting.

Investors seem to have shrugged off a possible Federal Reserve rate hike this month, and rising geopolitical tensions in East Asia, as North Korea fired four ballistic missiles early in the day, while a spat between China and South Korea over missile defense deepened. – Reuters