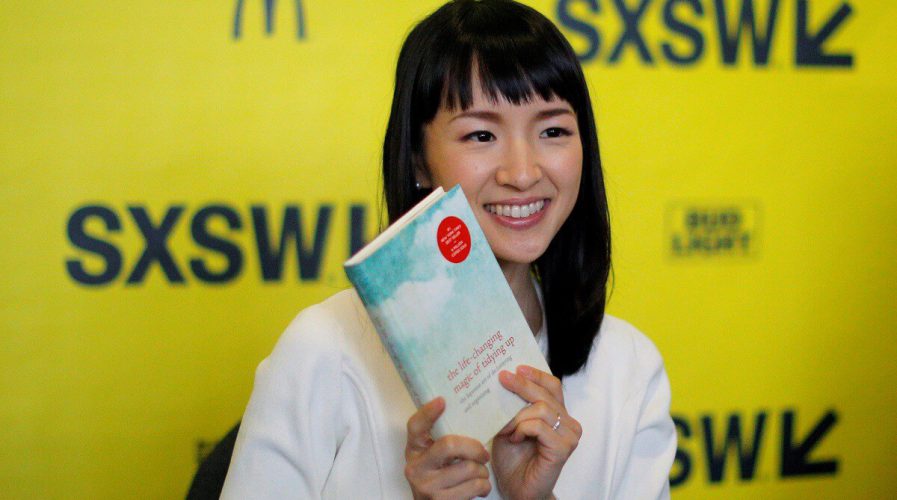 Japanese author and creator of the KonMari Method to declutter, Marie Kondo, poses with one of books for a fan’s photograph during a book signing at the South by Southwest (SXSW) Music Film Interactive Festival 2017 in Austin, Texas. Pic: Reuters

INTERNATIONALLY  acclaimed organizing guru Marie Kondo has a new tool in her global battle against messy rooms – an app.

“My goal is to have as many people as possible who can get the job done in tidying up,” she said in an interview after speaking at the South by Southwest technology conference in Austin, Texas over the weekend.

“To achieve that, I’m implementing various measures, one of which is the app to support decluttering,” said the woman whose name has been turned into a verb by her followers who say they have “Kondoed” their closets when they decluttered.

Kondo is known to global audiences for her best-selling books, including The Life-Changing Magic of Tidying Up: The Japanese Art of Decluttering and Organizing, which has been translated from Japanese into more than 40 languages, with more than seven million copies sold worldwide.

The app called “KonMari,” launched a few months ago, gives out organizing tips, allows people to share before and after pictures, and provides a platform for her followers to socialize.

The followers of the woman who earned a spot on Time magazine’s 100 Most Influential People list in 2015 call themselves “Konverts.”

But her critics see her as an irritating presence with a cult-like following, harping on the glaringly obvious need to be better organized.

Started cleaning my closet on my Marie Kondo. Wish I could say it was about finding joy, but it's really so I can buy cute, new stuff ?

Kondo has made an art of folding clothes into optimal shapes for storage and her KonMari disciples see her words as a philosophy about seeking a happier life by putting their homes in order.

Kondo spends 80 percent of her time outside of Japan, but with the help of technology, she wants to knock on the doors of more homes around the world.

“Tidying up is a broad theme relevant to anyone in any country,” said Kondo, who has a knack for decluttering her quotes. – Reuters