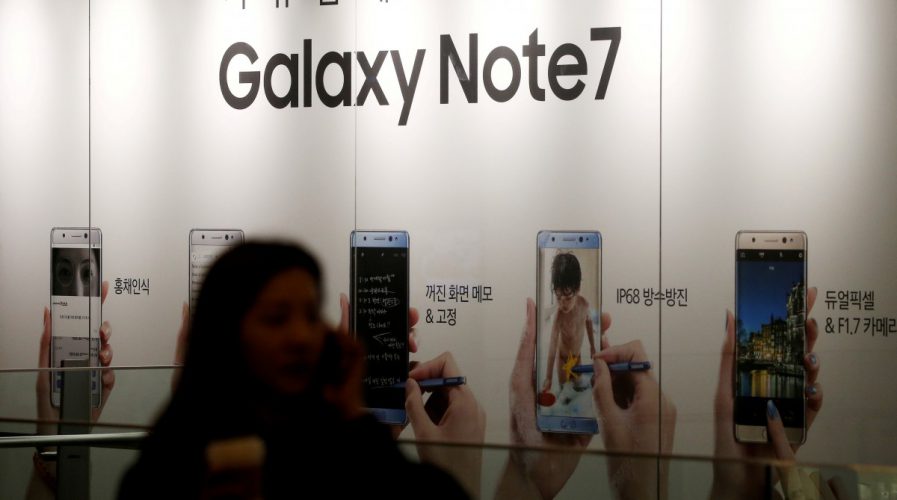 SAMSUNG dropped a bombshell last night when it announced refurbished versions of their Galaxy Note 7 model – notorious for its exploding batteries – could soon hit stores.

The model courted disaster back in October when the South Korean hardware manufacturer issued a total recall of the devices after reports emerged the phones were spontaneously combusting in the hands of consumers. The 3.06 million units of the US$900 phones had been in public circulation for only two months before the recall.

Samsung confirms the Galaxy Note 7 is making a comeback – sort of https://t.co/TCRfTNmyck pic.twitter.com/KYmz0nW5uN

Investigations place the cause of the exploding phones squarely at the feet of the phones’ batteries, which were manufactured by two companies: Samsung SDI Co Ltd and Amperex Technology.

The recall was estimated to have cost Samsung US$5.5 billion over the course of three quarters, while seven percent of the company’s share price went up in flames.

Other devices were cleared of potential ignition, but it was Samsung’s reputation that had taken a hit, compounded by current criminal investigations of the Lee chaebol behind the technology titan. It is uncertain if the Note 7 can go beyond the explosive scandal – Samsung could potentially recoup some of its losses from sales of the refurbished handset, but concerns might still linger in consumers.

It is uncertain if the Note 7 can go beyond the explosive scandal – Samsung could potentially recoup some of its losses from sales of the refurbished handset, but concerns might still linger in consumers.

After the huge recall, Samsung came under fire from environmental lobby group Greenpeace regarding the disposal of the mobile phones. This announcement is a rousing victory for the rights group, who launched a campaign to push the company to find an eco-friendly solution to dispose of the phones.

Late Monday evening, Greenpeace campaigner Jude Lee said in a statement: “People around the world signed petitions, emailed Samsung CEO, demonstrated in cities around the world, and finally Samsung has listened. This is major win for everyone that took action, and a step towards shifting the way we produce and dispose of electronics.”

It is not entirely certain if Samsung will refurbish all the Note 7s, but sources have noted the company may also consider reusing certain parts of the phones in other devices. Components from non-refurbished devices – such as chips, camera modules, as well as the rare metals inside it such as copper, gold, nickel and silver – could very well find their way into other future Samsung devices.

#Samsung finally reveales its plans for all the #GalaxyNote7 pulled from the market https://t.co/T7OufQHKo5 pic.twitter.com/GVPmkmRNbG

“Regarding the Galaxy Note 7 devices as refurbished phones or rental phones, applicability is dependent upon consultations with regulatory authorities and carriers as well as due consideration of local demand,” Samsung said in a statement, adding the firm will pick the markets and release dates for the refurbished Note 7s.

Samsung’s announcement comes just before of the imminent release of the company’s latest flagship handset, the Galaxy S8. The release of the hotly-anticipated phone had been delayed, with some sources – as reported by Reuters – saying the company wanted to “to enhance product safety following an investigation into the cause of fires in its premium Note 7 devices”.

Evidently, the ghost of the Note 7 will continue to haunt Samsung in time to come. The Galaxy S8 is set to be released in New York on March 28.