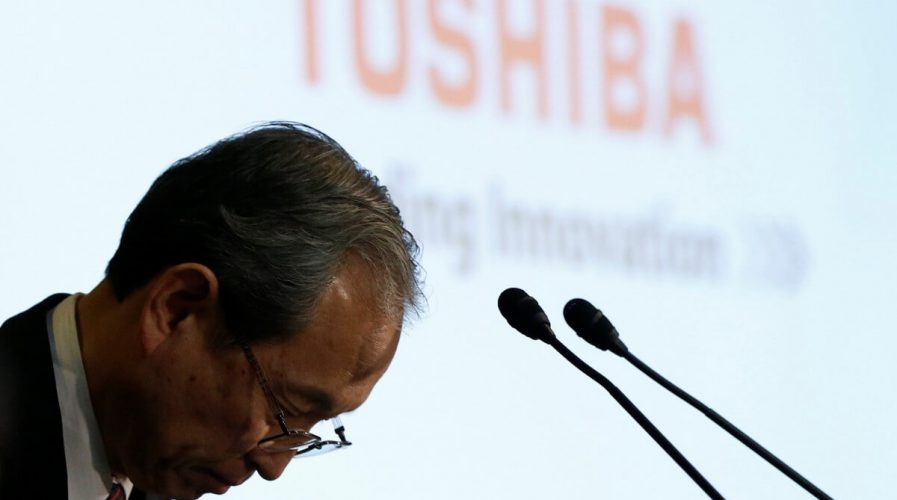 Toshiba Corp CEO Satoshi Tsunakawa bows at the start of a news conference at the company’s headquarters in Tokyo, Japan. Pic: Reuters.

JAPANESE conglomerate, Toshiba, just cannot seem to catch a break, as yet another stumbling block trips them up. The latest development in ongoing saga is that the Japanese government has confirmed that it has no intention of bailing the company out from its troubles.

In fact, the government is currently mulling steps to assist US investigations into the company’s dealings with embattled Westinghouse division. Last Thursday, an information-sharing deal was struck between Trade Minister, Hiroshige Seko, and the US Commerce Secretary, Wilbur Ross. According to Japan’s Kyodo News, Seko said the US Cabinet members had said they considered the fiscal stability of Toshiba extremely important.

Once the darling of Japan’s business scene, Toshiba has experienced a tumble from grace beginning with revelations of discrepancies in the company’s accounts back in 2015. This has been followed by the slow but steady crippling of Toshiba. The final nail in the coffin appears to be the Japanese government’s decision to leave them to their fate.

The announcement that the company was on the verge of plunging JPY150 billion (US$1.3 billion) into the red was met with panic by shareholders and former employees, and made worse by the news that the excessive debt could cause the company to face demotion to the second section of the Tokyo Stock Exchange – and possibly a delisting from the market all together.

But how exactly did things get so bad for one of Japan’s economic powerhouses?

In September 2015, the business world was rocked by revelations that Toshiba had been doctoring their accounts for years, padding the books out by US$2 billion over the last seven years. As result, former CEO Hisao Tanaka, resigned and Toshiba found itself mired in debt and two years of unceasing scrutiny.

This week, fresh scandals emerged when a securities watchdog announced that they had found new evidence linking former top management officials at Toshiba with manipulating the company’s personal computing accounts. The Securities and Exchange Surveillance Commission alleged that Toshiba may be criminally liable for falsely overstating the company’s finances by JPY 40 billion over a three year period. 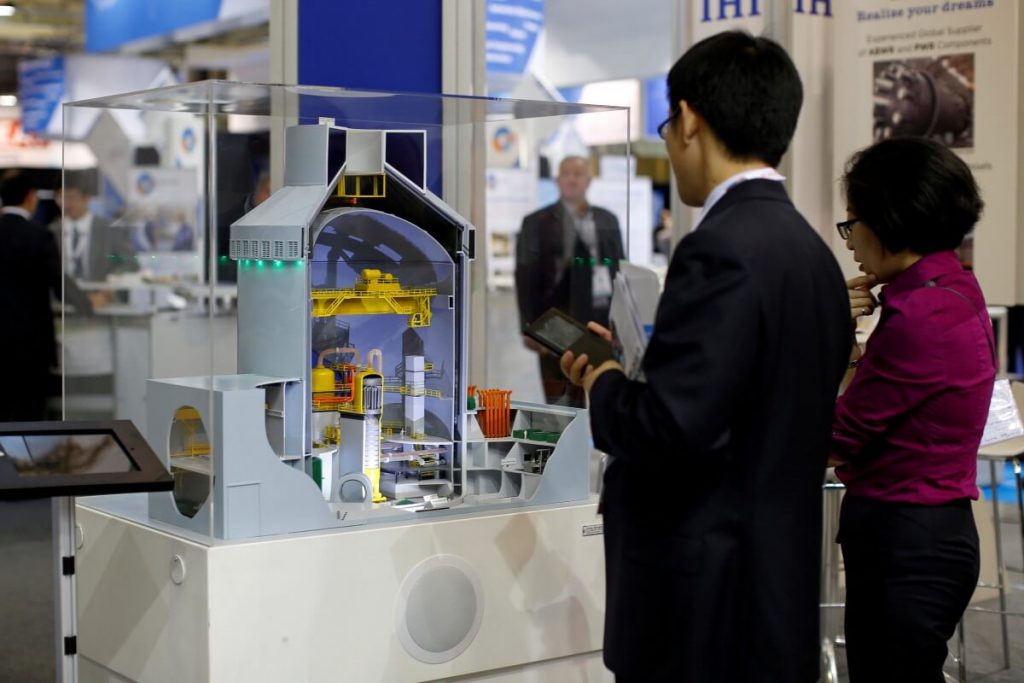 Yet Toshiba’s problems go beyond the accounting scandal—the company’s share price was dealt a body blow when the group announced that the company’s nuclear division under the acquired Westinghouse would be facing huge impairment losses, causing a US$2.3 billion write-down of its value. In late December, Toshiba’s share price plummeted 37 percent, and it’s been reported that the Pittsburgh-based business is looking to file a Chapter 11 bankruptcy claim with the US.

“We don’t know yet how far the impairment losses will expand and the nuclear business is clearly no longer as profitable as in the past,” an analyst said to The Financial Times. “The uncertainty still hanging is what kind of survival strategy Toshiba has.”

The company’s recurring failure to post its earnings report last week prompted further chaos for its stock price. Later, the company announced that it was weighing the option to sell a majority stake in Westinghouse, leading to a further decline in investor confidence.

“To me, Toshiba seemed like an unmistakable choice,” investor Ichio Hosoda told The Japan Times in a recent interview. “I thought Toshiba was a very trustworthy company.”

Toshiba acquired Westinghouse in 2006 in a bid to enter the nuclear energy business. The US$5.4 billion acquisition threw the company’s finances into the red and shortly after the financial crisis of 2008 hit the globe. The nuclear energy business has not made any profit since 2013, and nuclear businesses worldwide reeled from the effects of the 2011 Fukushima catastrophe.

Since then, rumours of a possible third-party share allotment with a Middle Eastern state-fund have circulated, but the markets have already passed judgement: Toshiba stock is now only worth half of its original price from a year ago.

Can memory chips save Toshiba?

In an effort to stay alive, Toshiba has rushed to put its memory chip business up for sale – the business has been a regular performer for the company though even those margins have slipped in recent years due to declining Chinese demand. Toshiba is the world’s second biggest NAND flash memory producer after Samsung Electronics Co. and is estimated to be worth US$13 billion. 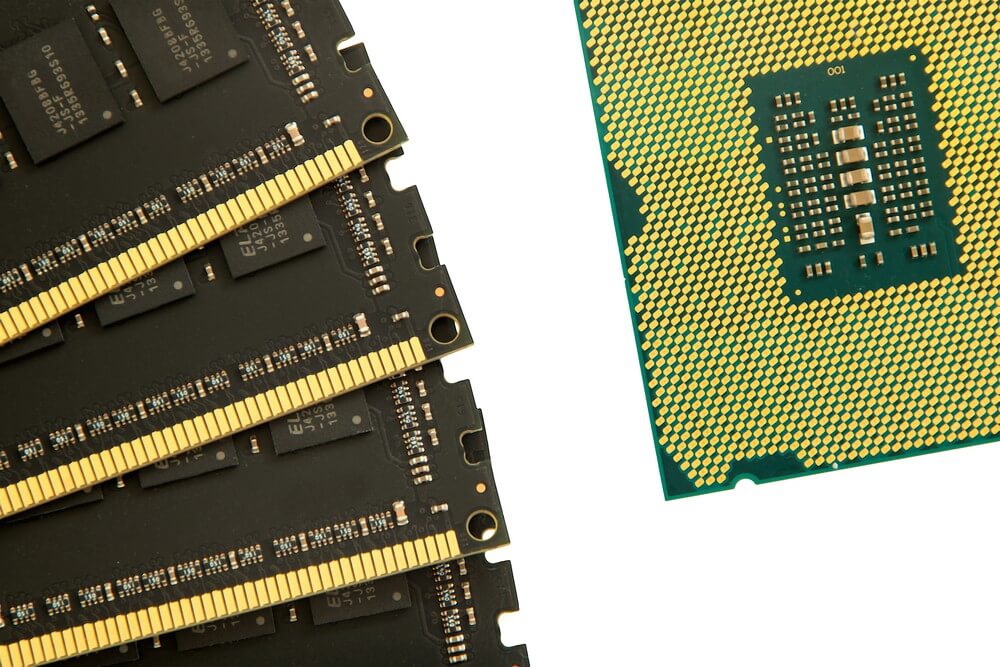 Toshiba is banking on the sale of its memory chip business to ensure its survival. Source: ThirdUnit/Shutterstock

Ten buyers have been rumored to be considering a purchase, including Western Digital Corp., Micron Technology Inc., Kingston Technology Co. and SK Hynix Inc. Foxconn founder, Terry Gou, is noted to have said Foxconn is “very serious” about acquiring the memory chip unit.

Bids are expected to range from JPY700 billion to JPY1.8 trillion (US$6.2 billion to US$15.9 billion) and Toshiba has expressed its willingness to sell off the entire business for JPY1.5 trillion.

Despite the government’s declining to get save Toshiba, officials have noted that the microchip deal would be closely monitored. Some sources have said that a state-backed fund might buy in as a minority shareholder should the deal produce any national security risks.

However, it’s unclear as to the long-term effects of the sale of the memory chip unit. Toshiba sold off its white goods and medical units businesses in the previous year. Coupled with the memory chip business, these three drove Toshiba’s profits and corporate identity – getting rid of the units as well as Westinghouse might severely impact the company’s ability to rebuild.