An increasingly bitter and public feud is brewing between the husband-and-wife team behind ShopClues. Source: Shutterstock

Scandal snaps at the heels of Indian e-commerce unicorn ShopClues

THE unicorn boom which followed the emergence of Facebook, Uber and Airbnb as leaders of an exclusive club of startups valued at US$1 billion, has slowed down since the heady early days.

Early last year, Market Watch declared “the unicorn era for tech startups” has come and gone – 2016 saw only 25 startups crowned, with rates down by 68 percent.

Though the overall unicorn trend is led by the US and China, with India coming up third.

India boasts 11 private unicorns, each one individually revered in the country – for example, Flipkart and Snapdeal are household names with user bases that rival Amazon. Though most of the unicorns in India are involved in the e-commerce space, a couple of B2B firms have made it into the club.

One example of India’s unicorn success is ShopClues, a homegrown e-commerce unicorn based in Gurgaon which  provides an online marketplace for consumers in Tier 2 and Tier 3 cities.

The company is currently valued at US$1.1 billion. In late 2016, the company’s Series E funding round pushed it into unicorn territory. The latest round of funding was led by a Singapore-based company, and previous investors such as Helion Venture Partners and Nexus Venture Partners also participated.

It’s a success story which speaks to India’s growing prominence in the tech world, expanding out from its role as a provider of outsourced IT services to a space for tech entrepreneur growth.

However, ShopClues is on everyone’s lips now for an entirely different and far more unpalatable reason. An increasingly bitter and public feud is brewing between the husband-and-wife team behind the online marketplace.

It all started when Sandeep Aggarwal, the estranged husband of co-founder Radhika Aggarwal and ShopClues’s chief business officer, lobbed a series of Facebook posts accusing Radhika of unscrupulous actions.

He alleged his wife and Sanjay Sethi, ShopClues’s other founder and CEO, had conspired to oust him and strip his voting rights without his prior knowledge. 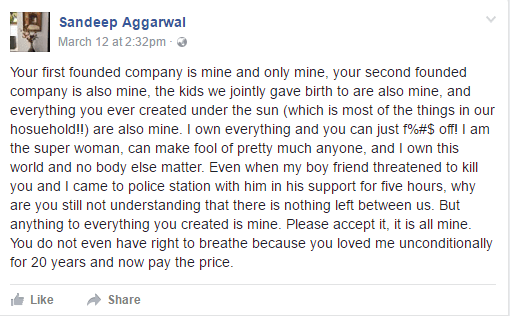 In a video interview with Inc42, Sandeep claimed he conceived of ShopClues in October 2010 and funded its birth with his own savings for the first nine months prior to receiving external funding.

According to sources, the couple had been separated for six months and Radhika has filed for divorce.

This isn’t the first time Sandeep has run into trouble – as an equity research analyst for a San Francisco-based financial services firm, he fed insider information on clients Microsoft and Yahoo to hedge fund manager, Richard Lee.

In July 2013, Sandeep was arrested by the FBI and later pleaded guilty. He returned to India a year later, to find his wife increasingly distant and his standing within the company changed.

When questioned about the incident, Radhika issued a statement to the Economic Times India, noting her husband’s social media actions were troubling: “I am shocked and devastated to see the levels to which Sandeep will stoop in our personal separation battle with little consideration for our children and family.”

According to Business Today, Sandeep said he had filed a criminal defamation case against Radhika and Sethi for allegedly downplaying his role in ShopClues’ creation.

A statement issued by his press team said he regretted having an “emotional outburst” on social media, but still “stands by each and every word”.

It continued: “[Sandeep] lost the love of his life, ShopClues, and hardly gets to see his kids and that took a toll on his emotions.”

ShopClues has so far denied any knowledge about the defamation case filed against them, reported Business Today, and re-stated Sandeep’s run-in with the FBI, adding he “has been separated from the company since 2013”.

Sandeep left ShopClues and has gone on to found Droom, an online marketplace for automobiles.

Droom has since undergone its Series B funding round, with BEENEXT, Digital Garage of Japan, Lightbox Ventures and Beenos as just a few of their investors.

He has also since filed an Economic Offense Wing complaint with Gurgaon officials and an adultery case against Sanjay Sethi.

He and Radhika are currently battling for custody of their children.