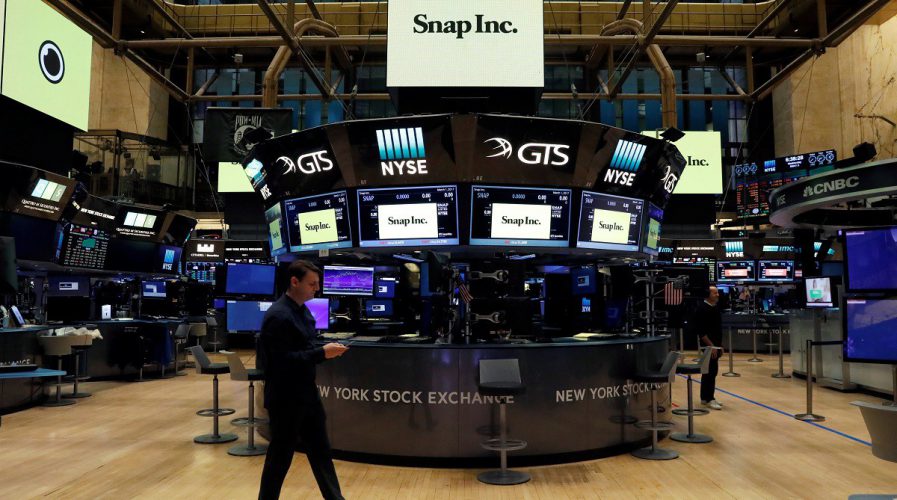 Snap Inc. logos are seen on the floor of the New York Stock Exchange (NYSE) on the eve of the company’s IPO in New York. Pic: Reuters

Snap advertisers worry about measurement even as they ‘lean in’

AS Snap Inc. looks to gobble up a larger share of the US$82 billion digital U.S. ad market, the owner of the ephemeral messaging app popular with millennials could find itself facing more demands from advertisers for reliable metrics.

Snap, like many in the industry, does not have its ad metrics audited by a third party, a step that could help woo media buyers and advertisers and in turn boost revenue for the Snapchat owner, which is aiming to raise more than US$3 billion in its initial public offering on Thursday.

“Shifting any significant amount of funds or dollars into Snapchat, until we can start to prove out the measurement, is always going to be a challenge.”

Snap declined to comment when asked if it had plans for an external audit.

At the high end of its expected IPO price range, Snap will have a market value of more than US$22 billion even though it lost more than US$514 million last year on $404 million in revenue.

Snap’s business model depends on drastically increasing ad dollars per user. That number sits at US$2.15 for North America, where more than half of its users are based, according to Snap’s S-1 filing. Facebook’s average revenue per user in the U.S. and Canada is US$19.81, according to the company’s most recent earnings report.

Snap’s popular mobile video ads start at US$10,000 per month, while ads on the Discover feature, reserved for big publishers and brands, start at US$50,000 per day. Snap also lets brands buy a 24-hour sponsored lens or geofilters that can cost more than US$700,000 for holidays and special events, according to digital marketing firm Wallaroo Media.

While major advertisers have been eager to experiment with Snap, the measurement issues loom large in persuading advertisers to make big, long-term commitments. The digital ad industry has struggled for years with how to measure whether an ad has actually been seen, and what counts as a “view” when many users linger on a video for only a few seconds.

Facebook Inc. last year admitted to several errors in the way that it counts its advertising audience. In February, the company agreed to an independent audit by the Media Ratings Council, a step long advocated by groups including the Association of National Advertisers.

Alphabet’s Google, the market leader in online video advertising, also agreed last month to have more of its metrics audited by the MRC, including those for YouTube for the first time.

Snap has been introducing its own metrics that highlight engagement, arguing that its users, mostly in the 18-34-year-old demographic coveted by advertisers, spend an average of 25 to 30 minutes on the app and visit it more than 18 times a day.

Snap Chief Strategy Officer Imran Khan told potential investors in New York last week that they should focus less on user growth, a typical way of reading the potential of a social network, and more on how active users are on its app.

In November, the company began using a newly launched metric by digital analytics firm Moat, called Moat Video Score, which assigns video ads a number between zero and 100 that rates the ad’s performance based on how long it is viewed, how long the sound was on and how much space on the screen the ad occupied.

Snap stated in its S-1 filing that “there weren’t any standard metrics” in the industry.

“We see Snapchat as an opportunity, we think that most of our major advertisers are certainly leaning in somewhat to Snapchat,” said Rob Norman, chief digital officer of ad agency GroupM, the world’s largest media-buying firm. But he added that Snap had to show numbers to prove the effectiveness of its advertising.

Google and Facebook control about 60 percent of the U.S. digital ad market and their growth has accelerated in recent years, according to data by eMarketer and Interactive Advertising Bureau.

Advertisers, at a minimum, welcome that Snap will inject more competition into the market.

“You need that competition to put the onus back on the person selling you a bill of goods,” said Ian Schafer, founder and chairman of digital ad agency Deep Focus.

In January, an ex-Snap employee filed a lawsuit accusing the company of sharing inflated metrics with some investors ahead of its IPO.

Snap dismissed the allegations as “false from top to bottom” and asked Los Angeles County Superior Court to put the case on hold until a private arbitration proceeding is completed. A hearing on the motion is scheduled for April 17. – Reuters