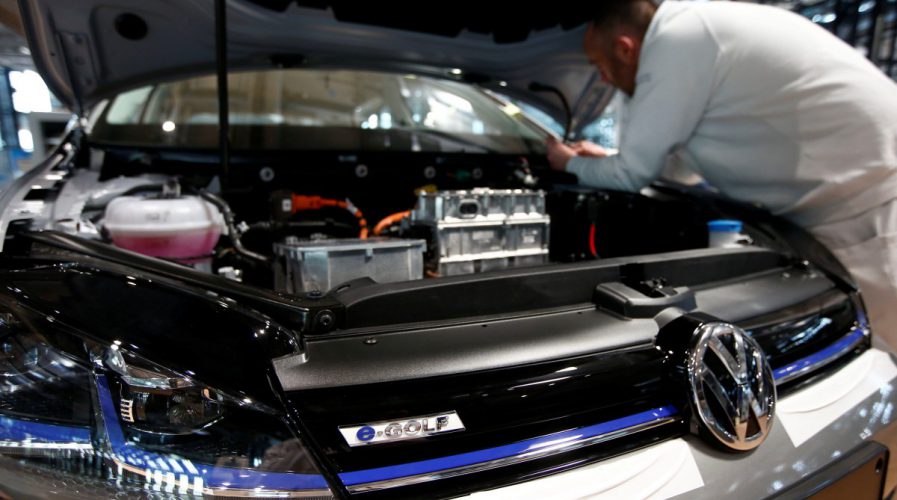 A worker assembles an e-Golf electric car at the new production line of the Volkswagen’s Transparent Factory in Dresden, Germany, on March 30, 2017. Source: Reuters/Fabrizio Bensch

There’s also been a significant amount of job-hopping. Top execs are being poached as the race for AI development heats up.

Even auto companies are getting in the game, as TechCrunch recently reported Volkswagen is “doubling down” on both China and AI by investing US$180 million into Chinese AI startup Mobvoi. The company develops voice recognition and natural language processing technologies, which Volkswagen is looking to incorporate into its cars.

The deal is more a partnership than traditional capital raise, as the US$180 million will be going into a joint-venture that will “develop and apply AI technologies to [the] automotive industry,” according to a statement released by Volkswagen. The two companies will have 50-50 ownership of the venture.

#AI #startup Mobvoi's technologies to be promoted by #VW #China in #automobile market
Founded in 2013 by ex-Googlerhttps://t.co/VkClgvcEZy

Mobvoi’s founder is former Googler Zhifei Li and the startup received an undisclosed Series C round back in 2015 from Google. Besides raising over US$2 million on Kickstarter for its Ticwatch smartwatch, Mobvoi has also developed a Chinese voice assistant called Chumenwenwen.

The company is no stranger to the auto industry, as it developed a WeChat-integrated smart rearview mirror last year – which was likely the product to pique Volkswagen’s interest.

Volkswagen isn’t the only auto company getting into the AI game. Last year, General Motors acquired a San Francisco-based startup called Cruise Automation, which develops autonomous vehicle technology. Sources suggested the deal went through for over US$1 billion.

Most recently, Toyota has also invested in AI R&D, although in a less obvious way. Via the Toyota Research Institute, the company is using machine learning to reduce research time for “advanced battery materials and fuel cell catalysts”, which will be used towards zero-emission and carbon-neutral vehicles.

From the looks of it, the future of the auto industry will be focused on sustainable and self-driving technology and this year will bring about a ton of new innovations.