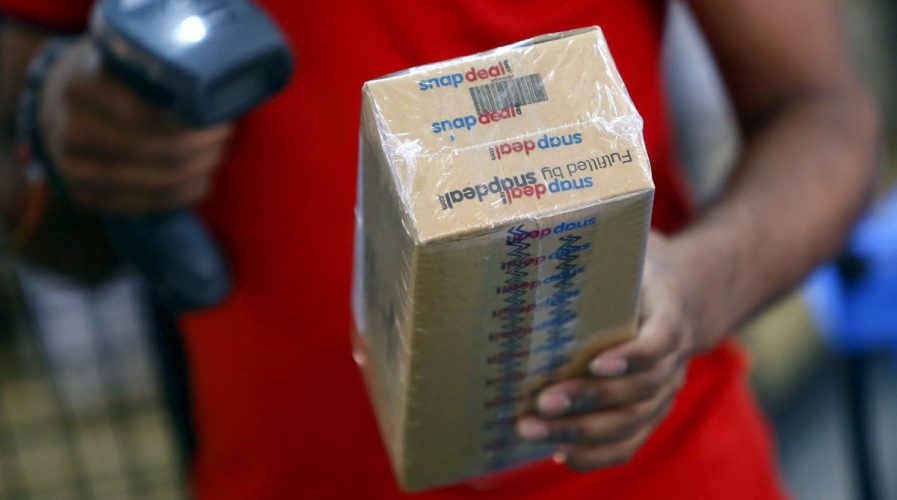 A Snapdeal worker scans the barcode on a packaged order at the company’s warehouse in New Delhi. Business Today writer Rajeev Dubey says the likely deal for Snapdeal could spell trouble for Flipkart. Source: Reuters/Anindito Mukherjee

SNAPDEAL’s days are evidently numbered with a sale of the company in the books. The company’s three biggest investors, SoftBank Group Corp., Kalaari Capital and Nexus Venture Partners, met in a conciliatory meeting to mend bridges that had burned when the three had argued over Snapdeal’s future financial moves.

Sources familiar with the goings-on of the shareholders’ meeting told The Hindustan Times SoftBank had expressed interest in buying Kalaari and Nexus’s stakes, which are valued at eight percent and 10 percent respectively. Kalaari and Nexus were early investors in Snapdeal and still enjoy strong shareholders’ rights in the company.

The source mentioned Kalaari and Nexus would each be looking for US$100 million for their stakes, with an additional US$100 million payout requested by founders, Kunal Bahl and Rohit Bansal.

The meeting between the three investors could pave the way to a sale of the company to rivals Flipkart or Paytm. SoftBank, which controls a 33 percent stake, seems to favor a sale to Flipkart whom it then plans to invest in, according to the same sources cited above.

#snapdeal founders have the gall to ask for a 100 mn usd payout for their flopshow. Are these the #startupindia role models? @nasscom

Snapdeal currently ranks third in the cutthroat Indian e-commerce industry, lagging behind industry leads Flipkart and Paytm. It was valued at US$6.5 billion in its latest funding round in February 2016, but odds are the actual sale price will be a fraction of that.

Employee worries have been floating around for a while now, and the founders are painfully aware of it. The pair had been traveling around to various townhall events closed to the public in recent weeks to deliver motivational speeches to audiences of their own employees, ensuring them their worries were unfounded and that Snapdeal would reap its profits soon.

“Cash is running out” at Snapdeal, said one of the sources, “But a compromise will be reached only if the deal makes financial sense for everyone.”

There’s been a jump in applications from Snapdeal employees looking for work elsewhere, according to headhunters at HR company Hunt Partners, and mass employee exoduses numbering around the region of 600 members in February.

Recently, the departure of Vani Kola, Kalaari’s representative on the Snapdeal board, suggested the takeover by SoftBank was already in the works, especially when it came out that Lydia Bly Jett had joined the board at the end of March from SoftBank. The changing of the guard was speculated to be the first of many future exchanging of hands on the e-commerce company.

Snapcart had previously looked to China for funding from various funds and present investor Alibaba Group Holding Ltd. to save itself from its drawn out decline, but so far, very few fish have been biting.

The cash crunch the company has been experiencing is a result of the heavy discounting practices it carries out in order to subsidise its e-commerce business and keep up with its rivals. Amazon’s deep pockets and increasing focus on the region has not helped, and there is only so much Snapdeal can do to protect its business.

It seems like a sale is imminent though, and the withdrawal of Chinese investors has thrown Snapdeal’s future plans into turmoil. The company was eyeing a positive profit margin in the next couple of years as well as a market listing, but that all seems like a bit of a pipe dream now.