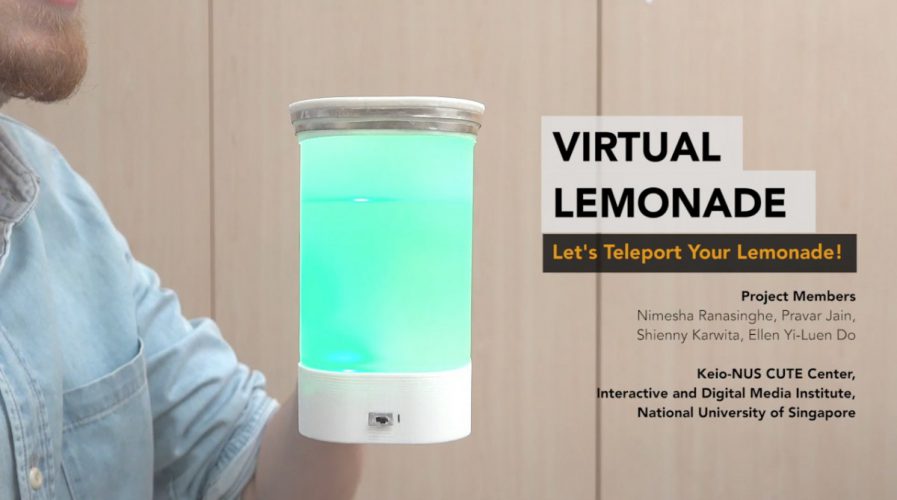 USING electrodes and LED lights, researchers in Singapore have created a “virtual lemonade” that could one day allow people to digitally share beverages over the Internet.

The team conducting the research at the NUS-Keio CUTE Center, a collaboration between the National University of Singapore and Japan’s Keio University, said they were primarily motivated by the fact that current digital interactions did not support sharing beverages and food over the Internet, something routinely done offline.

The technology works by the electrodes in the drink mimicking the sour flavor of lemonade while the light-emitting diode (LED) lights imitate its color.

I got to try out a "virtual" lemonade that's been "teleported" over the air. https://t.co/vV3BdIc5me pic.twitter.com/hrrGTZicIx

A sensor dipped into a glass of real lemonade collects data on its acidity and color, which is then transmitted via Bluetooth to silver electrode strips on the rim of a tumbler.

The action of a drinker running their tongue over the strip when taking a sip causes the electrodes to simulate the sour taste, while an LED flashes yellow.

The technology can also simulate bitter and salty sensations. It could help people on restricted diets like those who need to cut back on salt.

“We can even help people who want to cut down their calorie intake,” Nimesha Ranasinghe, who led the research team, told Reuters.

“If he craves lemonade, he can have a virtual lemonade, with which he can get the same experience, but with zero calories.”

The technology still requires further improvement, however, such as how the drinker sips from the cup.

“I think it’s definitely the way the tongue touches the cup, because no one would, subconsciously or consciously, put their tongue onto the electrode and then drink the water,” student Genevieve Low, a volunteer who participated in tests of the drink, told Reuters.