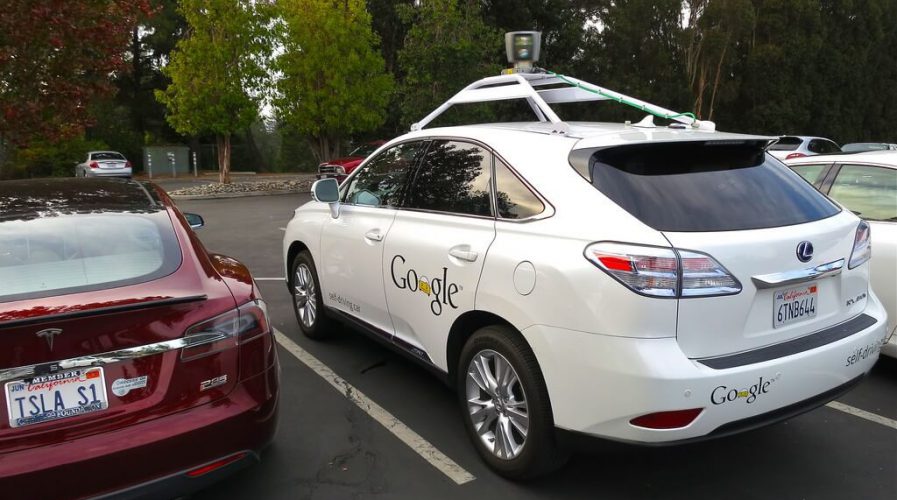 Google has been working on driverless technology through Waymo, a spin-off from its main holdings company. Source: Flickr/jurvetson

With Uber accused of industrial espionage, the heat is on in driverless tech

UBER has been accused of stealing driverless technology from Google; What will this mean for the future of autonomous cars?

With artificial intelligence, machine learning and automation on the rise, the next frontier for technology companies is to automate otherwise labor-intensive tasks or things that otherwise need human intervention to operate.

Take for instance road travel. Companies like Google, Apple, Uber and others, are making inroads into developing driverless technologies that rely on sensors, data, machine learning algorithms, and a wide array of technologies.

For trailblazers like Google, such technology fits well into its playbook, particularly having established moonshot efforts under its holding company Alphabet. In particular, Google has been working on driverless technology through Waymo, a spin-off from its main holdings company. One salient characteristic of Google’s self-driving car is that, unlike other technologies that offer driver-assistance (like Tesla’s autopilot), Waymo’s cars do not have pedals or steering wheels and are fully autonomous.

For other companies, like Tesla and Uber, the applications are more direct. Uber, for instance, is currently focusing on its ride-hailing app business. But one evolution down the line of its product roadmap would include driverless technology – in particular, instead of employing independent partners or drivers who own their vehicles, Uber might run its own fleet of driverless cars to service its on-demand ride-hailing customers.

Amid all these exciting developments in transport tech is a potentially damaging legal battle between Uber and Google.

In the eye of the storm is Anthony Levandowski, an executive at Uber who is being accused of stealing intellectual property from Google. He previously worked at Google, during which he had allegedly copied confidential documents and poaching employees before leaving Google to found his own startup, a self-driving truck company called Otto.

Just a few months after Otto was launched, Uber acquired it for US$680 million – and along with it, whatever technology and intellectual property Otto had. Levandowski also joined Uber as part of its driverless technology efforts.

But this wasn’t the happy beginning Uber had hoped for its foray into the technology. Waymo sought an injunction at the end of March against Uber’s driverless car development and alleges the latter’s acquisition of Otto included around 14,000 files (about 9.7GB) pertaining to Waymo’s driverless technology. As part of the motion seeking injunction, Waymo also asked Uber to turn over the said files.

Pleading the Fifth – a PR disaster?

In this regard, Levandowski has invoked the Fifth Amendment – a constitutional amendment in the United States that protects individuals against self-incrimination.

His lawyers argue turning over files that may pertain to the case as part of discovery in litigation might be self-incriminating, and an “obvious conflict,” particularly as the litigation might lead to a criminal case, his legal counsel shared with The New York Times.

Uber’s legal counsel says the company intends to prove its autonomous vehicle technology was not stolen from Waymo.

“We are very confident Waymo’s claims against Uber are baseless and that Anthony Levandowski has not used any files from Google in his work with Otto or Uber,” said associate general counsel Angela Padilla.

However, Levandowski’s pleading the Fifth may not exactly be helping, as it is tantamount to yet another PR disaster for Uber. It is equivalent to saying “No comment”, but not exactly confirming nor denying anything. Uber itself has sent a mass email to its employees warning of possible negative news coverage over the trial.

The takeaway: What happens to driverless tech now?

Legal battles are not uncommon in the high-technology industries, especially when intellectual property is involved. It may be recalled Apple and Samsung had been embroiled in years-long patent litigation that pertained to the design of Apple’s iPhone and Samsung’s own Android-powered Galaxy S line. However, that particular case was more about interface and physical design.

Waymo’s and Uber’s battles might potentially relate to more fundamental aspects of driverless technologies, which could have a bigger negative impact on the parties involved – particularly Uber – if it is found its autonomous car development was based on stolen data.

Closer to home, Asian ride-hailing giant Grab is also exploring driverless technologies, although in partnership with companies like NuTonomy. Singapore’s government is committed to developing autonomous vehicles and has planned to set aside sections of public roads for trials.

Another company, Delphi, is also currently testing its autonomous technology in the city-state, after demonstrating coast-to-coast autonomous drives in the US in 2014. Delphi plans commercial deployment by 2022.

With autonomous vehicles, it is the user who will ultimately benefit. Waymo cites 94 percent of crashes are due to human error and taking this out from the equation will mean better road safety. Companies like Google, Uber, Tesla, Grab, Delphi and others are taking small, but effective, steps toward this direction.

The question now is that – with or without intellectual property disputes or even criminal litigation along the way – when can we expect fully-autonomous vehicles to bring us places, and will this be limited to certain places where such drastic changes will be economically viable?