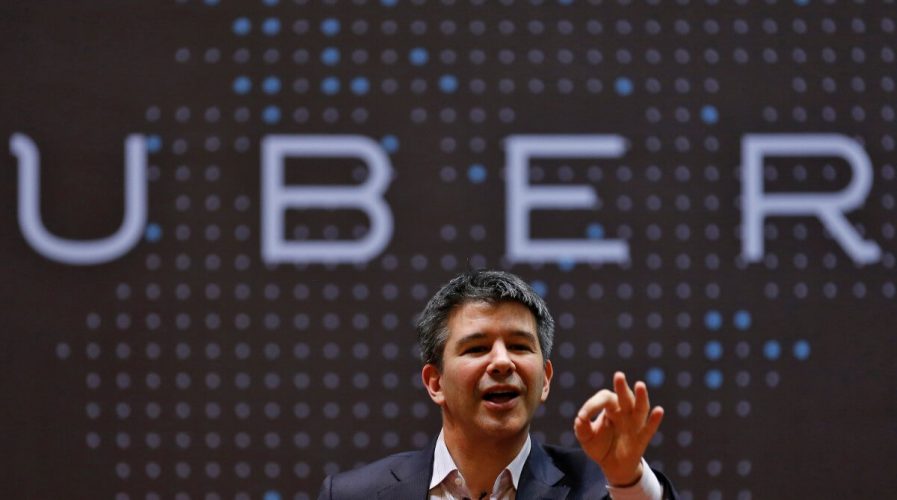 Kalanick speaks to students during an interaction at the Indian Institute of Technology (IIT) campus in Mumbai, India. Source: Reuters

RIDE-HAILING company UBER seems to be on some kind of self-induced downward spiral, with the latest being it tried to pull a fast one on Apple.

As reported by The Verge, Uber has been allegedly engaging in a practice called “fingerprinting” which allows it to identify individual iPhones of former Uber users – even after the app is deleted and the phone reset.

For obvious reasons, Apple has banned this practice, which means Uber had to go about the tracking in a stealthy way.

1. Violated the privacy of @Apple’s customers
2. Hid what they did from Apple

They should be barred from the App Store. pic.twitter.com/6aYjEWABfL

How it did this was Uber sought to camouflage the code involved with the fingerprinting so the practice would be hidden away from Apple employees. The sneaky process, called “geofencing” didn’t work and actually led to a CEO showdown back in 2015 between Apple’s Tim Cook and Uber’s Travis Kalanick.

The news of this confrontation had surfaced recently through The New York Times on how Kalanick repeatedly crosses the line when it comes to business. Cook said if Uber insisted on continuing this practice, Apple would remove it from the App Store – a huge blow to the San Francisco-based company.

An Uber spokesman, however, officially denies tracking users for any nefarious gain and says fingerprinting is typically used to protect users.

“We absolutely do not track individual users or their location if they have deleted the app. As the New York Times story notes towards the very end, this is a typical way to prevent fraudsters from loading Uber onto a stolen phone, putting in a stolen credit card, taking an expensive ride and then wiping the phone – over and over again,” they said.

Hey @uber, adding a "feature" requires you to hide it from Apple engineers, YOU'RE PROBABLY DOING SOMETHING BAD. pic.twitter.com/n4G5Py1DyK

This recently-surfaced kerfuffle just adds to one of the many PR scandals Uber has endured in the past months, most of which are due to Kalanick’s brash decision-making. It lost around 200,000 users during an immigration ban outrage at JFK airport, when it appeared to be trying to profit off the strike.

Also, barely a week had passed after sexual harassment allegations were made from a female engineer, when Kalanick was recorded engaging in a shouting match with an Uber driver.

While Kalanick has publicly apologized for his behavior, admitting he needs management help and is interviewing COO candidates, many employees are unsure if it will make any difference.

Kalanick‘s near-total control at Uber is made possible largely by a dual-class share structure that gives certain owners 10 votes per share, according to the company’s certificate of incorporation filed with the State of Delaware.

“A COO would report to Travis, so structurally, there’s the rub,” said Dave Carvajal, an executive recruiter for venture-backed tech companies. “This COO is going to need to have influence at the board level to affect change.”

In the tech world, a fearless CEO who will do anything to move the company forward is a valuable one, but in the case of Kalanick, he may prove to be bad for business.