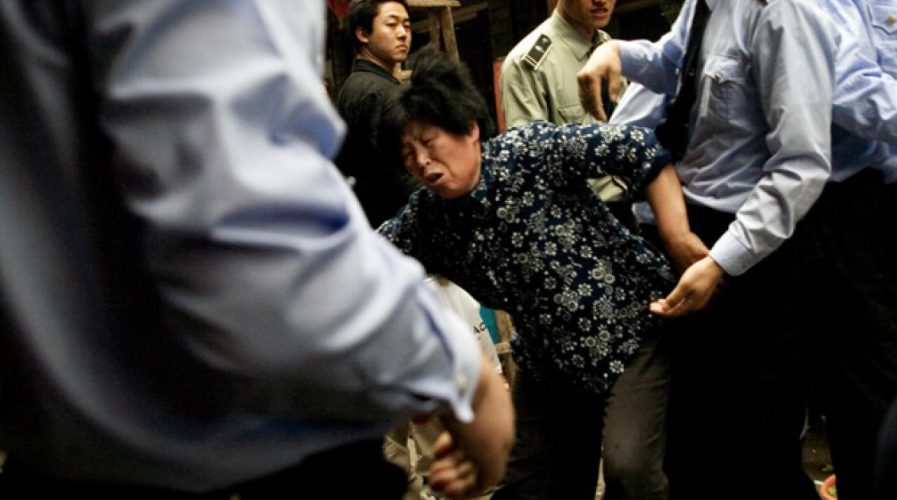 Many stories of violence by chengguan officials have filtered throughout the country, sped up by social media and livestreaming capabilities. Source: Human Rights Watch

IN an unusually transparent move, the government Beijing has ordered urban management officers to be equipped with body cameras in a push back against accusations of violent treatment.

Urban management officers, otherwise known as “chengguan”, are given the authority to act as enforcers in non-police circumstances, such as protecting public property, or ensuring the sanitation of sidewalks and drains.

The chengguan officials have a messy reputation, pockmarked by significant instances of excessive violence, often deviating far and away from their original purpose. Comments from the Sichuan Daily (as reported by the Wall Street Journal) note stories of chengguan officers assaulting ordinary citizens is “practically a part of everyday vocabulary”.

Though chengguan violence is not new, there have been no large-scale investigations into the incidences. Human Rights Watch, in a 2012 report, noted:

“There is no overarching national regulatory framework laying out the permissible scope of chengguan duties, no uniform training requirements or code of conduct, and no systematic monitoring and investigation of alleged chengguan abuses.”

In some cases, officers are trained to avoid visible evidence of abuse: “In dealing with the subject,” said a 2009 Beijing chengguan training manual that circulated online, “take care to leave no blood on the face, no wounds on the body, and [ensure that] no people [are] in the vicinity.”

The force came under heavy scrutiny when they were involved in the death of a watermelon farmer, Deng Zhengjie, in 2013, following a brawl. Other instances of violent retaliation against urban dwellers have made chengguan officers the focus of public ire, which has only been compounded by the increased live-streaming and recording capabilities in the social media-smartphone era.

Social media has not been kind to the chengguan in the court of public opinion. The widespread use of social media platforms such as Sina Weibo and WeChat, coupled with China’s live-streaming boom, has empowered witnesses to collect evidence and recordings of chengguan violence and post them on the Internet where they are seen and watched by million in an instant.

The rise of public dissemination of such information has fed public outrage and blown up reports of chengguan violence. Countless resources including photos, videos and articles can be found across the Internet when searching the term “chengguan beating people”.

“In my dear motherland, every brand-new street has seen the brutality of urban management officers,” wrote blogger Li Chengpeng in a widely circulated essay, which was translated by Helen Gao in the Telegraph.

“Over time, we have become desensitized. But if you insist on looking for an ironic twist, look no further than the dead body of the watermelon vendor.”

The government hopes to use that same technology to bring some accountability to the problem. The policy was put into action last week and requires chengguan forces across the country to maintain recordings of enforcement actions in order to weed out any discrepancies and clear up post-incident uncertainty.

According to a chengguan officer in Henan province, the footage collected by palm-sized body camera officers wear strapped to their uniform cannot be deleted or edited. Cameras can film for four hours on a single charge.

“It’s great,” the officer said to the Wall Street Journal. “If you’re on duty and there’s a conflict, at least now you have evidence,” she said.

WSJ reports chengguan officers defended themselves against public accusations by arguing the scuffles are usually caused by members of the public, rather than the officers themselves. Some say they are the victims and should not be persecuted for the actions of others, with others noting they wore a Google Glass during duty hours.

The recording policy marks the most significant action on the part of the government to curb incidents such as Deng’s death, and is markedly similar to the actions of US enforcement agencies responding to the rising instances of police shootings of black men.

The economic slowdown and increasingly urban population of China have led to the rise of chengguan groups, but it’s those same forces that have pushed the Communist Party to address public discontent and “reclaim its reputation as a defender of the poor”, the WSJ reported.

The chengguan is the most visible and openly engaged of all of China’s enforcement groups, and as a local force, not managed by the Public Security Ministry. The force came into being in the 1990s, in response to a growing urban population and China’s swelling economic fortunes.

The ensuing explosion of street commerce, homelessness and unlicensed street vendors resulted in cities forming these forces to maintain public property, monitor street peddlers and beggars. Eventually, the strongman approach of the chengguan led to a souring of relations between them and the public.

Odds are, the government’s sudden sympathy for and action against chengguan violence come at a time when public opinion of the Communist Party is strained due to a flatlining economy and mounting criticism of human rights abuses.

“Violence on the street against an ordinary individual that goes viral dents the credibility of the government much more than the hidden torture of dissidents,” HRW researcher Maya Wang told WSJ.

Yet, other urban locals have noted the force has become somewhat gentler in their enforcement, perhaps in response to the increasing number of cameras pointing their way. It won’t be surprising if many remain skeptical though – after all, having a body camera and its recordings are not the same as taking action.