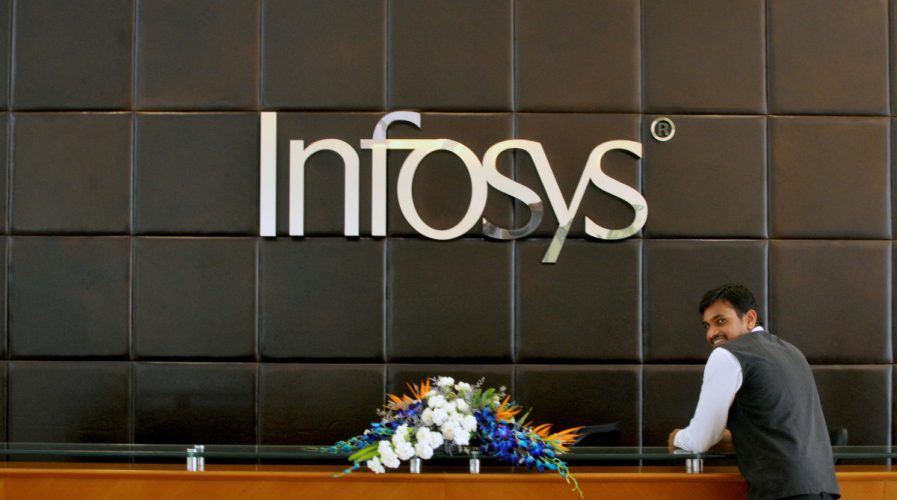 An Infosys employee stands at the front desk of its headquarters in Bengaluru, India. In US, it said on Monday it had leased 35,000sq ft of office space in downtown Indianapolis. Source: Reuters/Abhishek N. Chinnappa

India-based computer services giant Infosys Ltd on Wednesday touted its new strategy to hire and train 10,000 American workers over the next two years at the company’s annual leadership meeting in San Francisco.

Infosys is the largest employer of workers under the United States H1-B visa program for skilled workers, which has been under fire as the Trump administration moves to tighten a range of immigration laws. Many large companies hire so-called outsourcing firms such as Infosys to manage their computer operations.

Infosys announced three weeks ago it would hire 10,000 Americans, and said on Monday it had leased 35,000sq ft of office space in downtown Indianapolis.

Infosys deputy chief operating officer Ravi Kumar said the company would be looking to hire both experienced professionals and recent college graduates at a range of skill levels.

Each month, Ravi said, the company planned to put large batches of prospective employees through training courses of eight to 10 weeks that will prepare them for positions in fields like data analytics, enterprise cloud applications and cybersecurity.

He said the new moves did not reflect any major change in the company’s business model, with US workers being compensated at the same level as H1-B visa professionals.

The company also used the meeting to highlight the launch of Infosys Nia, a new artificially intelligent service designed to allow IT professionals to automate more of their tasks. Infosys stressed AI and automation are the future of technology, and that innovations in these areas will allow enterprises to be more productive without having to hire more people.

“If problem-solving is going to be done by machines, then problem-finding is the human frontier,” Infosys CEO Vishal Sikka said in his keynote. – Reuters