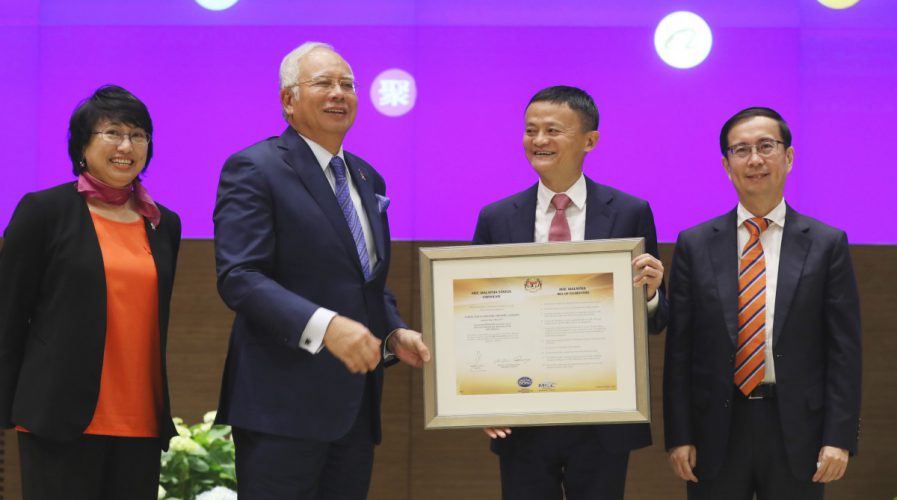 AS testament to Malaysia and China’s strengthening trade relationship, the Malaysia Digital Economy Corporation (MDEC) signed an agreement with the Hangzhou Municipal Government and Alibaba Company Ltd. to set up the first e-hubs in both nations that will be connected with the Electronic World Trade Platform (eWTP) and link the two country’s respective digital trade initiatives.

PM @NajibRazak witnessed the signing of MoU between MDEC and Hangzhou Municipal Govt as well as Alibaba. pic.twitter.com/LmfaRz3Kd5

The agreement stipulates the three parties – Alibaba, Hangzhou’s government and MDEC – will work together to develop the infrastructure necessary to facilitate “seamless cross-border e-commerce trade between Malaysia and China”. This will be consistent with Alibaba’s eWTP, a trade and logistics hub that would “function as a centralized customs clearance, warehousing and fulfillment facility for Malaysia and the region”.

“Alibaba has a vision for an eWTP that empowers small and medium businesses around the world to engage in friction-less trade shared by Malaysia,” Zhang said.

“Our partnership with MDEC is critical as we work together to create the essential infrastructure for digital trade, and achieving Alibaba’s goal to serve two billion consumers, create 100 million job opportunities and support 10 million businesses.”

The new kid on the block is the Hangzhou municipal government, who represented their local chapter of the China Comprehensive e-Commerce Pilot Zone. The zones are part of a project by the Communist Party to establish several cities as cross-border e-commerce zones, or “e-hubs”, that will be home a series of pilot projects aimed at setting the technical standards, regulations and infrastructure necessary to drive more digital trade within China’s borders.

China, like Malaysia, has been working for years to drum up the frameworks necessary to drive e-commerce export numbers in the country. Alibaba was key to setting up many of these e-hubs and Hangzhou will be the first of many cities to pilot these programs, alongside Tianjin, Hefei and Guangzhou.

Malaysia’s Digital Free Trade Zone (DFTZ) was launched in March in an effort to provide support to Internet companies who want to trade goods and services, as well as innovate new digital solutions.

The DFTZ will take shape as a series of physical and virtual zones, with the former comprising of an e-Fulfillment Hub and a Satellite Hub, and the latter will come in the form of an e-Services Platform.

According to MDEC, the DFTZ will support US$65 billion worth of exports while creating 60,000 jobs in the next eight years.

“DFTZ will be a boost to Malaysia’s e-Commerce roadmap that was introduced in 2016, which aims to grow the nation’s eCommerce growth and increase the country’s GDP contribution to RM211 billion (approximately US$47.68 billion) by 2020,” Yasmin said in a statement.

The Malaysian government has been pushing initiatives to pivot the economy into the digital sector, partly through MDEC projects but also through fintech projects supported by the central bank. This relationship has the potential to double the growth of Malaysian SMB’s exports by 2025, while it provides China a significant foot in the door to Southeast Asia’s lucrative markets.

Linking up the two digital trade zones is part of China and Malaysia’s plans to begin implementing the structures needed to build an “e-road for global trade”. The links will be supported by Alibaba’s considerable Internet and big data frameworks, which will establish communications between corporate and government entities in both Hangzhou and Malaysia.

Alibaba, in particular, has been cultivating a deep relationship with Malaysian players, especially after the Global Economic Forum 2017, which was held in Malaysia this year. There, Alibaba had began scouting for local talent and startups to invest in. The company’s total global revenue grew 115 percent year-on-year while its cloud services have been ranked in the top five providers in the world, according to the International Data Corporation (IDC).

China has been eyeing control over the majority of the Asian continent’s trade routes, further compounded by its “One Belt, One Road” project, which envisions Chinese-led cooperation on issues of trade, travel and political control.

The cool relationship between China and the US’s Obama Administration drove the Middle Kingdom to begin consolidating its power base in the largest continent in the world, as evidenced by the aggressive moves by Chinese conglomerates to begin expansions into Southeast Asia.

It’s unclear what the warmer (if more unstable) relationship will be like with the Trump Administration, but China is looking beyond those political issues, and turning to its own plans for Asia.

World leaders gathered in Beijing over the weekend for the inaugural “One Belt, One Road” summit to further discuss the infrastructure and trade agreements between the various regions of the continent.