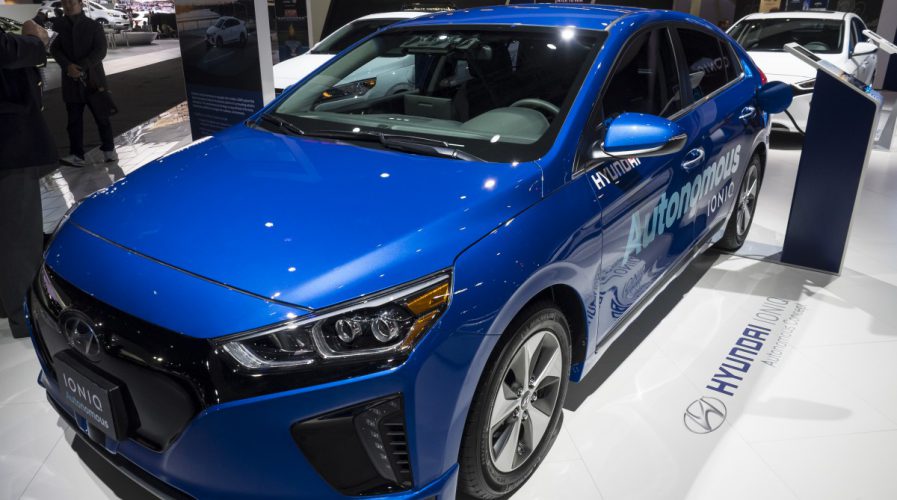 Hyundai IONIQ autonomous car at the International Auto Show in Detroit. The South Korean government has allowed Hyundai autonomous cars set up with Samsung-made “advanced sensors and machine-learning systems” to be tested on its roads. Source: Shutterstock/Ed Aldridge

Samsung gets approval to test-drive autonomous cars in South Korea

AT this point, we’re no longer surprised by the growing list of newcomers to the self-driving car race.

Last month, Apple joined the throngs of companies that has won a test driving spot on California’s roads and we just learned Samsung has now also gotten in the game starting with its home market.

Samsung is, of course, more than a smartphone maker, as it also makes consumer electronics and home appliance products. So while not out of left field that it’s also working on autonomous vehicles, the news here is Samsung has received approval from the South Korean government to test its self-driving technology on public roads.

As reported by TechCrunch via the Korean Herald, the country’s Land, Infrastructure, and Transport Ministry gave the green light to Samsung’s Hyundai test car, which was the first auto company to get approval from the government. Samsung is now just one of 20 companies granted permission to test on public roads in South Korea.

The Guardian also says the cars will be set up with Samsung-made “advanced sensors and machine-learning systems” – a sign the company is going the software route instead of trying to build its own vehicles.

Regulations related to testing self-driving technology in South Korea have eased since last year. To put this into perspective, back when Hyundai got the OK to begin testing in February 2016 – two people were required to be on board the vehicle. Today, companies only need to have one human driver on board.

Recent regulatory changes pertaining to self-driving cars in South Korea are also an indicator to shifts in the United States. The autonomous vehicles of South Korea’s future will not have any steering wheels or pedals, which are also in the amendments made to California’s regulations. The state of Michigan also recently passed a similar law.

Some are referring to the self-driving car race as “the gold rush,” and Samsung’s latest move pits it against the likes of Uber, Google’s Waymo, and Apple – one of Samsung’s arch rivals – all of which already have test cars on public roads.