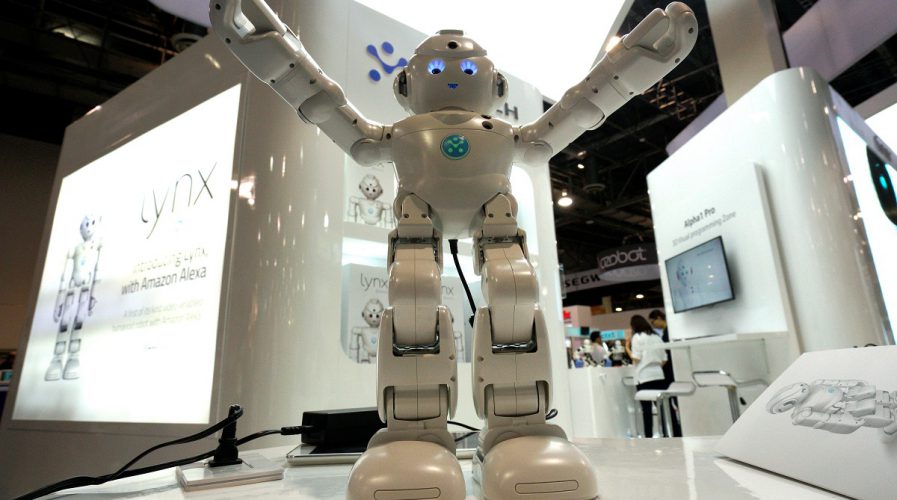 A Lynx robot with Amazon Alexa integration is on display at the Robotics Marketplace at CES. Pic; Reuters

Is Southeast Asia ready for the robotics revolution?

TECHNOLOGICAL advancements over the past couple of years have brought the prospect of a robotic workforce closer to reality.

Experts believe we are now on the verge of the largest economic transformation in recorded history, with robots set to become a common feature of modern working environments.

The long held belief that this robotic revolution would impact developed countries long before it affected developing nations, with low labor costs, is proving to be a misconception.

The International Data Corporation’s (IDC) publication Worldwide Robotics 2017 Predictions is one of many recent reports which concludes that robotic technologies will jeopardise the livelihoods of millions of people, while the Bank of England estimates that 95 million jobs will be taken over by robots within the next 10 to 20 years.

According to the International Labour Organization (ILO), Southeast Asia will experience serious upheavals as automation spreads across the region. It “estimates that about 56 percent of all salaried employment in Cambodia, Indonesia, the Philippines, Thailand and Vietnam is at risk of displacement due to technology in the next couple of decades”.

The ILO report suggests the impact in Southeast Asia would be felt hardest on “labor-intensive sectors such as textiles, clothing and footwear” – sectors that employ millions of workers across the Asean Economic Community, many of whom are women.

These sentiments are reinforced by Nick Srnicek, co-author of Inventing the Future: Postcapitalism and a World Without Work:

“There is an idea that automation is a rich country problem, but it’s much more of a problem for lower income economies… It’s not going to be easy to turn this into an opportunity and I don’t think the traditional approaches of the labour movement are going to solve it.”

Deborah France-Massin, director of the ILO’s Bureau for Employers’ Activities, also warns that countries in the region will face serious challenges, saying, “Countries that compete on low-wage labour need to reposition themselves. Policymakers need to create a more conducive environment that leads to greater human capital investment, research and development, and high-value production.”

Jürgen Rüland, professor of political science at Germany’s University of Freiburg, predicts the next industrial revolution will lead to social unrest by further escalating social inequalities.

“Job losses will thus further deepen the already rapidly increasing disparities between rural and urban areas and between the better- and the less-educated segments of the population,” he says.

Furthermore, it is no longer just cheap labour that is threatened by automation – new technologies will also replace workers in more highly skilled jobs, as well as work in the service sector, jeopardizing occupations which had previously been considered safe from automation.

The implications of this monumental shift need to be acknowledged and governments throughout Southeast Asia need to begin preparing for a world in which robots will play a larger role in the workplace.

One solution which some governments in Europe have been considering is providing an unconditional basic income to all citizens, an approach currently being trialled in Finland.

SEE ALSO: Are we ready for a universal basic income?

Basic income advocates, including Silicon Valley CEOs such as Elon Musk and Bill Gate, argue that as artificial intelligence (AI) takes over the work of employees, governments will not be able to tackle mass unemployment by conventional means. A basic income will be needed to ensure social stability.

Nick Srnicek, co-author of Inventing the Future: Postcapitalism and a World Without Work also believes that without a universal basic income, large scale unemployment could lead to social unrest. Furthermore, the economy would slowly grind to a halt with insufficient numbers of individuals to purchase the products and services supplied by the automated workforce.

While the concept of basic income could realistically be introduced to areas of Europe and North America over the coming decade, it is unlikely that this approach will be adopted in Southeast Asia until it’s been tried, and proved successful, throughout other regions of the world.

As such, policymakers in Southeast Asia will need to adopt other initiatives to tackle the challenges of the next industrial revolution, such as retraining and education.

Retraining low skilled workers is an important step and one which has been suggested by Thomas Davenport and Julia Kirby, who outlined five strategies for adapting to life in the robotic age.

Davenport and Kirby argue that it will be necessary for workers to develop their knowledge and skills to remain employable in the future jobs market. Computer and engineering skills will be particularly important as machines and robots will still need tech savvy individuals to monitor, program, fix and adjust their work.

A lab technician in a pharmaceutical factory. Source: RGtimeline/Shutterstock

Computer engineering will be an important occupation for decades to come and it is for this reason that education systems in the US and Europe are making a concerted effort to produce more graduates with science, technology, engineering and mathematics (STEM) skills. Individuals with a STEM education will be better equipped to negotiate the modern economic landscape.

Furthermore, tech savvy individuals who are able to think outside the box will be able to develop the next generation of technological solutions to overcome the challenges of life in the 21st Century, in same the way Silicon Valley entrepreneurs have been doing for the past two decades.

In Southeast Asia, Singapore and Vietnam are the countries which are best placed to meet the challenges of the robotic revolution. Both countries have significantly improved education systems which rank highly in international educational rankings. Tech skills, computer coding ability and STEM skills are also high in these countries, as is an entrepreneurial spirit.

Burma and Laos, the poorest countries in the AEC, both have poor infrastructure and low internet penetration rates, which will hinder the growth of robotics and automation for the foreseeable future. As such they will probably be the last countries directly disrupted by the robotics revolution.

This leaves Thailand, Cambodia, Malaysia, Philippines and Indonesia to face the most immediate consequences of the next industrial revolution.

For these countries, the ability to successfully implement STEM education and relevant retraining programs will determine their success in overcoming the challenges of the new economic landscape.

Countries which fail to upskill their work forces, and provide school leavers with the relevant skills for the 21st century, may face a lost generation of workers, unemployed and unemployable.