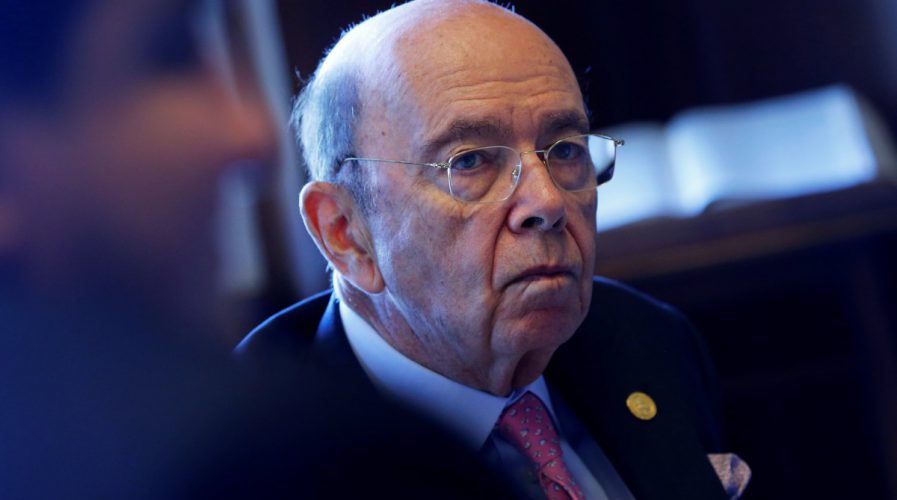 Ross sits for an interview in his office in Washington, US. Source: Reuters

US jittery over China’s dominance in chipmaking industry

UNITED STATES SECRETARY OF COMMERCE Wilbur Ross sees the US semiconductor industry as still dominant globally, but he says he’s worried it will be threatened by China’s planned investment binge to build up its own chipmaking industry.

Ross told Reuters in an interview this week his agency was  considering a national security review of semiconductors under a 1962 trade law because of their “huge defense implications” including their use in military hardware and proliferation in devices throughout the economy.

He has launched similar “Section 232” reviews of the US steel and aluminium sectors, where a flood of imports especially from China has depressed prices, threatening the industries’ long-term health.

The probes could lead to broad import restrictions on the metals, and the Trump administration could potentially take similar actions based on the findings of a semiconductor investigation.

“Semiconductors are one of our shining industries, but they have gone from substantial surplus to the beginnings of a deficit,” Ross told Reuters.

“China has a US$150 billion program to take that much further between now and 2025. That is scary.”

The 79-year-old billionaire investor was referring to China’s plans for massive state-directed investments in semiconductor manufacturing capacity under its “Made in China 2025” program, which aims to replace mostly imported semiconductors with domestic products.

Ross’ predecessor Penny Pritzker warned last November about looming market distortions if China builds too much semiconductor capacity. Ross said while he understood Beijing’s logic in developing its domestic chip industry, “that’s going to be a struggle” from a US trade standpoint.

US semiconductor makers, meanwhile, have other ideas about how to secure their future. Their major trade group, the Semiconductor Industry Association (SIA), advocates open trade and increased access to international markets, which now buy 80 percent of US-made semiconductors. US chipmakers also depend on a complex global supply chain and have nearly half their production capacity located overseas.

“So while we fully support efforts to ensure trade in semiconductors is fair and market-based, we do not believe a Section 232 investigation is the right tool to be applied to our industry” SIA president John Neuffer told Reuters.

One area where there appear to be some differences is how to define the industry’s trade balance.

Commerce Department trade data showed “semiconductors and related device manufacturing” had a trade deficit of US$2.4 billion in 2016, with exports of US$43.1 billion and imports of US$45.6 billion. But that category includes rapidly growing imports of non-semiconductor devices including solar cells and light-emitting diodes (LEDs) as well as some raw materials.

In a new submission late on Wednesday to Commerce for a study on trade deficits, SIA said excluding the non-semiconductor products shows the sector had a US$6.4 billion trade surplus last year, with exports of US$41.3 billion and imports of US$34.9 billion.

Neuffer said the industry was ready to work with the Trump administration to find ways to persuade China to allow its semiconductor industry to develop in a market-driven way and not discriminate against foreign firms.

He said the government could make the US a more competitive environment for semiconductor output through tax reform that does not penalize overseas earnings, immigration reform that allows the industry to attract new talent, improvements to US education and more spending on basic research.

“The Chinese are determined to build a semiconductor industry,” Neuffer said. “I think the strongest pillar of any strategy going forward has to be our government helping to create an environment where we can pedal faster and stay as far ahead as possible.” – Reuters