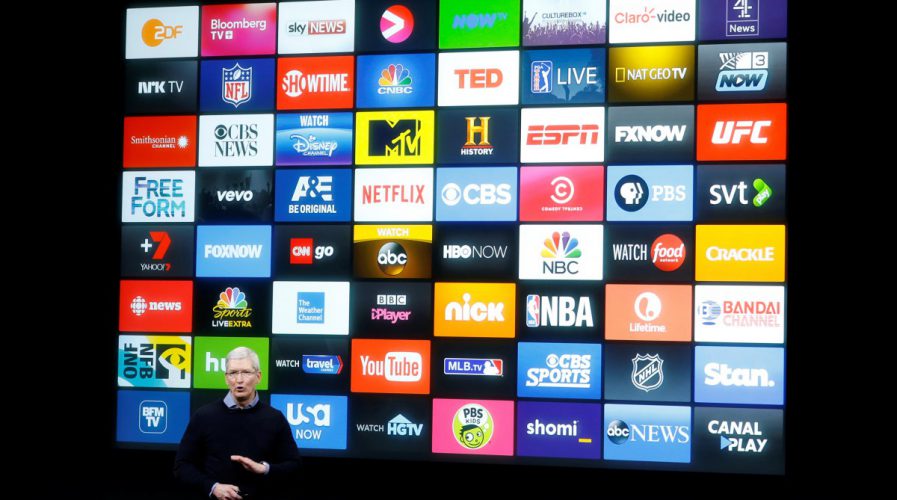 Apple CEO Tim Cook speaks about the Apple TV during an event at Apple headquarters in Cupertino, California. Source: Reuters

Jamie Erlicht and Zack Van Amburg, responsible for hit shows such as Breaking Bad, Better Call Saul and The Crown, will join Apple in newly created positions to oversee all aspects of video programming, the technology company said in a statement on Friday.

“Jamie and Zack are two of the most talented TV executives in the world and have been instrumental in making this the golden age of television,” Apple’s Internet Software and Services senior vice-president Eddy Cue said.

“There is much more to come,” Cue said of Apple’s video effort.

SEE ALSO: Innovation and consumers must be top priorities for PayTV industry – NAGRA

The new hires demonstrate a serious commitment by another deep-pocketed technology company to produce quality television shows. Erlicht and Van Amburg have served as senior Sony television executives since 2005.

But Apple did not elaborate on its strategy, leaving investors guessing how many shows it plans to distribute, how much it will spend and where the programming will be available.

The company is playing in an increasingly competitive field. Amazon.com Inc and Netflix Inc have invested billions of dollars in award-winning comedies and dramas featuring A-list Hollywood stars. And social media company Facebook Inc has signed deals with millennial-focused news and entertainment creators, including Vox and BuzzFeed, to make shows for its upcoming video service.

Apple began its move last week with reality program Planet of the Apps, an unscripted show about developers competing for venture capital funding. The series is available only to subscribers to Apple Music, a US$10-a-month streaming service.

A father/daughter duo. A fitness friend. A mall in your pocket. Watch Episode 2 tonight, only on @AppleMusic. https://t.co/dPZYo6mHVi pic.twitter.com/KTDDBL9U9k

Apple has one huge advantage compared with other companies – 1 billion iPhones, iPads and other devices that run on Apple’s mobile operating system and offer a broad distribution platform. The company has widely promoted Planet of the Apps across iTunes, the App Store, Apple’s website and elsewhere.

As tech companies push further into the content business, pressure mounts on traditional media outlets that do not have the same amount of data on viewers or the ability for content to be a loss leader, said Rich Greenfield, an analyst with BTIG.

“These companies do not need to make money off videos because they can make money other ways,” Greenfield said. “And they are going to have tons of data on their viewers.”

It is more cost-effective for Apple to pay for original content and secure licensing deals on its own than to buy a content company, said Moody’s analyst Gerald Granovsky.

“From a credit perspective, we’d much rather see Apple overpay to deliver original content than pay US$50 billion to buy Netflix and basically compete for the same content,” he said.

“They’ll definitely get a better bang for their buck by focusing on their Apple TV product.”

For Sony, the departures come as the Japanese conglomerate revamps its movie and television studio under new chief executive Tony Vinciquerra. In a memo to staff, Vinciquerra suggested Apple could be a buyer of Sony programming.

“While we are sad to see them go, we are excited by the opportunity to work with them as partners in the future,” he said. – Reuters