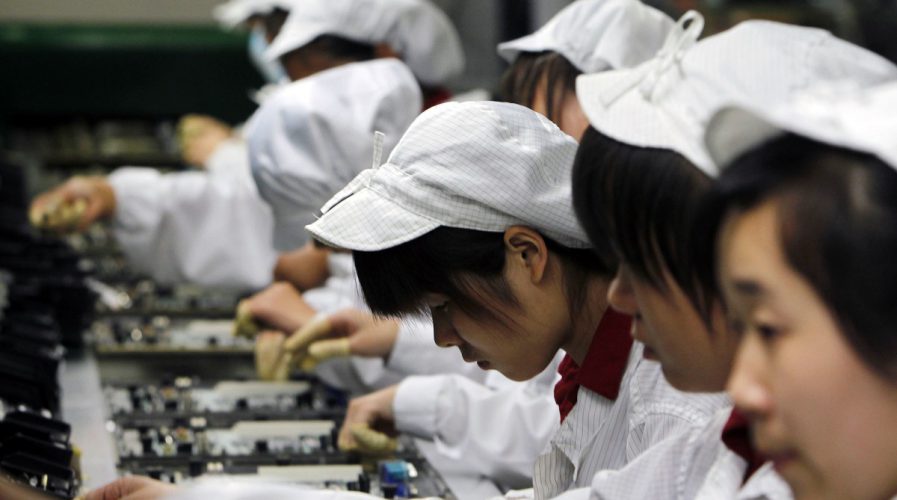 Staff members work on the production line at the Foxconn complex in Shenzhen, China. Source: AP

BUSINESS confidence in Asia rose to a three-year-high in the second quarter of the year, propelled by a slew of favorable economic data across the region and easing concerns over the health of China’s economy, a Thomson Reuters/INSEAD survey showed.

The Thomson Reuters/INSEAD Asian Business Sentiment Index , representing the six-month outlook of 101 firms, climbed to 74 in April-June from 70 three months earlier. A reading over 50 indicates a positive view.

“The US is reaching good levels of GDP and employment, with Europe finally recovering and Asia seeing less risks ahead. China looks like it’s in a more stable situation after having ups and downs because of capital outflows over the last couple of years and also the risks of a debt crisis.”

China is widely expected to meet its 6.5 percent economic growth target this year without too many bumps, helped by a pick-up in exports and stable growth in factory output and retail sales. The government has also sought to reduce debt.

Reflecting the upbeat picture, the country upon which much of Asia depends for trade scored a business sentiment subindex of 75, up from 72 three months prior.

In nearby Japan, sentiment hit its highest-ever with a subindex of 83 compared with 61 in the previous quarter and an average of 58 in the survey’s eight-year life. The country’s central bank in April offered its most optimistic assessment of the economy in nine years, saying it was turning toward expansion.

Sentiment rebounded the most in South Korea with a 50-point jump in its subindex to 75. The result came after the country’s new president vowed to review a decision to deploy a US anti-missile system which had angered China and prompted a boycott of Korean goods.

“The cloud of political risk has disappeared,” Fatas said. “Last quarter the data for South Korea was looking weaker. There was potential for crisis with some trading partners, in particular China.”

Sentiment also edged up in India and Thailand, but weakened in Australia, Taiwan and the Philippines. Singapore posted the lowest subindex of 62 – but even that was the strongest lowest subindex the survey has seen since it began in 2009.

Thomson Reuters and INSEAD polled companies from June 2 to 16. Of the 101 respondents, 56 percent rated their six-month outlook as positive, the highest proportion in over six years. 37 percent were neutral and 7 percent were negative.

The most bullish respondents were from the construction and engineering as well as transport and logistics industries, with half of such firms saying business volume had grown over the past three months.

The two sectors are set to benefit from China’s pledge in May to lend about $56 billion for infrastructure projects across Asia, Europe and Africa as part of its Belt and Road initiative.

The metals and chemicals industry registered the biggest jump in sentiment, by 41 points to 81, while confidence was also buoyant among firms in the healthcare, financial and retail sectors.

“We are on track to achieving our goal of making 100 million products available across all of our six markets.”

The real estate sector and the household, food and beverage sector tied for the lowest subindex, while sentiment in the technology and telecommunications industry fell 7 points to 67.

Survey respondent Intouch Holdings PCL, a Thai telecoms firm, said it was anticipating positive impact in the second-half of the year from the mobile and fixed broadband business.

“Overall, mobile competition still remains due to continued handset campaign offerings,” the firm said in an email to Reuters. “However, we see an opportunity from an uplift in data consumption from customer’s behavioural changes.”

Other risks cited include an inconsistent US administration and protectionism. The US president has pledged to pursue policies widely described as protectionist, including withdrawing from the Trans-Pacific Partnership trade pact. – Reuters