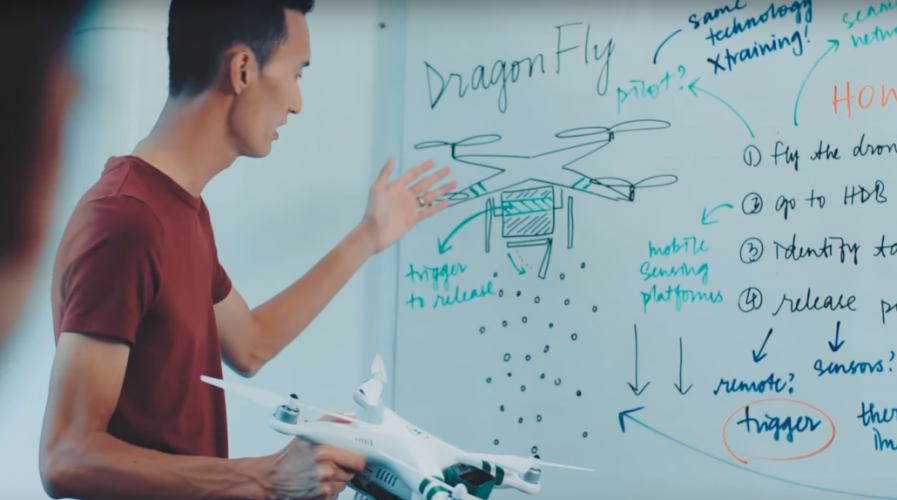 The team at Garuda working on the company’s DragonFly drone. Pic: Garuda Robotics

AERIAL shots of your wedding, stunning montages of the Johannesburg skyline, the delivery of your next Amazon order, maybe even your next lunch – drones have begun populating the skies and are being introduced to all sorts of industries. However, what happens once the romance and the novelty of a tiny flying robot with an even tinier payload wears off?

“You can’t deny that [drones] are exciting, they capture the imagination,” says Mark Yong, the chief executive officer of Garuda Robotics to Tech Wire Asia. “We can’t fly, so anything that transcends our physical limitations actually captures the imagination. The danger is that the novelty wears off, and people don’t quite move on to the next stage.

“It’s the Gartner Curve, right – how does it actually become useful before the plateau of productivity?”

Yong’s Garuda, formed in partnership with his co-founder, Jiin Joo Ong, hopes to wed the gravity-defying potential of drone technology with the needs of industry and enterprises. Tech Wire Asia spoke to Yong at e27’s Echelon Malaysia conference, which was held in Penang, Malaysia.

In his pre-Garuda days, Yong was an academic, and it shows – he patiently explains things with a myriad of examples, eyes glittering with excitement about the possibilities of the future of drone technology. After leaving Michigan University where he obtained his Masters, he returned to Singapore as a lecturer at Nanyang Technological University,  and would later have a hand in setting up a robotics course for the national education system.

“I started a robotics module for students…for them to experience what I experienced as a student at Carnegie Mellon University (CMU),” he says. “Being able to go from your textbook and the things that you learned in class to hands-on [work]. There’s really no fixed answer…It’s really about how you solve a problem, but also how well you compete against other people who are looking at the same problems.”

In his undergraduate years at CMU, Yong worked with the university to develop search and rescue robots in a program that was set up in the aftermath of 9/11. The disaster that changed the world also revolutionized the way people thought about robots – the industry had the potential to provide value in a way that had not quite been reckoned with before. It’s clear from his speech that Yong spends a lot of time thinking about this very intersection of technology and life itself, and where technology can and should come into play.

“Today we are a commercial company; the drones are something that people want and the problems that we solve are very real, immediate, very tangible,” he says. While taking photos and aerial video was all well and good, he and his co-founder were much more interested in the potential uses of drone technology to tackle the problems various industry players were facing.

The initial bet on drones came from an ambition to reach beyond novelty, beyond what the industry knew at that very instant, and develop solutions for the real world. “We’re not interested in [selfies and wedding photos], we’re interested in industrial application,” he says. “Helping enterprises and individual business owners to solve difficult problems.”

“And usually in the four Ds: dull, demeaning, dangerous and dirty. That’s where the promise of robotics really comes in. You want take people out of terrible situations and have robots do the things that they’re really good at.”

Garuda came out of bet that software would ultimately transform the way industry thought about drone technology and its uses in the industry. “The original thesis was yes, software was going to be the ultimate value add-on,” he says, recalling that after the company won Tech in Asia’s 2013 Startup Arena competition they had to really reconsider what exactly were the needs of the market at the time.

Eventually serendipity took its course in the form of cheaper drone parts from Chinese factories; the cost of building a drone army fell dramatically, and at the same time industries were beginning to pay attention to the potential of drones to drive down costs, increase data mining capabilities and reduce risks toward humans.

Garuda began focusing on three areas: infrastructure, security and agriculture. Each industry had their own benefits, such as Southeast Asia’s development of basic infrastructure and its role as the palm oil source of the world. Agriculture proved to be a winner for the company, Yong says, as drones had the potential to fill the industry’s thirst for easily obtainable, accurate information without having to rely on unreliable manpower.

“If you think about the efficiency gains you help them get – if you help them with 2 to 3 percent improvement in their productivity, or you help you a bunch of people stay safer when they’re working in the fields,” he says. Garuda developed various machine learning-based softwares that could quickly and accurate calculate tree populations, while also determining tree health.

“It’s not just about the tech; it’s really about building it into a workflow that enables value to be created,” he says.

Aside from agriculture, the company’s work also extends to mapping and monitoring infrastructure, as well as providing security for high-risk work. He gave the example of inspectors of cable car lines or solar panels; allowing a drone to run those tasks would protect humans from having to relay ropes hundreds of feet up in order to run maintenance of infrastructure.

However, as with all new technologies, it’s worth considering the increasing intrusion of drones in our daily lives. It’s one thing to have drones buzzing around taking photos of people out and about, it’s another thing entirely if drones can intrude on private property or spy on competition. When asked about the possibility of the increasing ubiquitousness of drones disrupting our rights to privacy, Yong spoke about the subject in terms of trade offs, and the conversations we have yet to have about it when it comes to drones. He emphasized the fact that his company takes pains not to infringe on the privacy of those around them.

“We take privacy very seriously,” he says. “In principle, we don’t want to cross that line. That sometimes complicates our operational planning, but we think it’s important because it’s just a different facet about how we treat our privacy in general.”

Does the rise of drones mean the end of physical privacy?
https://t.co/8MTzSHQYLz pic.twitter.com/Wq7RF82lVv

But at the end of the day, the balancing act of deciding the precise ethics of drone technology has yet to be fully interrogated – should government bodies have unfettered access to drones, when they have a mandate to protect the public? Or would it cross into uncomfortable surveillance?

“We deal with this problem all the time. If we anonymize data and trends, there is some value because it does help public safety,” he says. “At the same time when people say you should have encryption backdoors on messaging system, I think that’s bad because I think we do have a reasonable expectation of privacy.”

At the same time, government intervention in the regulation of drones is of paramount importance. Yong was clear on the merits of having the “transparent” regulation of drones in Singapore, but also on its downsides. Regulation, as with all technology, can choke innovation and business, unless it’s done right.

“It’s critical that it’s transparent so there’s predictability; that’s so we can tell our clients and allow us to prepare,” Yong says. “We understand that it’s necessary but they have a very delicate balancing act.”

“These things take years, if not decades, and I think it will take that long. But what can happen now is baby steps, that is very clear regulations about what can be done and what can’t be done.”