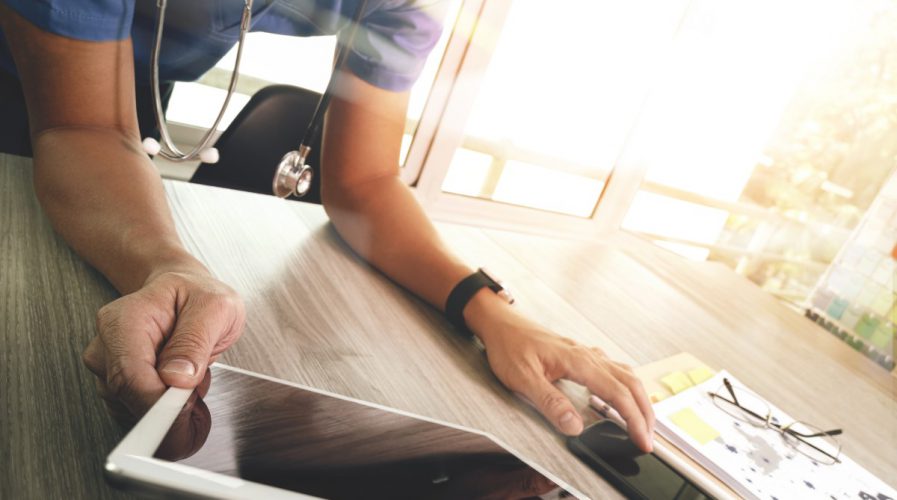 The healthtech space is growing… but are the industry’s new players approaching it the right way? Source: Everything possible/Shutterstock

Healthtech has a long journey to the forefront of innovation

THE HEALTHTECH sector is a largely under-funded technology space, especially when compared to fintech, which is dangerously close to over-saturation.

However, the industry is at a crossroads, and the intersection of affordable hardware and sufficient data sets has meant that a sea change is imminent.

panel at #ECasia2017 talking about disruptive health tech with @gilliantee of Homage, Nawal Roy of Holmusk and Julien De of Galen Growth pic.twitter.com/uA331HoYp6

“What we are going through now in medical research as well as disruption is really taking a massive turning point,” said Julien de Salaberry, the co-founder of Galen Growth Asia, an organisation focused on growing the healthtech ecosystem in Asia.

De Salaberry was speaking on a panel at the Echelon Asia Summit 2017 conference in Singapore alongside Gillian Tee, co-founder and CEO of Homage, and Nawal Roy, founder of Holmusk. The three discussed the current state of the Asian healthtech industry, its many challenges and the road ahead.

Moderator Carolyn Ng from Vertex Ventures observed an “increasing flood of companies” in the healthtech space, particularly with regards to startups tackling diabetes. “For investors, it’s like ‘not another diabetes platform, oh no not another AI data analytics platform’.”

“I would say that we can have another 100 companies looking at diabetes but the problem is so large that we aren’t able to solve it,” replied Roy, who also noted that many players in the space could be “posturing” as a healthtech company while really being a “huge marketing campaign” offering little to no real service.

“We could have a large mass of startups, but the problem could not be solved.”

Roy pointed out that though healthtech companies are bringing their innovations to bear against clinical problems, these startups are largely trying to solve “macroeconomic problems”.

“There could be five other Holmusks in Singapore and you still can’t capture the market,” he said. “I personally would love to have more guys come into the [market] and make the competition more intense, but also this would filter out the postures in the market.”

Roy’s idea of “posturing” is interesting as it suggests startups are merely entering the scene to automate traditional health services as opposed to using technology to rethink healthcare supply chain solutions.

“On the ground, it’s not just about inserting IoT or throwing technology at the problem but really understanding how tech is an enabler to the bigger part, which is: what is the best kind of healthcare, what is the holistic definition?” said Tee. “For Homage, we see technology as an enabler.”

These are difficult questions to answer and the emergence of the healthtech industry is forcing us to consider the distinct nature of healthtech as compared to say, biotech or medtech. De Salaberry suggests that biotech—which includes research into molecular and synthetic biology—and medtech—anything requiring implants or FDA regulation at a specific class level—are distinct from healthtech, whose growth has been driven largely by our increasing access to data and the falling costs of medicine.

These questions can baffle even the savviest adopters of technology, and the biggest impact is that the healthtech sector has been largely ignored by investors who lack real know-how, and even general knowledge, about the industry’s potential.

“Most investors struggle in this part of the world,” de Salaberry said, with the information necessary to make informed decisions in the healthtech space and its ancillary regulations.

“The way we visualise the traditional healthcare delivery model is as a hardware business,” said Roy. “But healthtech, the way we think about it is a software business.”

This shifting identity of the healthtech industry means it’s hard for even early adopters to really understand the underlying quality of this relatively nascent industry.

As with any industry in which there’s a significant lack of widespread information, especially so in medicine, which has a natural hierarchy with doctors and healthcare professionals sitting at the top.

“Raising money for healthtech is not easy. You become a professional beggar,” said Roy about his experience in trying to raise capital in the healthtech space.

He notes the space is growing quickly, though risk and growth capital remains scarce on the ground. The entrepreneurs working in their industries have had to work to not only educate their potential users, but also the investors who might want to enter the market.

“We are pushing up against a whole new landscape of what it means to be in healthtech,” said Tee.