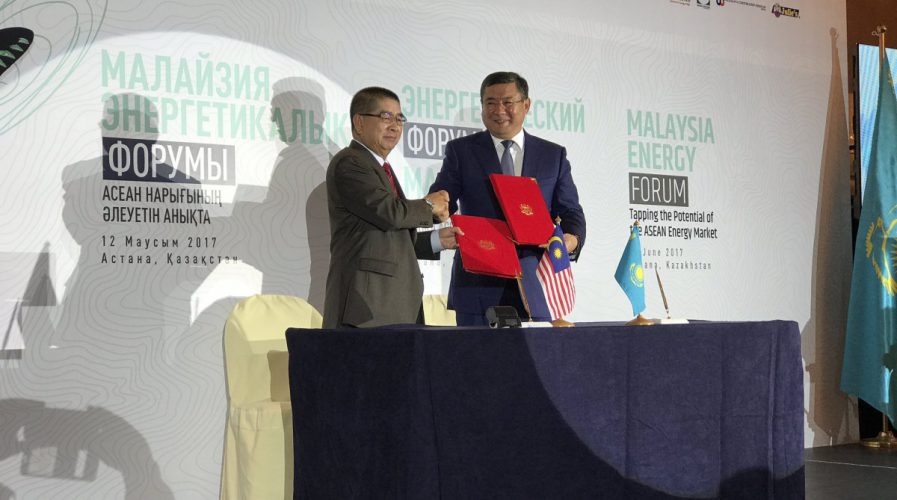 Maximus and Sadibekov after signing the MOU. Source: Twitter/Malaysia EXPO 2017

Malaysia and Kazakhstan team up in boosting green technology

A MEMORANDUM of Understanding (MoU) to identify bilateral co-operations in renewable energy, green buildings, smart cities and carbon emission mitigation has been signed between Malaysia and Kazakhstan earlier this week.

“The cooperation will serve our common interests and contribute to the enhancement of the economic and social development of the people of both countries,” Maximus said.

“Malaysia has a lot of experience in the green technology field, which can contribute to Kazakhstan realizing its goal for renewable energy to contribute to half of its energy needs by 2050.”

Maximus said Malaysia’s relationship with Kazakhstan had been fruitful, with 99 percent of the trade volume between the two nations involving Kazakhstan importing products from Malaysia, such as wood, marble, electronic chips and palm oil.

However, trade between the two countries dropped slightly last year to RM360.7 million (US$84 million) from RM429.5 million (US$100 million) in 2015 due to foreign exchange fluctuations.

The bilateral agreement will contribute to the RM1 billion in trade and investments the Malaysian government wants to secure at Expo 2017.

The Malaysia Energy Forum, themed “Tapping the Potential of the Asean Energy Market”, is organised by Malaysia during Expo 2017 to showcase the nation’s emerging market leadership in Green Growth.