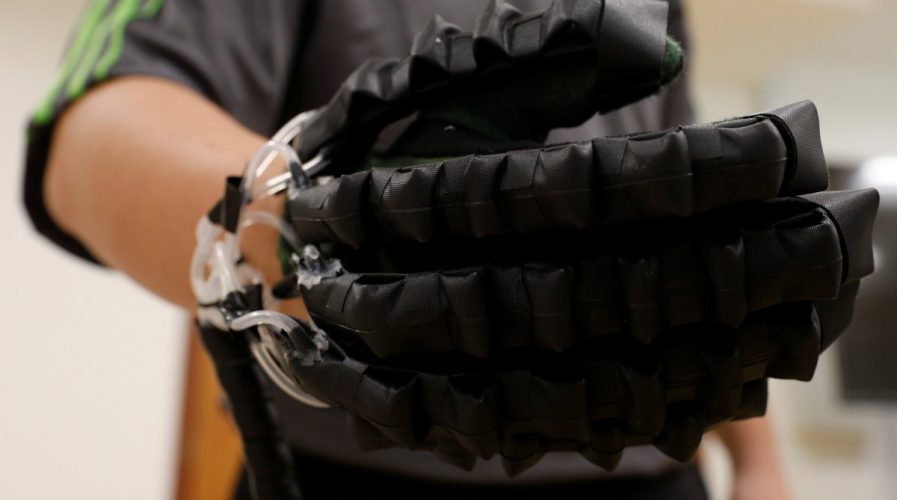 A researcher shows a fabric-based soft robotic glove at the National University of Singapore. Source: Reuters

BORROWING from nature, some machines now have arms that curl and grip like an octopus, others wriggle their way inside an airplane engine or forage underwater to create their own energy.

This is technology that challenges how we think of, and interact with, the robots of the not-too-distant future.

Robots are big business – by 2020, the industry will have more than doubled to US$188 billion, predicts IDC, a consultancy. But there’s still a lot today’s models can’t do, partly because they are mostly made of rigid metal or plastic.

Softer, lighter and less reliant on external power, future robots could interact more safely and predictably with humans, go where humans can’t, and do some of the robotic jobs other robots still can’t manage.

A recent academic conference in Singapore showcased the latest advances in soft robotics, highlighting how far they are moving away from what we see as traditional robots.

“The theme here,” says Nikolaus Correll of Colorado University, “is a departure from gears, joints and links.”

One robot on display was made of origami paper; another resembled a rolling colostomy bag. They are more likely to move via muscles that expand and contract through heat or hydraulics than by electricity. Some combine sensing and movement into the same component – just as our fingertips react to touch without needing our brain to make a decision.

These ideas are already escaping from the lab.

Rolls-Royce, for example, is testing a snake-like robot that can worm its way inside an aircraft engine mounted on the wing, saving the days it can take to remove the engine, inspect it and put it back.

Of all the technologies Rolls-Royce is exploring to solve this bottleneck, “this is the killer one,” says communications head Oliver Walker-Jones.

The snake, says its creator, Arnau Garriga Casanovas, is made largely of pressurized silicone chambers, allowing the controller to propel and bend it through the engine with bursts of air. Using soft materials, he says, means it can be small and agile.

A soft robot designed in the form of a salamander is displayed in Singapore. Source: Reuters

For now, much of the commercial action for softer robots is in logistics, replacing production-line jobs that can’t yet be handled by hard robots.

The challenge, says Cambridge Consultants’ Nathan Wrench, is to overcome the uncertainty when handling something – which humans deal with unconsciously: figuring out its shape and location and how hard to grip it, and distinguishing one object from another.

“This is an area robots traditionally can’t do, but where (soft robots) are on the cusp of being able to,” Wrench said.

Investors are excited, says RightHand Robotics co-founder  Leif Jentoft because it addresses a major pain point in the logistics industry. “E-commerce is growing rapidly and warehouses are struggling to find enough labour, especially in remote areas where warehouses tend to be located.”

Some hope to ditch the idea robots need hands. German automation company Festo and China’s Beihang University have built a prototype OctopusGripper, which has a pneumatic tentacle made of silicone that gently wraps itself around an object, while air is pumped in or out of suction cups to grasp it.

The ocean has inspired other robots, too.

A soft robot fish from China’s Zhejiang University swims by ditching the usual rigid motors and propellers for an artificial muscle which flexes. It’s lifelike enough, says creator Tiefeng Li, to fool other fish into embracing it as one of their own, and is being tested to explore or monitor water salinity.

And Bristol University in the UK is working on underwater robots that generate electrical energy by foraging for biomatter to feed a chain of microbial fuel-cell stomachs. Hemma Philamore says her team is talking to companies and environmental organisations about using its soft robots to decontaminate polluted waterways and monitor industrial infrastructure.

This doesn’t mean the end of hard-shelled robots.

SEE ALSO: With population rapidly aging, Japan turns to robots for the future

To be sure, the nascent soft robot industry lacks an ecosystem of software, hardware components and standards – and some companies have failed. Empire Robotics, one of the first soft robot gripper companies, closed last year.

RightHand’s Jentoft says the problem is that customers don’t just want a robot, but the whole package, including computer vision and machine learning. “It’s hard to be a standalone gripper company,” he says.

And even if soft robots find a niche, chances are they still won’t replace all the jobs done by human or hard-shelled robots.

Wrench, whose Cambridge Consultants has built its own fruit picking robot, says he expects to see soft robots working with humans to harvest fruit like apples and pears which are harder to damage.

Once the robot has passed through, human pickers would follow to grab fruit hidden behind leaves and in hard-to-reach spots.

“It’s a constant race to the bottom, so there’s a pressing business need,” Wrench said. – Reuters