A RECENT REPORT has noted despite an overall high adoption rate of IT services by Australians, the country performs poorly in terms of how much it pays for broadband Internet, when compared to 139 other countries on Internet readiness.

“However, it was brought down by the cost of fixed broadband. Affordability is Australia’s lowest performing digital readiness aspect, currently ranked 57th in the world.” 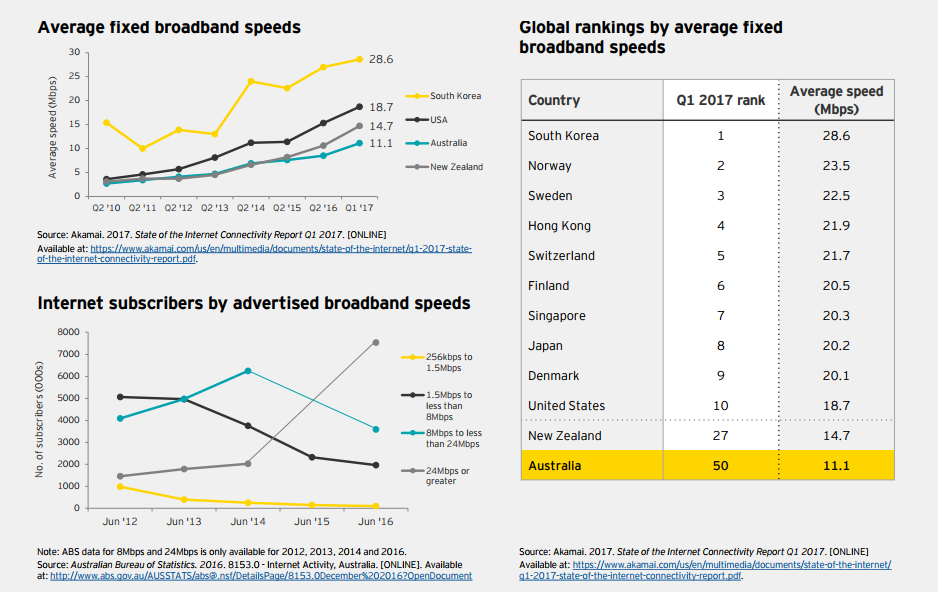 Australia was also beat out by regional neighbor Singapore – ranked 7th best in the world in terms of broadband speed – as well as Japan, Finland, Canada and Luxembourg. Embarrassingly, New Zealand ranked 27th, while South Korea came out on top with an average speed of 28.6Mbps.

This is all despite the fact 56 percent of Australian consumers think their digital infrastructure is on par with or more advanced than most other countries, a 12 percent increase from the previous year.

What these numbers show, however, is Australians may well have to wake up to the reality their efforts to move into the digital future might need a bit more work. The lack of more affordable quality broadband will constrain the ability of consumers to adopt more IoT technology and hamper the digitization of business processes.

“Australia remains caught in the shadow of other advanced nations,” the report said, adding considerations to the country’s relatively small population and large size contributing to the need for consequently higher investment.

However, those are challenges to be overcome, and Australia’s ability to compete on the global stage is severely hindered by its lack of strong connectivity.

“The reality is that the world won’t wait and the barriers aren’t relevant in a competitive global context.”

This an old complaint, with The Australian stating last December the country’s Internet speeds were toast compared to largely rural Kazakhstan.

“We’re paying billions and billions of dollars to speed up our Internet through the NBN rollout, but we’re still falling behind, so what gives?” The Australian’s Chris Kohler wrote.

Australia’s NBN, or “New Broadband Network” is a government-led initiative aimed at bringing Australia into the digital age. When surveyed, 63 percent of Australians expressed support for the program. They also believe the country needs a total overhaul of its systems to include new technologies to facilitate the country’s transition into a “world-class digital economy”, according to News.com.

However, that dream has largely been little more than a surge of optimistic pageantry; customers reported the transition has been anything but smooth and there has been no improvement to the overall speeds of Internet connections.

Complaints have been coming in since 2014 – might be safe to say Australia’s Internet Age is not off to a golden start.