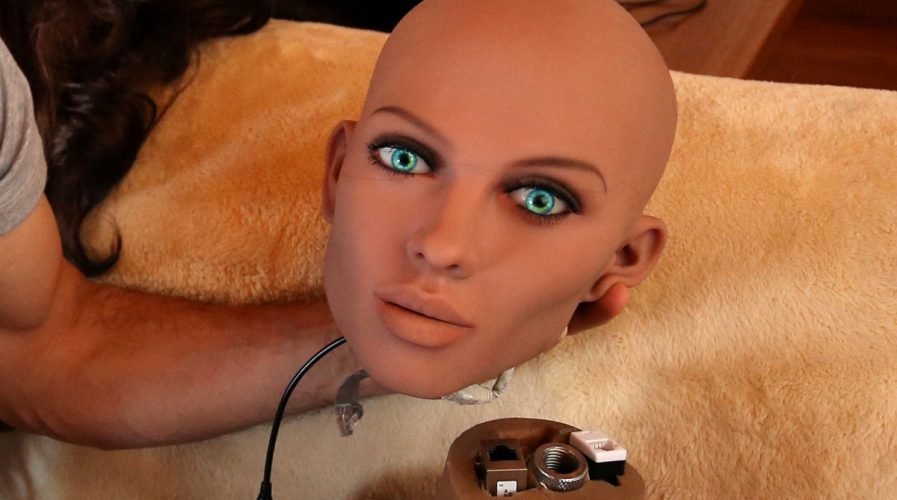 (File) Catalan nanotechnology engineer Sergi Santos holds the head of Samantha, a sex doll packed with artificial intelligence providing her the capability to respond to different scenarios and verbal stimulus, in his house in Rubi, north of Barcelona, Spain, March 31, 2017. Source: Reuters/Albert Gea

We need to talk about sex, robot experts say amid ‘sextech’ boom

MOVE over blow-up dolls, the sex robots are here.

Artificial intelligence (AI) is making its way into the global sex market, bringing with it a revolution in robotic “sextech” designed to offer sexual gratification with a near-human touch.

In a report on the growing market in sex robots, the Foundation for Responsible Robotics said rapidly advancing technologies have already led to the creation of “android love dolls” capable of performing 50 automated sexual positions.

They can be customised down to the nipple shape and pubic hair colour, and can cost between US$5,000 and US$15,000.

The increasingly life-like robots raise complex issues that should be considered by policymakers and the public, the report said — including whether use of such devices should be encouraged in sexual therapy clinics, for sex offenders, or for people with disabilities.

Noel Sharkey, a professor of artificial intelligence and robotics at Britain’s University of Sheffield, said it was difficult to predict how far or fast the market would grow, or what its effect on societies might be in years ahead.

“Will these robotic dolls be niche? Or will they change societal norms and become widespread?,” he asked at a news briefing. “How would (sex with a robot) equate to a truly human intimate relationship?”

The report looked at some of the most contentious issues, asking academics, members of the public and the sex industry for their views on whether, for example, sex robots might be helpful in reducing sexual crimes.

It found “major disagreement” on this question, with some arguing that having sex with a robot would reduce attackers’ desires to harm fellow humans, and others arguing that allowing people to live out their darkest fantasies with robots would have a pernicious effect on societal norms.

On the issue of “meaningful” relationships, the report said that with current AI technology, and even in the foreseeable future, no human-to-robot feelings would ever be mutual.

“The best robots could do is ‘fake it’,” it said. “Robots cannot feel love.” – Reuters